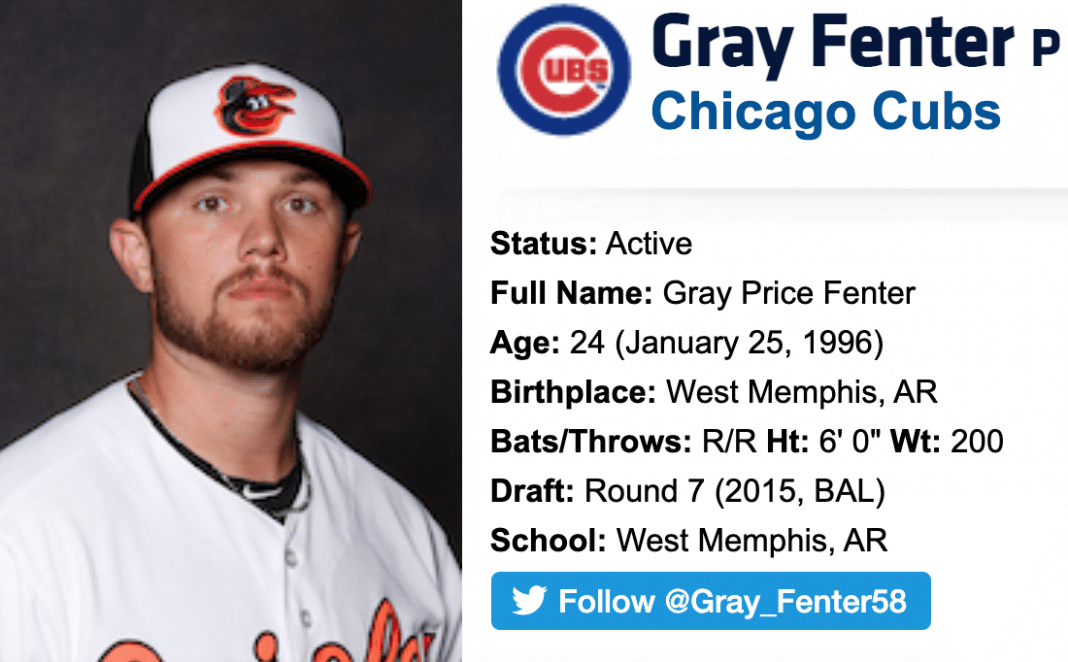 On the final day of the 2020 MLB Winter Meetings, the Chicago Cubs selected right-handed pitcher Gray Fenter in the rule 5 draft from the Baltimore Orioles.

Fenter, 24, had a sub-2 ERA pitching in Single-A ball during the 2019 season in the Orioles farm system.

Cubs pick RHP Gray Fenter from the Orioles in the MLB phase of the Rule 5 Draft: https://t.co/EZRjV04R1W

Fenter joined the Orioles organization in 2015, when he was picked in the seventh round of the MLB Draft. From 2015-19, Fenter made 70 total appearances in the minors, starting 49 games and recording a 3.21 ERA in 230 innings. In 2019, Fenter put up fantastic numbers in A-ball, ending the season with an 8-2 record, 1.81 ERA and 1.10 WHIP. He made 17 starts and five relief appearances, pitching a total of 94.1 innings. Fenter posted big strikeout numbers, fanning 123 batters. The right-handed pitcher was especially dominant against right-handed hitters, holding them to a .163 batting average and extremely low .232 slugging percentage in 2019.

In 2016, Fenter had Tommy John surgery that forced him to miss the entire year and was then limited to only 114 innings combined in 2017 and 2018. However, the 2019 season definitely showed by Fenter was given a $1 million signing bonus, which was well above his slot value when he was drafted in 2015.

Because of the Tommy John surgery and the time it took for Fenter to fully recover, fans have not seen a bunch of the right-hander at the minor league level. He’ll be 25-years-old once Opening Day arrives for the 2021 MLB regular season, but here’s just a glimpse on the kind of stuff that Fenter possesses and why the Cubs took him in today’s rule 5 draft.

The following is from this past April. Via MASN.

His manager with Delmarva last season was Kyle Moore.

“His fastball is plus, it’s in the 95-plus range and has big-time backspin on it, so it’s a swing-and-miss pitch,” said Moore. “His curveball is his best pitch, kind of what I would call a hammer curveball. Kind of straight down, like 12 to 6 with big-time spin on it. Those two pitches alone allow him to survive.

“He’s developing the other two: a changeup and slider. We would always remind him to throw those pitches and he did a great job of owning it and throwing the pitches. Next thing you know, his slider showed up and then he had three (plus pitches). He was special. That slider never got squared up. He has weapons and he definitely has the stuff to go get outs.”

So, with Fenter the Cubs are getting a right-hander with a 95mph fastball that’s paired up with what sounds like a nasty-looking 12-6 curve.

Every MLB has a rule 5 draft. It begins with a three-round MLB phase, as a team can pick any player from a different organization that has not been protected. The cost of selecting a player in the Major League phase is $100k. To keep that player selected, he has to remain on the club’s MLB active roster for the entire season. That could also include at least 90 days and then the rest on the injured list. If not, the player must be offered back to the team he was taken from for a $50k fee. The players who make up this pool are guys who are not on a 40-man roster and have been in the minors for at least three years.

The Cubs did not lose any player in the Major League portion of the rule 5 draft.

There’s also a minor league phase in the rule 5 draft and the Cubs selected two pitchers. The first was right-hander Nicholas Padilla from the Tampa Bay Rays. Always a good thing to grab a pitcher from the Rays’ farm system. Padilla, 23, was 7-2 with a 3.48 ERA in 2019 pitching at the Single-A level, his first full year as a reliever in the minors.

The Cubs also picked up right-handed pitcher Samuel Reyes from the Pittsburgh Pirates. Reyes, 24, had a 2.29 ERA in 70.2 innings at Single-A ball during the 2019 minor league season.

Although no one was lost in the Major League phase of the rule 5 draft the Cubs did lose a pair of players in the minor league portion. 25-year-old pitcher Jeff Passantino was scooped up by the Pirates, while 21-year-old pitcher Yunior Perez went to the Detroit Tigers.