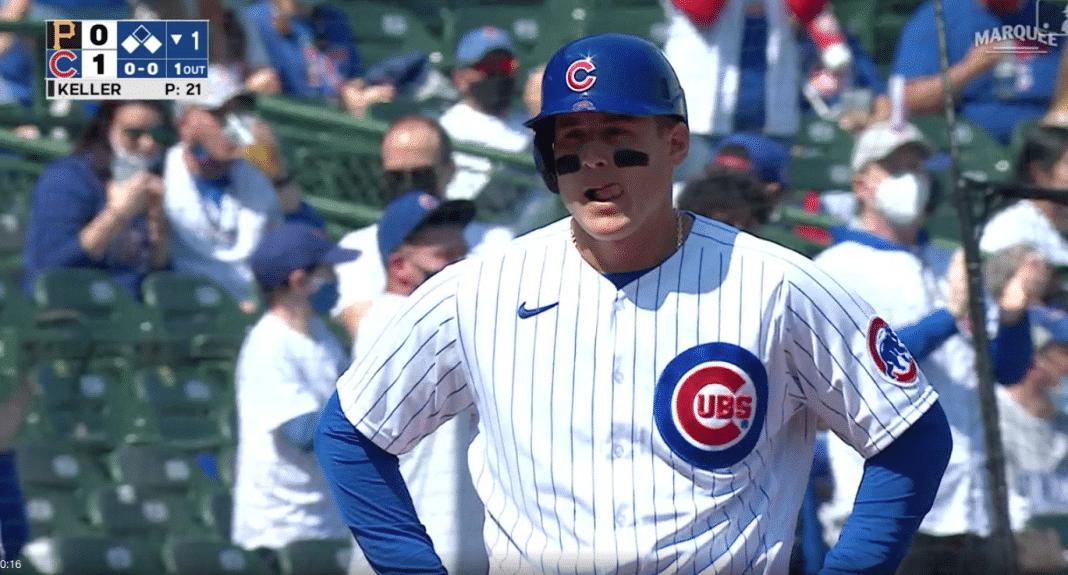 Davies caps off a quick 9-pitch first by striking out Bryan Reynolds on three pitches.

Ian Happ back leading off and he gets things going with a walk against Mitch Keller.

Willson Contreras strikes out swinging on a curve ball in the dirt.

Joc Pederson falls behind 0-2, but he ends up driving in Rizzo with a fielder’s choice to first. 2-0 Cubs. Bryant moves up to second on the play.

Javier Báez strikes out swinging on a high fastball.

Cubs see 31 pitches from Keller in the first.

Colin Moran swings at the first pitch and another easy out as he grounds out to Eric Sogard at second.

Phillip Evans smacks one on the ground for a base hit to left.

Davies picks up his second strikeout. Michael Perez chases a nasty change up.

Another deep count against Keller, but Jason Heyward ends up flying out to Polanco in shallow right-center.

Another fly ball off the bat of Sogard. Polanco makes the catch.

Keller strikes out Davies looking. Nothing doing for the Cubs in the second, but Keller already at 50 pitches.

Jorge Alfaro flies out to Happ in center.

Davies makes a nice play on a come backer off the bat of Keller. Another easy out on soft contact.

Frazier with a good at-bat. Takes a few borderline pitches, works a full count and draws the two-out walk.

Davies gets another fielding chance and he throws out Newman.

IAN HAPP WITH A BOMB!

Ian Happ with his first HR of 2021! pic.twitter.com/MvTrX8gHQu

Another tough at-bat for Contreras, who strikes out looking.

Rizzo draws his second walk in as many plate appearances. Rizzo then steals second base!

Cubs 4-for-4 in SBs this season. Maybe they're a speed team now?

Pederson goes after the first pitch and grounds out to Keller. Rizzo and Bryant go to second and third.

Báez flies out to right field.

Davies makes quick work of Reynolds again, striking him out on three pitches for the second time. Another great change up.

Moran strikes out swinging on a change up.

Evans grounds out to third and Rizzo makes a great play over at first on the throw from Bryant.

Keller is done after throwing 77 pitches in three innings. Great job by the Cubs staying patient from the start. Chris Stratton in for the Pirates.

Heyward with a smash, but Frazier gets in front of it at second.

Sogard grounds out to Newman at shortstop.

Perez grounds out to second, but on the play Polanco moves into scoring position.

Alfaro flies out to Heyward in right and Polanco tags up to third.

Dustin Fowler pinch-hits and Davies records his fifth strikeout. Another nasty change up.

All right, I can get used to Davies striking everyone out with a change up pic.twitter.com/XtckndStmE

Duane Underwood Jr. in to pitch for the Pirates. He struck out the side on Opening Day.

Happ lines out to center.

Contreras called out on strikes. That’s three for him, but the last two have been on almost perfect pitches.

Rizzo grounds a ball to the right side. Moran can’t get it, but Frazier makes the play behind him and throws out Rizzo from the outfield grass.

Happ sprints in from center and makes a sliding catch on a blooper from Frazier.

Newman grounds out to Javy.

Reynolds beats the shift and singles to left field.

Moran lays off the first three, Davies comes back to make it a full count, but Moran homers to left field and all of a sudden it’s only a 3-2 lead for the Cubs. Ball did get some help from the wind.

Evans reaches on an infield single, beating out Bryant’s throw from third.

Davies gets ahead of Polanco 1-2, but the command just isn’t there anymore and he walks the lefty. David Ross takes Davies out. Dan Winkler coming in.

Oh shit! That looked scary off the bat. Perez flies out to Happ on the warning track in center. Phew!

Bryant with a leadoff double against Underwood.

Pederson grounds out to the right side. Bryant moves to third.

Cubs catch a break. Javy’s smash to third gets past Evans. Bryant scores on the E5. Lead now at 4-2.

So far in this opening week series the Cubs have driven in 8 of 11 runners from third base with less than two outs in an inning.

Wild pitch from Howard and Báez goes to second.

Bote falls behind 1-2, but he doesn’t chase and draws a walk. Bases loaded!

Howard makes a great play on a come backer off the bat of Duffy. A 1-2-3 double play gets the Pirates out of the bases loaded jam.

Alfaro gets behind in the count 0-2, but then takes a borderline pitch on 3-2 to walk.

Erik Gonzalez pinch-hits for Howard and he pops up to Bote.

Frazier lines one to Bryant at third and he doubles off Alfaro at first.

Rough afternoon for Contreras. He strikes out swinging, fourth strikeout.

Crick comes back to get Rizzo on a pop up to Frazier in shallow right field.

Bryant pops up behind second base. Cubs can’t cash in the leadoff walk.

Tepera in his second inning of work out of the bullpen.

Newman grounds out to Bote at second.

Left-hander Rex Brothers coming in to pitch for the Cubs.

Reynolds grounds one slowly to short, but Báez can’t make the play on a bare-handed attempt to field the ball.

Moran with another big hit, doubles to left. Pirates with runners at second and third with only one out.

Evans with an RBI-single to right. Pirates within one and they have runners on the corners. Brothers staying in.

Huge double play! Rizzo with another great play on a bad throw from Javy to keep the Cubs up 4-3.

Pederson fouls out to third.

Javy with more hard contact, but it’s right at Newman.

Heyward smashes one to right field, but Polanco makes the catch shy of the warning track.

Craig Kimbrel in for his first save chance of the season.

Alford called out on strikes.

Wilmer Difo lines out to Javy and it’s over!

So far, so good for Kimbrel. 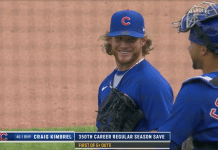 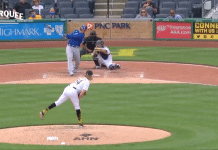