Have you ever wondered why Michael Jordan never appeared in any popular videos games when you were a kid? There’s a very interesting, yet perplexing reason for this. The easiest way to explain this is to take you through a series of events. Let’s begin.

The first video game featuring Jordan was a classic, featuring both a 3-point shootout (Bird only) and a slam dunk contest (Jordan only). I was always hoping to find a code to help Bird kiss the rim, but it never happened.

Michael Jordan and Larry Bird dominated NES back in the late 80’s early 90’s. Jordan vs. Bird was a classic. 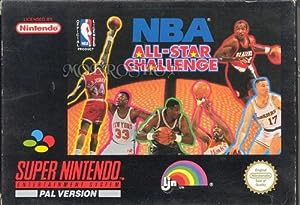 NBA All-Star Challenge (SNES, 1992)
There was only one selectable player from each team. That player on the Bulls was Michael Jordan.
Bulls vs Blazers and the NBA Playoffs (SNES, 1992)
Finally, real Michael in real team basketball! This game was the very early predecessor to the EA’s NBA Live series, which stretched from NBA Live 95 to NBA Live 10.

NBA Showdown (SNES, 1993)
This was basically Bulls vs. Blazers, but with all the officially licensed teams and players. So there was that.

Michael Jordan Chaos in the Windy City (SNES, 1994)
As NBA games started to evolve, with changing camera angles, different modes and improved controls (like the revolutionary turbo button, which eventually became standard), Jordan was absent from most of them. Instead, his likeness graced the cover of this title, a side-scrolling action platformer. You control Jordan, and you attack by throwing basketballs at enemies.

NBA Live series (SNES, Playstation, PS2, XBox360)
Jordan was in NBA Live 2000 in the one-on-one mode and he was also on the 90’s all-decade team in NBA Live 2004. And yes, he was selectable as a player on the Wizards during his last, ill-fated final comeback, but we never speak of the Wizards years.

Jordan appeared in several video games leading up to the year 2000, and 90’s kids loved them. “Jordan dropped out of the virtual scene when he opted out of the National Basketball Players Association’s shared licensing agreement after ushering in sports gaming on the Sega Genesis and Super Nintendo in the early ’90s.

This caused video game companies to get resourceful, and through various codes, create-a-player features and special individual licenses, MJ appeared sporadically in pixels and polygons, until finally signing with 2K Sports for a series of games that lived up to his legacy.” (ESPN)

All players in the NBA typically fall under the group licensing agreement shared between the players’ union and the league, but in 1992 “His Airness” negotiated his own separate agreement. This prevented him from appearing in video games that featured NBA players, instead of just him. (Jordan vs. Bird)

2K Sports signed Jordan to an exclusive licensing deal, then went all out, creating what is arguably the greatest replication of an athlete in video game history. The only thing missing is his gold hoop earring.

“It’s a long way from the first game I was in, but it just shows you the technology that’s evolved over the years, ” Jordan said.

So Why Wasn’t He In Games

The surface reason is money. Jordan declined to join the NBA in the early 90’s because he was arguably bigger than the league. Therefore, he chose to sign his own personal licensing agreement. However, when Jordan was asked about this, it was more then money:

“I didn’t want them to put me in there if it didn’t look like myself, and I didn’t want them to put stats that weren’t my stats. The guys at 2K are very smart, so they know a lot of things about the game of basketball, and obviously, the things that I’ve done to the game and the way that I played. I wanted my character to be as close to the way I played as possible, so that it’s not something that’s false-promoted. I wanted something real.” – Michael Jordan

Michael Jordan wanted something “real.” He didn’t want to be just another roster player for NBA games, he wanted games designed specifically around his likeness and talents. This selfish way of thinking is the real reason why Jordan never appeared in any video games. He always thought of himself as bigger than the league, this is a prime example.

But, when you’re the G.O.A.T you can do as you please.

The only people who really missed out were the kids of the late 90’s and early 2000’s.

why was mj never in video games - howinfo.org