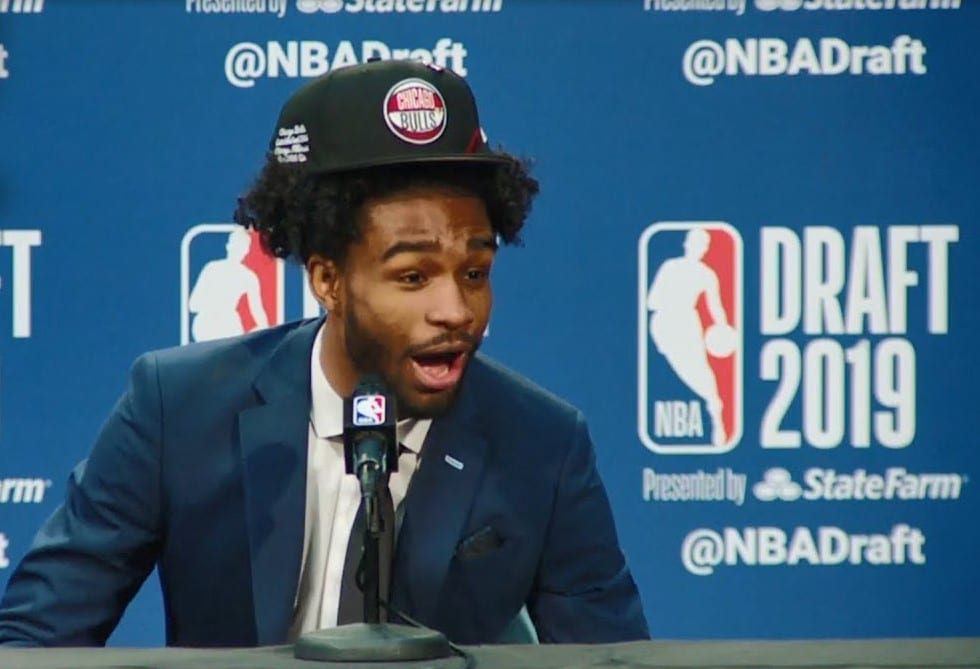 The Bulls beat the Toronto Raptors 114-102 last night to keep their playoff chances alive. While the playoff picture is tbd there’s one thing that’s here now and should have Bulls fans excited. Bulls point guard Coby White has made a resurgence as of late. Over the last ten games, White has averaged 17 PPG, 42.7 %FG, 5.8 APG, & 3.7 RPG. He’s been clicking well with Bulls center Nikola Vucevic and appears to be benefiting from his presence. Last night he made sure that everyone knew who he was with an emphatic dunk.

Bulls announcers had the best call on this Coby White dunk 😭 pic.twitter.com/Hb3aE36IGD

This dunk was a statement-type dunk. Bulls fans are hoping this dunk was Coby showing us he’s ready to take the next step. Regardless of what it could mean this dunk was a thing of beauty. Coby knew he was taking it to the rack and it didn’t matter who was in his way. If you listen in on that dunk you can hear none other than Bulls color commentator Stacey King. His commentary after that dunk made it just that much better.

The video of White’s dunk along with King’s commentary was watched all over once it was posted to social media. This caused some NBA fans to make comments about Stacey King trying to compare him to Hornets announcer Eric Collins. No disrespect to Mr. Collins but that comparison is ridiculous.

Lol at the casuals saying Stacey is trying to be like Hornets announcer Eric Collins.

Stacey has been giving the hot sauce for well over a decade folks.

King has been the Bulls color commentator since 2008 and he’s been dishing out his takes like this for years. He’s always been one to react to a big dunk or a big play. This comparison stirred up some discussions on social media. Bulls fans all over made sure that King got the respect he deserves. Coby unknowingly exposed the casual NBA fan.

Coby has been putting on a show

Coby’s dunk last night was another taste of how good and explosive he can be. His teammates and coaches know his potential. You could see after he made that dunk how hyped the team was for him. Teammate Lauri Markkanen had a great reaction to his dunk.

You can tell that everyone on this team is pushing for White to succeed and only want to see him do well. Coby appears to be looking at things the same way. White was benched midway through the season and the way he has come back down the stretch has been huge. It has shown his maturity and growth as a player. He touched on that after last night’s victory.

Coby White: "A lotta guys my age, especially being taken out of the starting lineup, you coulda handled that two different ways. You could've pouted and just said, 'Forget it. F it.' Or you coulda just kept playing and get better. And I chose to continue to stay on the grind."

It’s clear that White has in fact stayed on his grind and it’s paying off. A lot of people had given up on White but he has come back and shown that he can be a good player for the Bulls. Head coach Billy Donovan wanted him to be the floor general for this team but that doesn’t look to be the best role for him. While he’s improving he is much better suited as an explosive shooting guard. However, as the season has rolled on he’s certainly improved on his facilitating.

The main reason people gave up on Coby was that they wanted him to be a true PG. Coby isn’t at that level yet to be a true floor general. So when it wasn’t working Donovan decided to have him come off the bench and continue developing. It’s looking like that may have paid off. Over his last 16 games, he’s averaging 5.9 assists per game. While he’s certainly got room to grow this is encouraging.

10 assists for Coby tonight. He’s improved considerably as a facilitator this season. A Portland-East type of backcourt is still a possibility with the way Coby has improved down the stretch.

There’s still hope that Coby can be the Bull’s point guard. He seems to work better when he can catch and shoot and get his own offense instead of facilitating for others. Billy Donovan knows that and also knows the addition of center Nikola Vucevic has helped White.

Billy Donovan believes Nikola Vucevic and Coby White are two players who needed each other.

Vucevic needs shooting around him, and White is best at spotting up and also using that shooting threat to blow past closeouts — and Vucevic's post threat helps White do that.

I would say with the way White has ended the season and the way Vucevic and Coby are playing together that he will be around next season. His offensive potential is just too high at this point to move him. Granted the Bulls front office is focused on improving and if Coby is a piece that needs to move to do that I could see them doing it. There is still a lot to be determined in this offseason but White has certainly made his case to stay.