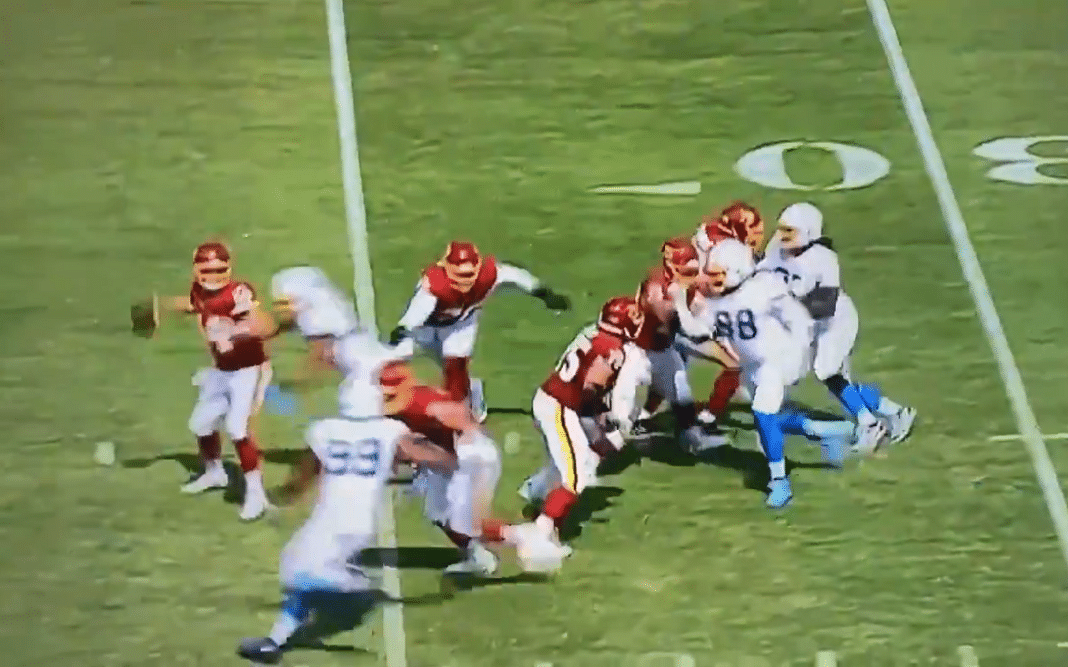 The Chicago Bears made a somewhat surprising decision when they chose to cut left tackle Charles Leno Jr. a few months ago. This after drafting a pair of tackles and in need of salary cap space. Suddenly the man who’d manned that position since 2015 was gone. A lot of people were quick to criticize it, feeling the Bears had no reason to do so. Leno may not be elite but he was at least serviceable.

Was he though? Last season the veteran allowed 31 pressures and five sacks on the season for the Bears. Nobody would even call that average. It was bad. Especially given the money Chicago was paying him. They could almost certainly find somebody of the same quality who is way cheaper. So they did, cutting Leno and signing veteran Jason Peters. Leno wasn’t unemployed long. He quickly signed a deal with the Washington Football Team and became their starting left tackle.

Many felt Washington had gotten a steal.

It hasn’t taken them long to realize that mistake. During the first half of their game against the Los Angeles Chargers, Leno was abused in pass protection on a number of occasions. The most egregious came when backup pass rusher Uchenna Nwosu beat him easily with an inside move that destroyed quarterback Ryan Fitzpatrick. The veteran soon left the game with a hip injury. Bears fans will have vivid memories watching the replay.

Charles Leno is not a bad guy. He’s a great guy and a huge success story. Going from 7th round pick to long-term starter deserves a lot of praise. Especially as an offensive tackle. However, there comes a point in time where a team shouldn’t be satisfied sticking with mediocrity anymore. Leno had become far too expensive to keep. His play has been in decline for the past two years. It was time to move on. This video just offers more proof.