Trevis Gipson has been a revelation this year. The former 5th round pick didn’t do much during his rookie season. Part of that was learning a new position (moved from defensive end to outside linebacker) and part of it was a lack of opportunities. Would he be able to make progress going into a critical second season? People have gotten their answer on the field. After dominating the preseason, Gipson now has a sack in back-to-back wins over the Detroit Lions and Las Vegas Raiders.

How good has the kid been? Here’s some context. Through the first five weeks, he has eight pressures including two sacks this year. This came on 34 pass rush snaps. Jeremiah Attaochu, the veteran Chicago signed in free agency, has played 68 snaps. He has five pressures. Akiem Hicks has seven in 78 snaps. This should provide a good idea of how disruptive the young outside linebacker has been.

That isn’t the best part though.

It’s the attitude Gipson is operating with. Sacking the quarterback isn’t enough for him. He has taken things a step further. How? By actually tagging said quarterback on Instagram after the game with a photo of him sacking them. Coupled with a fun quote on top of it all. Last week he trolled Jared Goff with a line borrowed from “Rowdy” Roddy Piper. This week he nailed Derek Carr with a Las Vegas tribute. 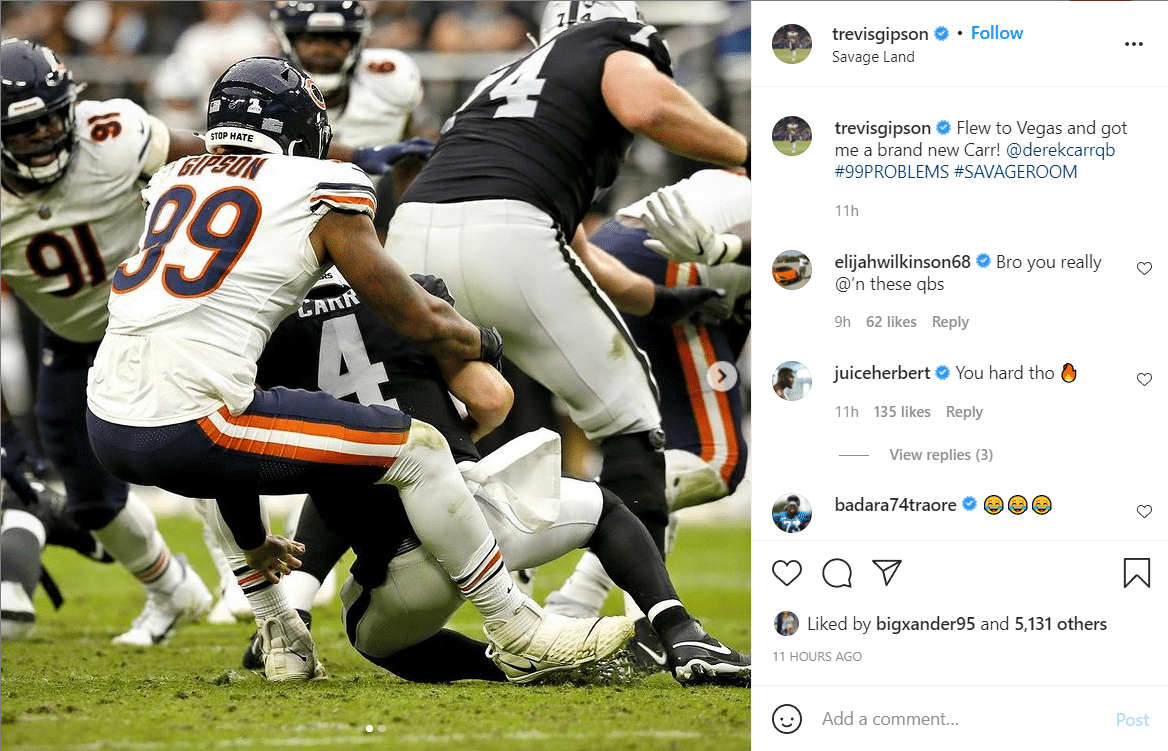 Posting the photo and the line by itself would’ve been fantastic. Yet to actually tag Carr himself on top of it? That makes the post so much better. Gipson isn’t afraid to let everybody hear it. There is a new kid on the block and he isn’t going away. Carr was merely the latest victim. He likely won’t be the last.

One where the Bears seem to have a lot of young talent slotting into place on defense. There were genuine fears about age becoming a factor on that side of the ball. Khalil Mack, Hicks, Robert Quinn, Danny Trevathan, and Tashaun Gipson are all in their 30s. Is the unit destined for another collapse like 10 years ago? Not exactly. This is because a youth movement has begun right before their eyes.

Roquan Smith has emerged as one of the best inside linebackers in football. The same goes for Jaylon Johnson at cornerback. Bilal Nichols remains a strong interior presence on the defensive line. Now suddenly Trevis Gipson is emerging as a young pass rusher. The Bears seem to have good players emerging at every level of the defense. All of them are 25-years old or younger. This is great news for the future.

The Bears need to do one thing now.

Give Gipson more opportunities. He is maximizing what he’s done thus far. Logic dictates they get him on the field more often in order to do it more. Just imagine what he might have in store for Aaron Rodgers or Tom Brady in the next couple of weeks. It would make his Instagram must-see stuff.