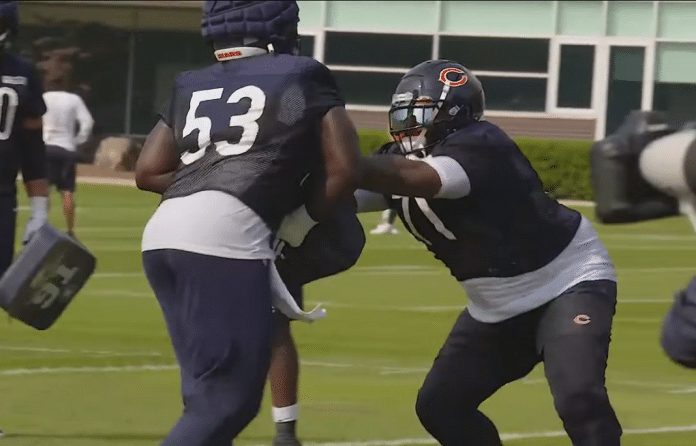 Jason Peters told the Philadelphia Eagles he planned to play one more year at the end of last season. It was clear the future Hall of Famer didn’t want to go out as he did. Missing eight games with injuries and playing on a 4-12 team. Ever the competitor, he wants to go out on a higher note, preferably with a chance to compete for a Super Bowl. That is the main reason he signed with the Chicago Bears.

However, Peters wasn’t under any illusions. At age 39, he is ancient by offensive tackle standards. So teams weren’t exactly going to be knocking his door down with offers. He’d have to be patient, stay in shape, and wait to see if an opportunity opened up. Sure enough, that came to fruition when the Bears lost rookie tackle Teven Jenkins to back surgery. Suddenly their left tackle spot was in serious danger. So offensive line coach Juan Castillo decided to make a phone call to an old friend.

The best part is when Peters ended up receiving it.

Peters’ home is in Texas. He and Castillo have a relationship that goes back many years. The Bears’ offensive line coach was the one who convinced the Philadelphia Eagles to trade for the left tackle back in 2009. He felt the Buffalo Bills had misused him as a blocker. An assessment that proved correct the following years. So Castillo decided to call on his old friend for help once more. Peters’ reaction? Priceless.

Having been around the league long enough, he undoubtedly could’ve guessed what the call was about. The Bears had problems at tackle and had a need for his services. Shortly after that, the two sides came to an agreement. Now the big man is trying to knock off the rust as quickly as possible before Week 1 in Los Angeles.

Jason Peters can still help the Bears if healthy

That is usually the key for guys his age. Only four tackles including himself have ever played an NFL game at age 39 or older. None have managed to make it through a full season healthy. So Peters is facing a tough battle against Father Time in this one. Especially with the league expanding to a 17-game schedule. When healthy, even last year, he showed that he can still be a more than competent blocker.

All the Bears can do is hope that he doesn’t suffer any major setbacks. In the meantime, it would be wise for them to continue developing Larry Borom. The rookie 5th round pick was shifted to left tackle in training camp after the team saw how good he looked in pass protection with his footwork and quickness. It is possible they’ll have need of him this season if Jason Peters does miss time.

The good news is the position at least seems settled.

Chicago has gone through most of the preseason with guys like Elijah Wilkinson and Lachavious Simmons are their primary starters. The results have been predictably hard to watch. With Peters in the mix and Germain Ifedi finally back from a hip injury, some stability should follow.