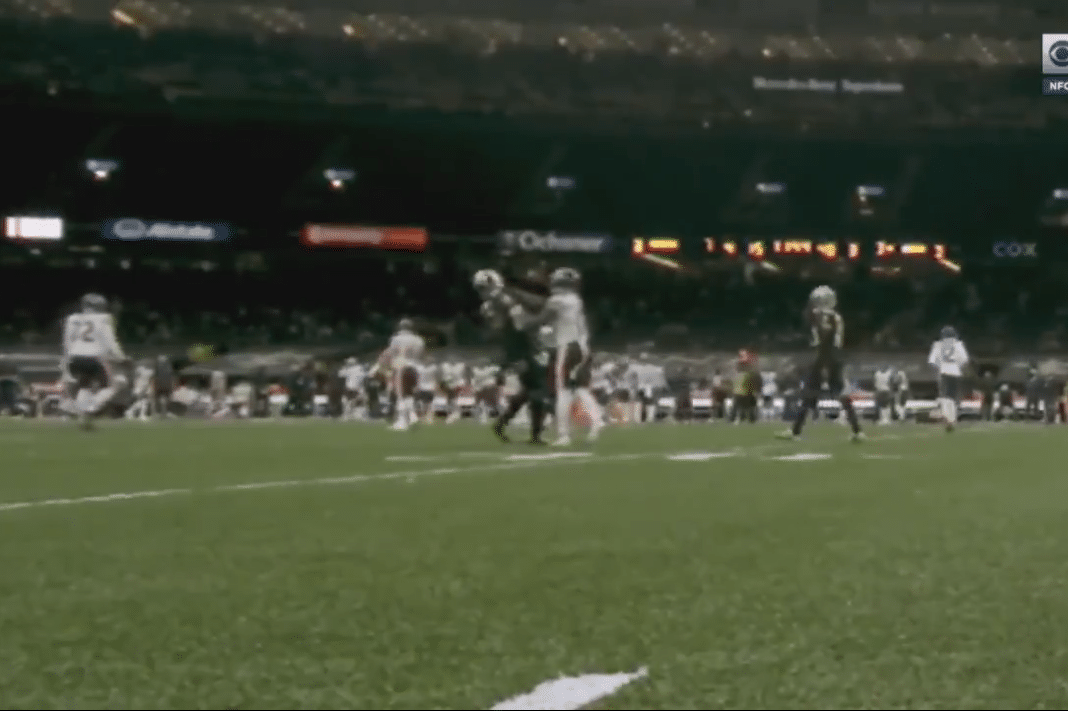 CJ Gardner-Johnson has to be one of the greatest trash talkers in the modern NFL. He’s the only guy who got three different receivers to punch him in the head over the course of the last couple of months. What he’s done to the Chicago Bears alone deserves special mention. Everybody remembers Javon Wims taking a swing at him back in November. So there was no way the coaches would let it happen again, right? Enter Anthony Miller.

Despite the Bears only trailing 7-3 in the 3rd quarter, the mercurial wide receiver encountered the Saints defensive back. Sure enough when Gardner-Johnson got in his ear, Miller turned around and threw a stiff right jab in his face. As with Wims, the refs threw the flag and tossed Miller from the game. A brutal loss for a Bears offense that already didn’t have Darnell Mooney.

Yet the story doesn’t end there.

Remember back during the first game when receivers coach Mike Furrey said that he told his receivers to avoid Gardner-Johnson? Then Wims went out on the field moments later and took his swing. Head coach Matt Nagy wanted to make sure the point got across this time. In the lead up to the playoff game, the team spent 10-15 minutes making it crystal clear to the offense not to engage with the Saints defensive back. They used clips and everything.

Miller was there for it all. He saw everything. Then he goes out and takes a swing anyway. That is the height of stupidity and lack of discipline. Players have been cut for less.

The #Bears showed clips of CJ Gardner-Johnson's taunting during the season to their players on Wednesday. It lasted 10-15 minutes.
Anthony Miller reacted anyway.
UNBELIEVABLE.

Anthony Miller is proving to be a major disappointment

The young man is so obviously talented. When he’s feeling it, he has the capability to take over games. Yet something always seems to go wrong with him. It’s shoulder injuries, it’s running bad routes, it’s dropping easy passes, it’s letting his temper get the better of him. This was supposed to be his breakout season in 2020. Instead, he finished with 485 yards and two touchdowns. The worst season of his career.

Remember the Bears gave up a future 2nd round pick to move up and draft him in 2018. They felt he could become that great slot receiver to complement Allen Robinson on the outside. Then before he knew, his inconsistencies resulted in his snaps being taken away by Mooney who went on to break the team record for receptions by a rookie.

It’s fair to wonder what the future holds for him.

Anthony Miller may not have Ryan Pace to protect him this offseason. The GM is in serious danger of being fired after such a disappointing end to this year. It’s possible the receiver could be cut before playing a fourth season in Chicago. A massive waste of such obvious talent. Yet the reality is he mostly did it to himself. The Bears gave him every opportunity to become a go-to guy. Now he could end up being remembered as somebody who never fulfilled his full potential.

Jaylon Johnson Owns Up To Social Media Outburst As A “Mistake”