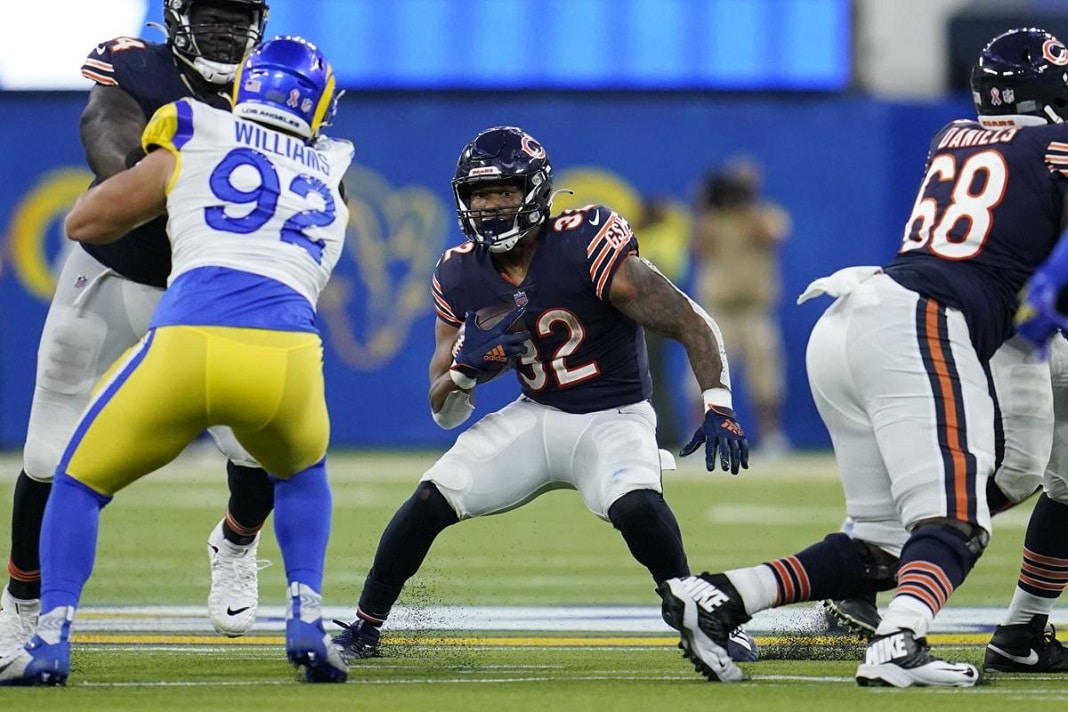 The Chicago Bears have a lot of work to do if they’re going to be anything other than an afterthought in 2021. They were summarily dismissed by the Los Angeles Rams on Sunday night. It was never really close. For once though, most of the ugliness wasn’t on the offensive side of the ball. While they only managed 14 points, the unit moved the ball a lot during the game. Much of this should get credited to their offensive line. Specifically the interior. Among the standouts was James Daniels.

His past several months have been interesting, to say the least. He tore his pectoral in October of last year, missing the rest of the 2020 season. In his absence, the Bears made significant changes to the offensive line. One of them was shifting Cody Whitehair to left guard. A move that yielded great results. Enough to where the team felt it was best to keep him there with Sam Mustipher taking over at center.

That made it clear. Daniels would move to right guard.

His third position in three years. Don’t forget he started 2019 at center. So he had to spend all of training camp and the preseason learning a new spot. Then for good measure? He’d have to play it for the first time against Aaron Donald. That is asking a lot. All things considered though? The guy looked better than anybody had any reason to expect. Not only did he not surrender a single hit or sack on the quarterback, but he also played a big part in David Montgomery going for over 100 yards rushing.

This is important stuff for Daniels. Remember that he is a free agent in 2022. He’s playing for a new contract. One the Bears no doubt would love to give him. They need young guys to start stepping up. Especially on offense. Daniels just turned 24-years old. He can be a big part of their future as the organization looks to start building around Justin Fields.

James Daniels has what it takes to be really good

He flashed that last season. Prior to the injury, there was no debate that he was the best blocker up front for the Bears. That is what made the setback so tragic. Some wondered if this shift to right guard might end up delaying his ascent yet again. It doesn’t seem that way. He won’t be seeing many defensive tackles better than Aaron Donald this year. He’ll only get better as he stacks games this season.

From there, they just might have something going. Sam Mustipher still seems quite comfortable at center. If the Bears can get either Teven Jenkins or Larry Borom to be good draft picks? Then they have the makings of a legitimate offensive line. That will only help Fields towards the ultimate goal of becoming a franchise quarterback. If nothing else? This is a great story for James Daniels.

He had to overcome a lot.

Falling out of the 1st round in 2018. A failed attempt to shift to center in 2019. Tearing his pec in 2020 and now a shift to right guard in 2021. Despite all that, he’s playing good football. Hopefully, the Bears will be able to reward him.