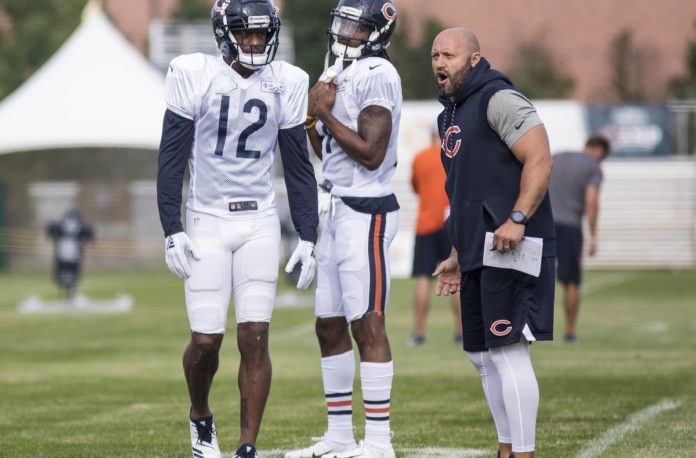 They say a man is only as good as the people he surrounds himself with. When it comes to Matt Nagy, it is natural he’d be a lightning rod for fan anger whenever the Chicago Bears are struggling. That comes with the territory of being a head coach. The fact this team is 1-2 and has one of the worst offenses in the NFL falls on his head. However, the blame for these problems can’t all be the result of one man.

Maybe some of that blame should fall on the shoulders of his staff. It’s their job to make sure this team is ready each week. Yet every single Sunday it feels like the Bears are unprepared and sloppy. When looking at the lineup of names and where Nagy got them from? It shouldn’t be such a surprise.

Two years as an offensive coordinator in 2017 and 2018 with the Cincinnati Bengals produced average results at best. Similar to the average results he got during his two years on the job in Miami as well. Lazor was known for being a solid quarterback coach but that wasn’t enough to find him work in the NFL in 2019. Nobody was knocking on his door either until Nagy came calling last season.

A rising star after helping the Eagles win the Super Bowl in 2017 as their quarterbacks coach. DeFilippo saw that momentum crushed with two failed offensive coordinator stints in Minnesota and Jacksonville over the next two years. Both times he was fired after just one season. Hiring him as a quarterbacks coach made sense. He had a strong track record. So far the results are middling.

Not much to say here. After Charles London left, the Bears needed to find somebody. After more proven options turned them down, they opted to sign Pitre who had some decent success for Oregon State. There is nothing to indicate he’s had much impact.

This was one of the more puzzling hires. While a former NFL receiver, Furrey had no coaching experience at the NFL level. Nor even the top college levels. He was plucked out of a small school. While many felt he was a solid coach at first, time has shown that may not be the case. To date, he hasn’t really developed any of the young Bears receivers into legitimate weapons. Anthony Miller was a disappointment. Riley Ridley was a flop. Darnell Mooney isn’t showing major progress this year either.

The fact he hasn’t managed to stay with a team for too long should’ve been a red flag. Two years in Denver followed by two years in Minnesota. Neither stint lasted long. Then he spent a year out of football before Matt Nagy gave him a call. As is the case with Furrey, the tight ends haven’t really produced as they should. Particularly Cole Kmet who the team had high hopes for as a 2nd round pick.

People were surprised when Nagy fired Harry Hiestand and brought in old friend Castillo. A man who was up there in age and was fired in Baltimore by John Harbaugh. Rarely a favorable sign. Castillo’s tenure to this point can best be called inconsistent. The first half of 2020 was a disaster but the coach did a really good job settling it down after the bye. Now the unit is back to being terrible. Most troubling of all is the overall lack of unity or attitude they play with.

Matt Nagy surrounded himself with castoffs and reaches

None of the guys mentioned above could be called “in-demand” or “up-and-coming.” The mark of any good head coach is how strong he is at building a good staff. Lovie Smith wasn’t always perfect but he had a knack for finding capable assistants. His 2006 staff had two future NFL and college coordinators on it along with one of the most widely respected receiving coaches in the league. Not to mention two future head coaches on the defensive side.

Matt Nagy inherited Vic Fangio from the previous regime. He already purged his offensive staff once and the second version isn’t proving to be much better. While he gets most of the blame for the Bears’ offensive issues, the reality is he didn’t surround himself with the most capable help. It is things like this that lead a team to have one of the worst offenses in professional football.