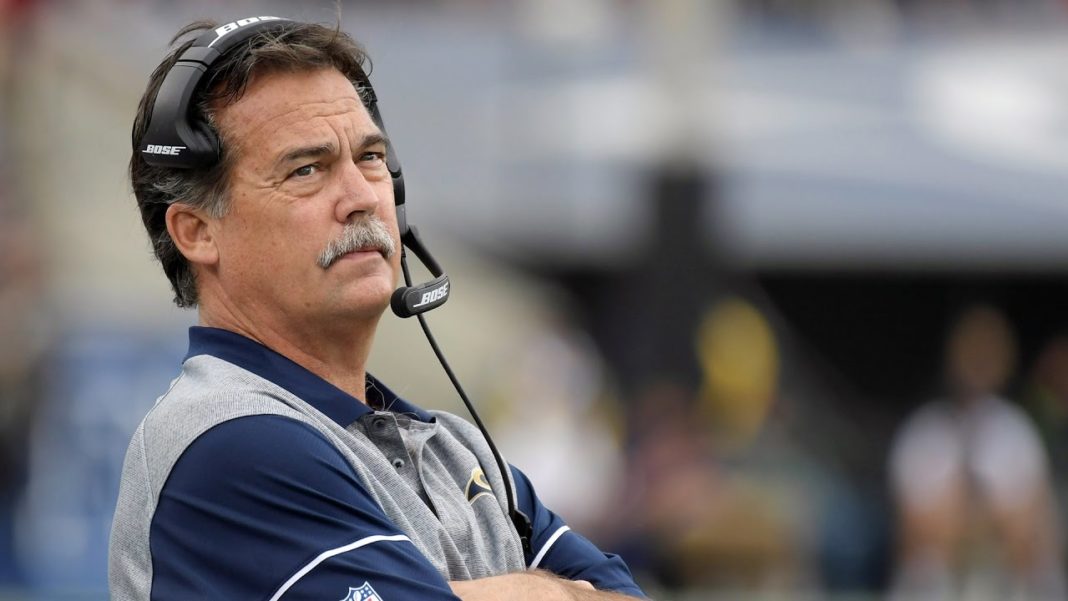 People will automatically scream obscenities at the idea. Jeff Fisher? Jeff Fisher!? That guy isn’t a solution to the Chicago Bears problems. He’s a head coach who failed to produce a winning record in his final seven seasons on an NFL sideline. It doesn’t make sense. Why replace Matt Nagy with a 62-year old who has coached in four years?

That is a fair argument. With the venting out of the way, let us get to the point of this article. It isn’t an endorsement of making Fisher the head coach. No this is something else. It is a push to make him the next team president.

For years now Bears fans have called for the head of Ted Phillips. He’s held the president’s job since 1999. During that span, he’s managed five playoff appearances. Pathetic for an organization like this. Nobody is denying his business accomplishments, but he’s come up painfully short in the win column. People want somebody with a better football sense in charge.

That is where Fisher comes in.

The man has bled NFL football for almost 40 years. He spent five seasons in the league as a defensive back and then another 28 as a coach. Few understand the game at every conceivable level as him. If anybody covers the vision of “football guy” it would be Fisher. Yet the reasons to hire the man goes beyond just that.

First and foremost? Fisher has Bears connections. He played for the organization from 1981 to 1985. He was a member of their last championship team and understands the franchise and its fans well. That is something that would appeal to the McCaskey family. They’ve always liked bringing in people who understand the kind of mindset and expectations this team has.

Now let’s get to the primary reasons Fisher is worth the risk. For starters, he actually does have some executive experience. He was the de facto GM for the St. Louis Rams in 2012 and 2013, making all of their personnel decisions. All things considered, he didn’t do half bad. He executed the infamous draft trade with Washington for Robert Griffin III that landed his team a bounty of high draft choices. Then he secured a number of quality players like Michael Brockers, Janoris Jenkins, Trumaine Johnson, and Greg Zuerlein.

Then there is the track record of coaches in presidential positions.

It’s led to noteworthy success in the past. Tom Coughlin took over the Jacksonville Jaguars as VP of Football Ops in 2017. Thanks to his changes, the team went to the AFC championship that first year. Bill Parcells took over the Miami Dolphins in a similar role in 2008. His moves immediately helped the team improve to 11-5 that year. Their first playoff run in seven years. So this sort of thing has been done before.

Last but certainly not least? Jeff Fisher has an eye for quarterbacks. That became apparent as early as 1995 when he helped the Tennessee Titans draft Steve McNair 3rd overall. He would go on to three Pro Bowls and claim MVP honors in 2003. In 2008, it was well-documented Fisher wanted to draft Jay Cutler out of Vanderbilt but ownership overruled him, desiring Texas star Vince Young instead.

Then during his run with the Rams he signed guys like Case Keenum and Nick Foles as possible starters, believing people weren’t seeing the potential. Sure enough, two years after sharing a sideline together in 2015 they were facing off in the NFC championship. Then there was the bold trade to move up and draft Jared Goff in 2016. While the kid has his detractors, the fact remains he is a two-time Pro Bowler who reached a Super Bowl two years ago.

Fisher understands the importance of quarterbacks. Combine this with his leadership qualities and football experience? Making him the Bears’ team president isn’t the worst idea in the world.