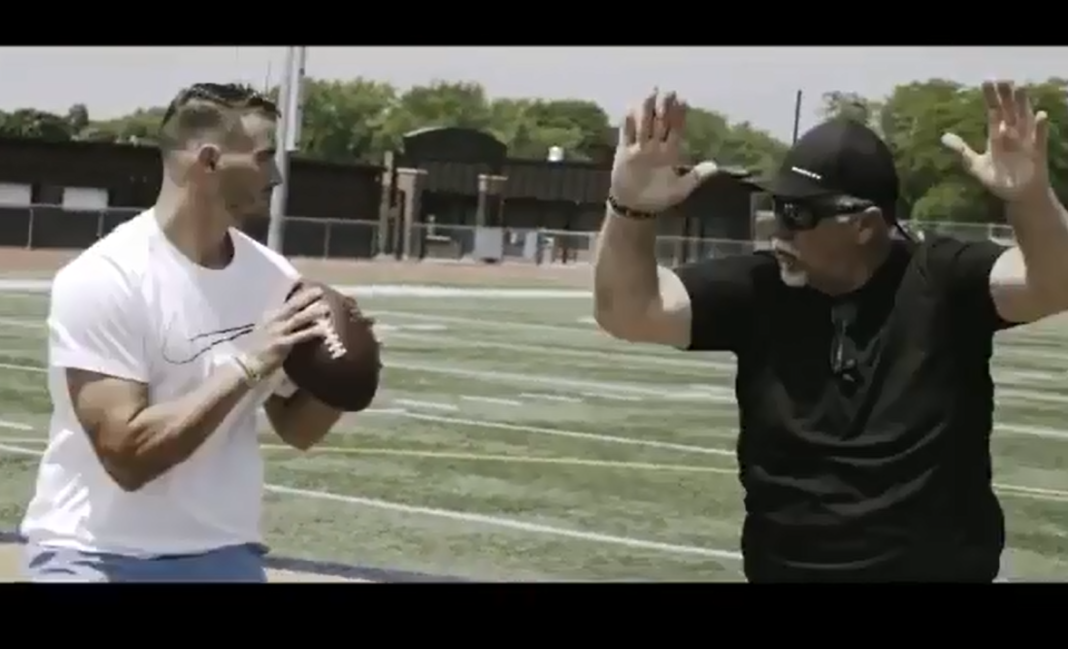 Mitch Trubisky can be called a lot of things. Athletic. Tough. Loyal. Disappointing. All apply. The one thing is he not though is naive. The 25-year old understands his position perfectly well. The Chicago Bears traded for Nick Foles. Then they declined to pick up his 5th-year option. The message was loud and clear. If he wants an NFL future as a starter, he must pull out all the stops to fix whatever problems that plagued him in 2019.

The Bears are trying to help him. They hired both Bill Lazor as offensive coordinator and John DeFilippo as quarterbacks coach. Two men with strong reputations for coaching up QBs. However, Trubisky seems to understand that alone might not be enough. So it appears he decided to seek some outside help.

Video producer George Gaza posted an Instagram video of Trubisky working out with teammates. Among them were Allen Robinson, David Montgomery, Cole Kmet, Cody Whitehair, and Eric Saubert. Most of the video is straightforward. That is until an elderly man in shades popped into frame, running the quarterback through a drill. People might recognize him as former NFL quarterback Jeff Christiansen.

Christiansen can be a huge help to Mitch Trubisky

There are lots of quarterback tutors out there, but Christiansen seems to have gained a stellar reputation in recent years. Perhaps because three of his pupils were playing in the conference championship games this past January. Ryan Tannehill got there with Tennessee while Patrick Mahomes and Jimmy Garoppolo squared off in the Super Bowl. So it’s safe to say Christiansen might be pretty good at what he does.

The man was a former NFL quarterback himself, taken in the fabled 1983 draft. He spent eight years in the league before transitioning to coaching in 1990. Eventually, he established the Throw It Deep passing academy in the Chicago suburbs. His focus as a teacher is getting QBs to focus on organization and details. Two things Trubisky is known for struggling with.

“Our football QB training starts from the ground up, focusing on laying a solid foundation to allow for balance and control. The misconception around the QB position is that you need to have a strong arm to throw the football, but that is simply just not the case. Our training philosophy is 100% based off of biomechanics that allow for maximum performance and minimum stress on the body.”

Christiansen isn’t going to save Trubisky.

Nobody is saying that. Yet this revelation shows that the quarterback realizes that the only person who can save him is himself. Trubisky holds his own fate in his hands. So he’s being proactive, finding every advantage he possibly can to get better. Working with a guy like Christiansen is exactly what he needs. Somebody who won’t sugarcoat his critiques and will hammer home the need for details and discipline.

Will it be enough? The next two or three months will tell the story.