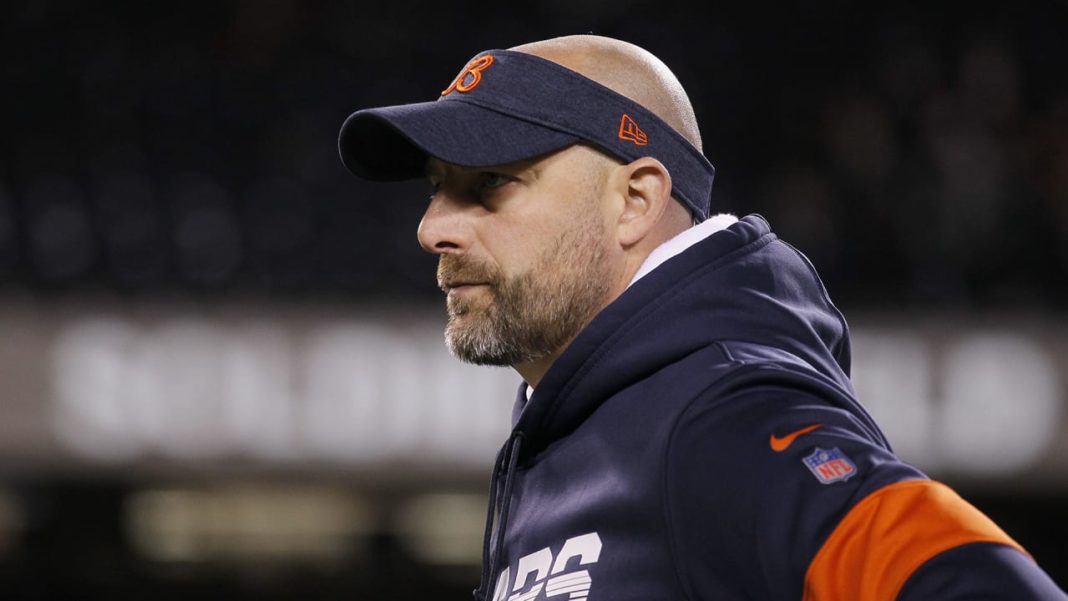 On Tuesday night, it was confirmed by many Chicago Bears‘ sources that both general manager Ryan Pace and head coach Matt Nagy will be retained for the 2021 season. The decision is an intriguing one as the team has finished at .500 the last two seasons and had a very disappointing playoff loss to the New Orleans Saints on Sunday. With a win-now season off-season ahead, Nagy must look back at his first three seasons as head coach and see where he has fallen short.

As has been reported, Bears DC Chuck Pagano is retiring and there is a strong sense that both head coach Matt Nagy and general manager Ryan Pace will return in 2021.

When Pace hired Nagy in January of 2018, one of the main reasons for his hiring was his ability to develop an innovative offensive game plan. Before being hired by the Bears, he served as the offensive coordinator for the Kansas City Chiefs for the last five games of the 2017 season. The Chiefs offense averaged 27 points per game and racked up over 300 yards of total offense in each of those games. Chicago believed that Nagy was going to be the next offensive innovating head coach when they hired him.

Through Nagy’s three seasons as head coach, the Bears’ offense has failed to rank outside the bottom third of the NFL. Since 2018, Chicago’s offense has gotten gradually worse each season to the point that offensive coordinator Bill Lazor took over play-calling midway through this season. Once Lazor took over in play-calling duties in week 10, the offense got progressively better week by week up until week 17.

Four straight games with 30+ points? The @ChicagoBears are heating up… uh-oh. pic.twitter.com/pKG10Xf27Q

Some observers of the team believe the decline of the offense heading into the playoff game against the Saints may have been due to the head coach taking some responsibility of play-calling duties back again. The theory is given credence as Bears’ wide receiver Allen Robinson noted during an interview with ESPN 1000 that he didn’t know who was calling plays over the past few weeks. This only looks bad on Nagy, as there was a clear improvement once he relinquished play-calling responsibilities, only to take them back after the team found success.

Allen Robinson said the last time his agent and the Chicago Bears had any talks about an extension was early in the season.

Robinson said he isn't sure which coach was calling plays in the last couple of games of the season.

There have been too many occurrences over the last two seasons where the Bears offense has failed to have any form of consistency and appear to be unable to out-scheme opposing defenses. In several instances this year, the Bears’ offense either not scored a touchdown until the final two minutes of a game or not scored a touchdown at all. Nagy deserves blame for this issue as time and time again, he has failed to make necessary adjustments or break away from his run-pass option offensive scheme.

I can't remember a more boring, conservative offense than the 2020 Chicago Bears. No energy. No fire. No risks. Just…blah

Nagy Has Failed To Be The Quarterback Guru

The main reason why Nagy was hired was due to his ability to develop and get quarterbacks ready. He served as the Chiefs’ quarterbacks coach for nearly three seasons before becoming offensive coordinator in 2017. During that time, he was credited for Alex Smith’s back to back Pro Bowl appearances in 2016 and 2017. Nagy was hired to develop Bears’ quarterback Mitchell Trubisky and appeared to be on the right track as Trubisky was named to the Pro Bowl in 2018. Since 2018, the Bears’ quarterback play has declined as the team has had three starters, who have all had more futile performances than quality performances.

Matt Nagy is a saint.

He knows how to make life easy on a QB, learning from Andy Reid.

Reid gets the most out of his QBs. https://t.co/LfEH70D0An

Nick Foles, Chase Daniel, and Trubisky have all had games in which they have looked highly inaccurate and unable to execute the offensive game plan during games. To make matters worse, Foles and Daniel have worked with Nagy in the past and are highly familiar with his offensive playbook. This is a massive issue as quarterbacks with prior experience with a playbook are often able to execute game plans successfully, but neither quarterback was able to do so under Nagy.

3. Nick Foles called his comment about Nagy not understanding when certain plays won't work a "miscommunication."

What else was he going to say?

I 100% believe Brian Griese didn't misinterpret anything. Foles has concerns about Nagy's lack of grasp for this.#Bears

Nagy’s failure with Trubisky serves as an even bigger issue as it appeared that the head coach was reluctant to develop a game plan that highlighted his quarterbacks strengths. In four of the Bears’ final five games of the season, the offense averaged over 30 points per game as their quarterback was a large reason why. The Bears coaching staff developed a game plan tailored to Trubisky which included bootlegs and half field reads. This lead to the Bears’ quarterback having a quarterback rating of 97 or higher in four consecutive games.

Mitchell Trubisky was electric for the #Bears in the third quarter today. Here’s his statline from that quarter:

His resurgence out of halftime played a big role in their win against the Jaguars.

Instead of building on what was working, it appears that Nagy tried to reincorporate some of the things that Trubisky struggled with, as it was apparent in the teams’ final two games. There were fewer designed bootlegs and more run-pass formations. Furthermore, it appeared that Nagy was reluctant in trusting Trubisky to throw down-field in both the Packers and Saints game, only allowing for deeper throws when they were needed.

I’ve said it before & I’ll say it again- Heading into 2021 you absolutely cannot have Matt Nagy has the head coach & Mitchell Trubisky as the starting quarterback. The two don’t work. Nagy doesn’t trust Trubisky & this offense doesn’t play to Trubisky’s strengths. #Bears

This offseason is vital as the 2021 season will be a do or die season for Nagy as the Bears’ head coach. With the possibility of a new starting quarterback and overhauled offense, it is up to the head coach to improve on where he has fallen short. Whether it is his play-designs or the development of quarterbacks, Chicago’s head coach needs to make several corrections. Nagy needs to own his mistakes and learn from them before the team begins training camp in late-July.