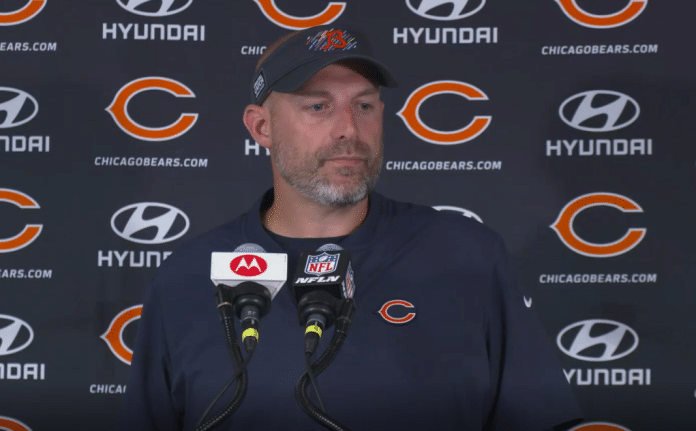 Matt Nagy has a problem. An identity crisis. Over the past calendar year, it has become apparent that the man suffers from an obsession. The desire to be the offensive play caller. This despite a mountain of evidence that he is not good at it. He resisted the idea of giving it up last season until the Chicago Bears had lost four consecutive games and the offense was in the toilet. Bill Lazor took over and breathed some life into the unit, saving the season.

Then for whatever reason, Nagy decided to take back play calling again this offseason. A move that puzzled so many people at the time. What exactly was he trying to prove? It felt like nothing short of a pure ego move. A message from him to the critics that he was never the problem on offense. It was the quarterbacks. Mitch Trubisky and Nick Foles. Then after three games his unit scored 33 total points and allowed Justin Fields to get sacked nine times in Cleveland.

It was a brutal smack of reality to his face.

Not only was the offense once again broken, but the team was losing games. Even worse, their prized young quarterback was battered way too often. Forced to operate a game plan that didn’t fit his strengths at all. So during the week, Nagy had a decision to make. Does he hand the call sheet back to Lazor? Despite dodging the question as much as possible, he finally admitted this was the case after the 24-14 victory over Detroit on Sunday.

Yet it was apparent from the way the man spoke that he wasn’t happy. Not only did he make it clear that every decision offensively still went through him, but he also stated unequivocally that he won’t be talking about play calling anymore moving forward. That has the look of somebody who feels bitter and cheated of his greatest joy. Another sign that his obsession with play calling is very real.

It’s almost as if the man feels he serves no purpose if he can’t call plays on offense. That is obviously ridiculous. The man runs the show every Sunday and is the leader in that locker room. If anything, not having to call plays might actually make him a better head coach. Yet it was apparent even as far back as last year that letting go of the call sheet was akin to giving up his only child to another parent. Something he struggled so much to accept.

“I’d be lying to every one of you guys if I told you that this is easy. It’s not. It’s not easy. It’s one of my favorite parts of coaching. I love calling plays. I love it.”

That is where the problem lay. Matt Nagy loves calling plays so much. He just isn’t good at it. His ability to recognize situations, handle personnel, and keep the unit operating in a rhythm is lacking. Yet everybody except the man himself seems to recognize this. He is blinded by his love of the job. Just give it more time. He knows it will work. The truth is it’s been over three years. It hasn’t worked.

If he wants to save his job, he needs to accept that.

This is not a hill he should die on. If nothing else, he made the right decision by going back to Lazor. Painful as it may have been, it’s what was best for the team. The needs of the many outweigh the needs of the few. Or the one.