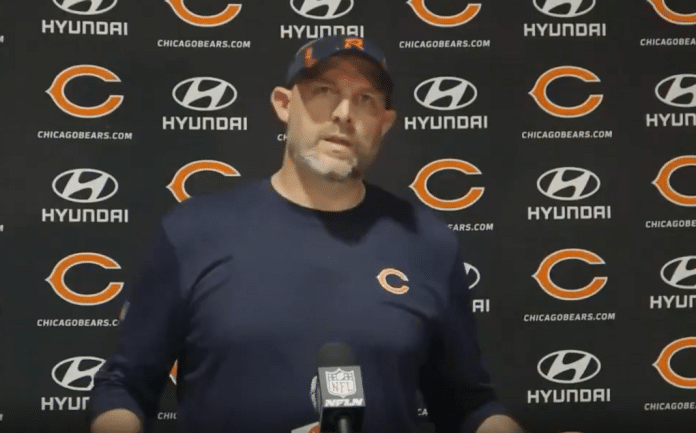 Matt Nagy has always channeled the power of positivity when it comes to surviving difficult stretches of a schedule. The problem is he’s having to do that a lot more often these days. The good times of 2018 are long gone. After two years of mediocrity characterized by long stretches of losing. Four-game streak in 2019. A six-game streak in 2020. All of it was characterized by the same thing. Consistently bad offense.

Somehow it felt like things hit a new low in Tampa Bay. Having 38 points hung on the defense wasn’t a huge surprise. Tom Brady is red hot right now and the Bears defense was missing multiple key pieces. The offense though was once again the story. Just three points against a Buccaneers defense missing all of their starting cornerbacks and one of their top linebackers. They ran for over 100 yards and yet still couldn’t anything going in the passing game.

It was a joke.

Justin Fields turned it over five times including three interceptions. Two of which weren’t his fault because one receiver fell down and another had the ball go off his hands. The offensive line couldn’t block anybody most of the day. This again speaks to an issue that runs deeper than anybody in that building wants to admit. It’s systemic. Something that has looked this way for years. The only common denominator in all of this is Nagy.

All the while he continues to try putting a positive spin on things. His latest gem might be his best. When trying to explain some of the good things that came out of the game, he leaned on the fact that the defense only gave up three points in the second half. After allowing 35 in the first. This reeks of the same insane optimism George McCaskey had about how Nagy managed to win three games last year after losing six in a row.

Matt Nagy is out of excuses to offer

For the longest time, he was able to hide behind the Bears’ historic issue at quarterback. He wasn’t the problem. It was Mitch Trubisky. The guy he didn’t have any involvement in picking. So the Bears sent the former #2 overall pick packing. Now he has the quarterback he wanted. The guy he handpicked going back months. Guess what? Nothing has changed. The offense is as bad as ever.

People have spent over three years blaming the talent. They’re done. Matt Nagy had more than long enough to get this problem fixed. Instead, it has gotten worse. They are on pace to score 245 points this season. That would be the lowest margin since 2004 when they managed just 231 with Craig Krenzel, Jonathan Quinn, and Chad Hutchinson under center. The fact that Nagy is approaching that milestone despite having more talent to work with says it all.

The Bears had the right idea when they hired him. A charismatic guy with leadership traits and a deep offensive background centered on quarterbacks. The problem is they chose the wrong guy. Sadly that seems to be a theme for this organization. Still, they have to keep trying or risk ruining yet another young quarterback.