Home Chicago Bears News Louis Riddick Had a Reaction For The Ages At This Bears Hot... 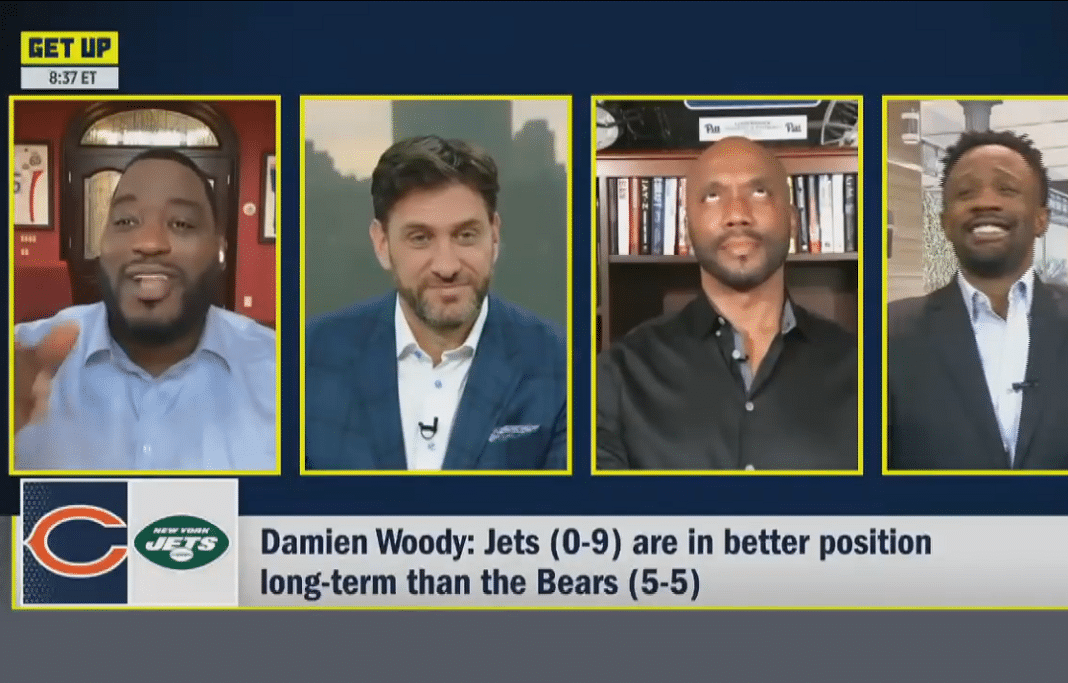 Louis Riddick has become a popular figure among Chicago Bears fans over the past year or two. Partly because he has strong relationships with the local media for his fair and honest assessment. Not to mention his obvious intelligence. The guy tells it like it is. That and his background as an NFL player and personnel executive is why he is becoming a hot name for possibly replacing Ryan Pace as Bears GM.

If people are looking for another reason to love Riddick, they need to catch what happened on ESPN Get Up. Damien Woody, a former Pro Bowl offensive lineman, picked Chicago for his latest breakdown segment. He went hard, calling them the “Kitty Cats of the Midway.” They’d lost the right to be called monsters because of how awful their offense is.

Yet the best part was what came next.

Woody isn’t afraid to spout hot takes when he’s on a roll and he had a doozy ready for this one. He stated that from a long-term perspective, he’d take the New York Jets over the Bears right now. The Jets of course are 0-9 and the worst team in the league by a pretty healthy margin. Yet because they have more cap space and are projected to hold the #1 pick, he believes they’re set up for the long-term much better.

This drew an incredible reaction from Riddick who looked like he couldn’t believe what he was hearing. Words can’t do it justice. Watch it for yourselves. It is pure entertainment. His argument against it also holds plenty of merits.

The fact is yes the Jets do have lots of picks and money at their disposal moving forward. Yet the reality is none of those things guarantee success. Remember this. Since 2015, New York has spent four picks in the top 6 of a draft. Four. That is supposed to guarantee long-term success right? Yet here they are the worst team in the NFL. They’ve also thrown a ton of money at free agents that haven’t worked out.

Meanwhile, the Bears have operated with considerably fewer resources under Ryan Pace and still managed to build a competitive team. The main problem is the offensive line fell apart and they haven’t gotten the quarterback position right. Louis Riddick stated the obvious fact. When the line was halfway decent in 2018? They went 12-4 and won the division.

The Jets haven’t won their division since 2002.

Having more resources doesn’t mean an organization is suddenly going to start using them better. Besides, it’s not like the Bears are completely devoid of young talent. Several of their best players are 26-years old or younger.

That is plenty to work with moving forward and it’s not like they have to gut their entire older core anyway. They may have to make one or two sacrifices but they can still keep this team together while rebuilding on the fly. It comes down to whether Pace is able to fix the offensive line and find at least a serviceable quarterback.