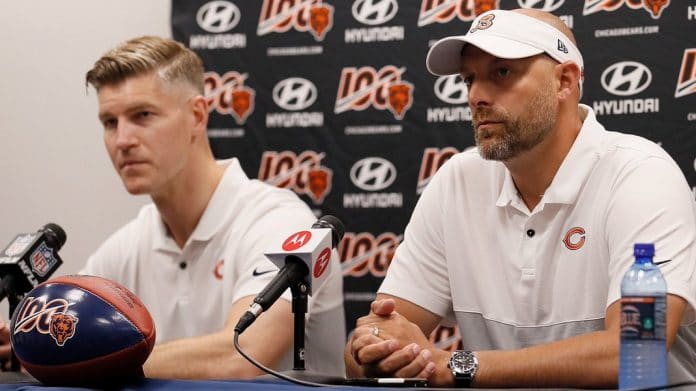 The Chicago Bears have 11 games left to play. The latest against Tom Brady and the Tampa Bay Buccaneers today down in Florida. As this plays out, one question continues to linger on the minds of fans. What exactly is the status of head coach Matt Nagy and GM Ryan Pace? That is difficult to tell. The team is neither good nor bad at this point, sitting at 3-3 and very much in the thick of the wild card playoff race.

Then there is Justin Fields. The rookie quarterback has lots of Bears fans excited about the future. He seems to have settled in as the starter more and more as the season has progressed. While the offense, in general, has struggled, there are some signs that he is starting to get it. Is this enough to preserve the jobs of the two men at the top? The simple answer according to Jeff Hughes of Da Bears Blog is it’s too early to tell. During his weekly pre-game Twitter thread, he laid out the supposed thought process at Halas Hall.

But ownership decided not to do that. Why?

You want to argue that trust was misguided? Fine.

But when the Bears were presented with the opportunity to land Justin Fields, Pace and Nagy needed ownership approval. They needed that trust. And it took McCaskey about 3 seconds to sign off.

So let’s watch progression of the QB over these next 11 games. (Again, all that matters in 2021.) If his trajectory continues upwards – and there’s no reason to think it won’t – you can expect Pace & Nagy back in 2022.

If the development hits a wall, nobody is safe.

I’m not making an argument to keep Nagy/Pace. I’m trying to explain thinking at Halas.

If:
• You decided to keep this GM & coach (they did)
• You love QB they drafted (they do)
• You’re pleased with QB’s progression AND team record (they are)

You’re not firing them.

Long story short? All of this hinges on Fields.

George McCaskey gave Pace the green light to move up and pick the young quarterback. He trusts Nagy enough as a head coach to develop him properly. If the rookie shows steady progress over the coming weeks? Then it’s a safe bet both men will be back in 2022. Likely with contract extensions. If the Bears happen to make the playoffs or at least post a winning record? That will only help matters.

If things go south down the stretch, then changes become far more likely. The simple translation is don’t expect a decision one way or the other during the season. The Bears haven’t been bad enough to warrant a midseason firing of any sort. Unless they embark on an epic string of blowouts, both men will at least finish out the season.

Matt Nagy and Ryan Pace must figure out the offense

To this point, everything they’ve tried hasn’t gotten the unit to produce anywhere close to the same level as the defense. Right now it is on course to have one of its worst seasons of the Super Bowl era. That is saying something given the ineptitude Bears fans have witnessed in just the 2000s alone. They’re 30th in points scored and 32nd in total yards. They can’t score or move the ball with any consistency.

It is difficult to win football games that way. Matt Nagy has tried multiple solutions. He gave up play calling to Bill Lazor for the second time. The coaches shifted to a more run-oriented attack that has done better than expected. As for Fields? His numbers aren’t anything flashy but there is evidence of improvement. After a 60.3 passer rating in his first two starts, it has jumped to 82.3 over the past two.

The film illustrates this as well.

He’s showing more confidence in everything he does. Navigating the pocket. Making adjustments at the line of scrimmage. Reading coverages. Throwing with conviction. Mistakes still happen. Par for the course with a rookie. Yet it feels like the kid is getting close to his first really good game. It may not happen in Tampa, but the belief is it’s coming. If it does, Nagy and Pace will no doubt feel better about their chances.