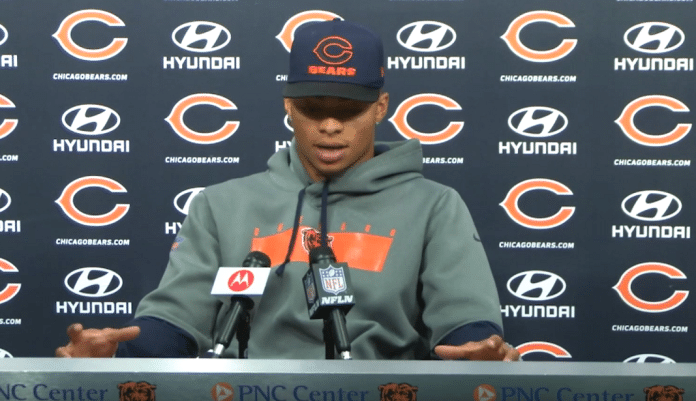 Everybody always says it. The NFL is a different animal from college. The talent pool is much smaller. Much more condensed. Playing the best in the sport every single week makes it difficult. That is why most rookie quarterbacks tend to struggle. For some, it’s the speed of the game. For others, it might be the complexity of the defenses. Their ability to mask coverages and unleash exotic blitzes. These are all things Justin Fields has gotten plenty of glimpses of since taking over as the starter for the Chicago Bears.

Unsurprisingly he has struggled at times. His game against the Cleveland Browns was a perfect example. A young quarterback looking completely overwhelmed by a difficult situation. To his credit, he survived the nine-sack onslaught and has shown steady improvement since then. The 11th overall pick was asked about his play to this point and how the offense has continued to struggle at consistently scoring points. Fields had a rather honest answer about both.

This makes plenty of sense.

Especially from Fields’ perspective. At Ohio State, he made his name as one of the best big-play artists in college football. Somebody who loves to deliver the kill shot down the field to open wide receivers. That mentality hasn’t left him since joining the Bears, but it seems he is beginning to realize NFL defenses aren’t nearly as generous as Big Ten defenses were.

He is learning the popular saying “take what the defense gives” has legitimate merit at this level. To his credit, Fields is getting better at this. He proved it against the Packers on Sunday. On the two Bears scoring drives, he was excellent at making throws on time and in rhythm. He never got greedy, always making good reads and decisions. When he got behind the sticks, he didn’t try to get it all back in one chunk. He instead got back into manageable down and distance before getting a conversion. That is how the pros do it.

Justin Fields is willing (and able) to learn and that matters

Quarterbacks coach John DeFilippo said the Bears rookie is probably the best he’s ever coached when it comes to accepting positive criticism. He doesn’t take things personally. The kid wants to be coached hard. A surefire sign that he is aiming for greatness in this league. That is why the signs of changes in his game are already showing up. You’re seeing Fields do a number of things he didn’t do a lot at Ohio State.

That is the sort of tangible improvement that gets you excited. Sure, the stats aren’t quite there yet. Justin Fields hasn’t thrown more than one touchdown in a game and topped 200 yards just once. Then again it’s hard to do either when you’re only throwing 20-25 times per game. One has to imagine the Bears will let him off the leash at some point in the near future.

It should be quite an experience.

What people should be expecting right now is improvement. It doesn’t have to be astronomical. Just steady, incremental progress. That is what they’ve gotten from Fields to this point. This statement from him illustrates that the NFL remains an adjustment for his expectation. Both for himself and the offense. Once he has a firm grasp on how to execute consistently? Things will get a lot more fun.