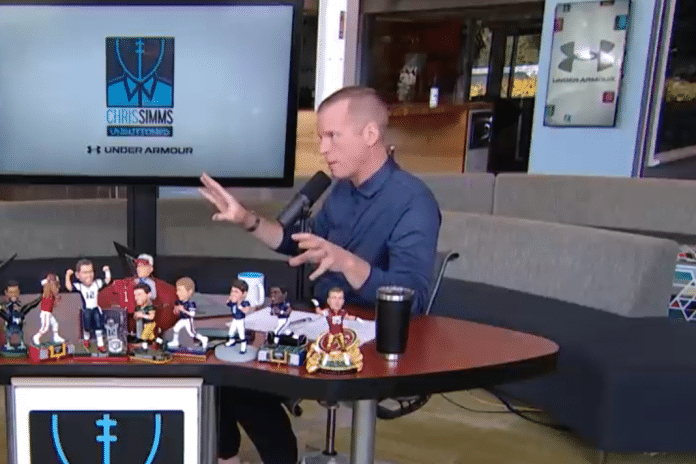 Justin Fields had plenty of supporters coming out of Ohio State in the NFL draft. People who were certain given enough time that he would become a good quarterback in the NFL. However, he also had his share of critics. Perhaps none more prominent than former quarterback Chris Simms. He turned a lot of heads leading up to the draft when he ranked Fields as the 5th-best option of the top six quarterbacks in the class. Even behind eventual 3rd round pick Kellen Mond.

He didn’t back down from that stance after the draft either. Simms ranked the top 40 quarterbacks in the NFL going into the 2021 season. He had Fields squarely at #39. His reasoning? That he suffered from bad mechanics. This led to issues with him failing to string together easier completions that pro quarterbacks must make.

QB39 – Justin Fields
Special running ability. Arm is top notch. Could be a top 20 QB halfway through the season. But his bad mechanics scare me a lot…led to bad incompletions on routine NFL throws.
I am rooting for him, hope he makes me eat my words this season.

It seems like Simms was validated when Fields became the starter. He was pretty much left for dead in Cleveland, going just 6-for-20 passing and getting sacked nine times. Nothing went right that day. Since then? Things have gotten progressively better. While the numbers haven’t been outstanding, the tape shows a young quarterback getting more and more comfortable. He is starting to play with some confidence. Enough to where Simms has taken notice, even admitting on his latest Unbuttoned podcast that he might’ve misjudged Fields’ capabilities.

Credit to the man for admitting he might be wrong. A lot of analysts would be unwilling to do so. Simms does his best to remain fair. It sounds like he is quite intrigued by the strides Fields has made in the past couple of months. He is not the same player he was coming out of Ohio State. He is growing into something more. The quick decisions, the execution, and the more polished mechanics. Everything is slotting into place.

Justin Fields seems like he is so close to a breakout

The numbers won’t show it, but his performances the past two weeks show a young QB who is starting to see things the way he should. His throws are coming with more confidence. He seems to be operating within the structure of the offense. The two scoring drives Chicago had against Green Bay showcased this. It feels like a matter of time before the Bears coaches finally decide to turn him loose.

Up to this point, they’ve stuck close to their new identity. A run-oriented offense powered by David Montgomery, Damien Williams, and Khalil Herbert. Justin Fields has yet to throw 30 or more passes in a game this season. That is likely to change in the near future. Teams will work to stop the run and dare him to beat them through the air. At his rate of progression, the rookie might surprise people with how well he plays.

Bears fans would love nothing better.

His first opportunity may come Sunday in Tampa Bay. The Buccaneers have the best run defense in the NFL and an injury-riddled secondary. It is a prime situation for the Bears to come out throwing. Whether the offensive line can hold up against that blitz-happy pass rush will likely determine how the rookie fares.