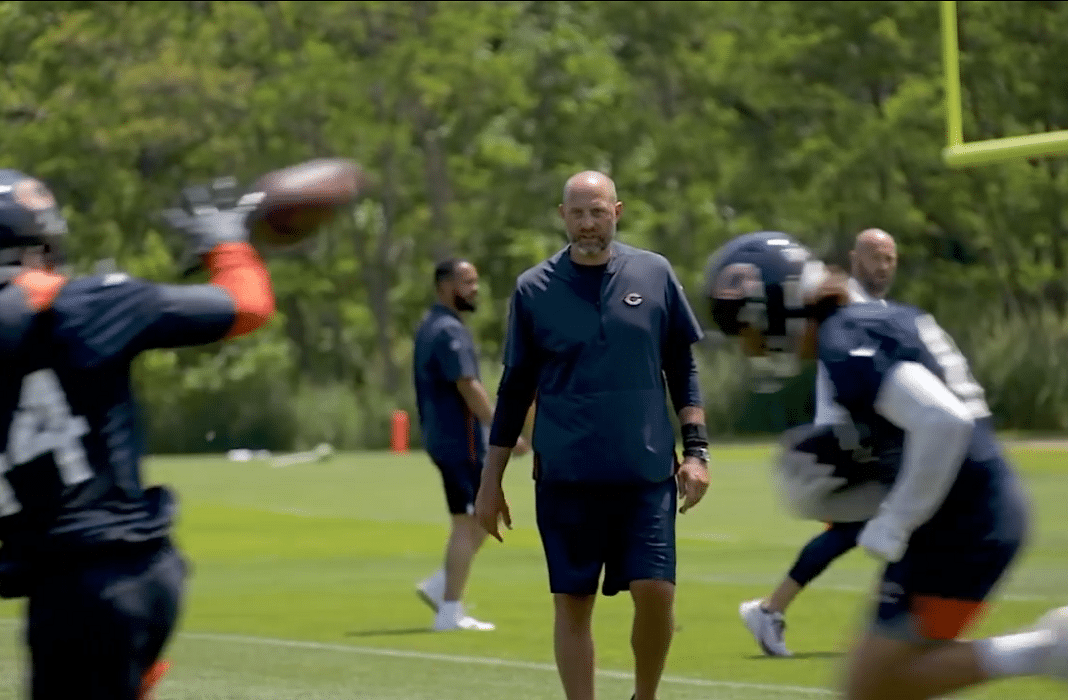 Matt Nagy has plenty of critics in the Chicago Bears fan community along with the media. People who accuse him of not having a full grasp on how to run a professional NFL offense. At the same time, he also has his fair share of supporters. Many of them actually play or have played in the NFL. Peyton Manning called him one of the best play designers in the NFL. Another person who voiced support for the 43-year old is Jay Cutler.

The former Bears quarterback is notorious for being critical of coaches. He feuded with offensive coordinators and wasn’t shy about criticizing guys like Lovie Smith and John Fox in the past. So for him to show support of Nagy was interesting, to say the least. Now it seems he had a chance to go into further detail on that subject.

This time on Red Line Radio.

Cutler was speaking on the situation with Justin Fields. How it will be a challenge as a rookie to grasp the complexity and speed of the NFL. That it may take time before he starts to see productivity. One benefit he’ll have is Nagy in his corner. Somebody who will know exactly how to handle him.

“I like Nagy. I think he’s going to do a really good job of protecting him. Put him in good positions. Third and long. Some of those tricky spots. Making sure to take some of the bad decisions out of his hands.”

The Barstool hosts were quick to point out Nagy’s well-documented faults. Namely his unwillingness to run the ball with any consistency. Cutler understood that but made it clear he still does so many good things.

Then for good measure, he offered a reminder that stubbornness might not be the main reason Nagy won’t run the ball. There is always the fact that opponents are stacking the box to a point where they’re giving him few options but to throw.

“You’re damned if you do and damned if you don’t on offense. Everything in the world is telling you to throw the ball. Every fan in the stadium is telling you to run the ball. So you run the ball and you get -2, -2, -1 and it’s 4th and 15. Your offense is getting booed off the field. You’re getting booed and they’re like, ‘Why are you running the ball?'”

Jay Cutler had the opposite problem at times

During his stint with Mike Martz for example in 2010 and 2011. Martz wanted to throw the ball everywhere too. Cutler wouldn’t have minded that except for the fact his offensive line didn’t protect well, their receivers weren’t that good, and they had Matt Forte at running back. Defenses were daring Chicago to run the ball. When Martz finally decided to, the team started to win football games.

This time is the Bears just didn’t have the quarterback to take advantage of those situations. If Jay Cutler were under center instead of Mitch Trubisky? It’s fair to wonder if the results would’ve been more favorable at times. It certainly sounds like he wishes Nagy would’ve been his coach back when he was still playing. Now with Andy Dalton and Fields in town, maybe the optimism should be higher.

He thinks the Bears have their guy at head coach. It was just a matter of getting the QB position fixed. Once defenses start to respect the passing game more, then the running game should see more action. Nagy is a guy who tries to do what the situations tell him. He’ll run the ball when the defenses offer that opportunity. Banging his head against the wall just to do it isn’t how he’s wired. That may frustrate some fans, but it is at least easy to understand.