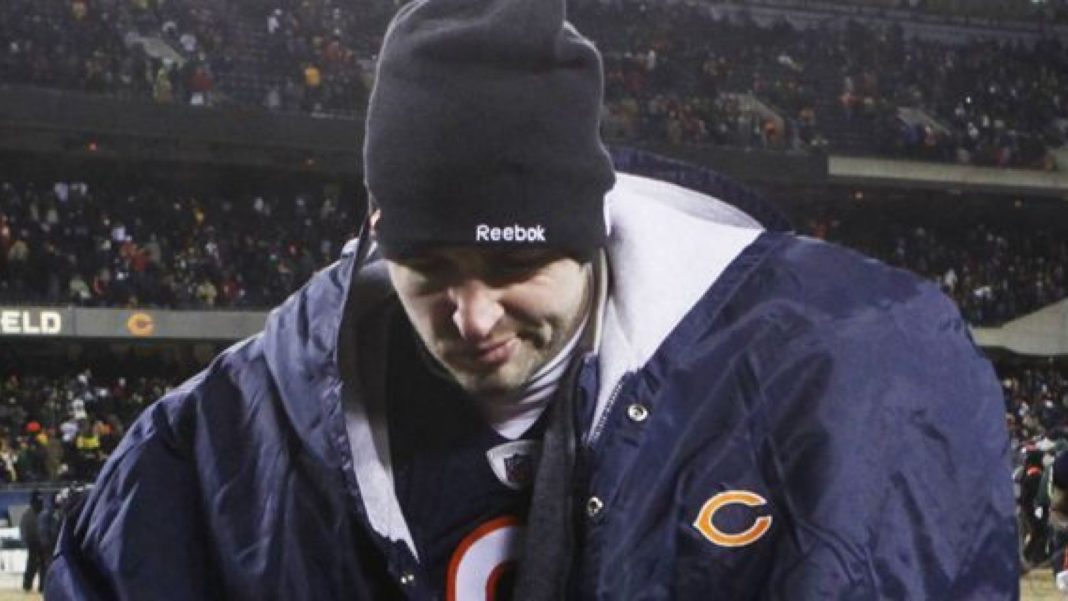 One of the defining moments for Jay Cutler as a professional football player came in January of 2011. He’d just led the Chicago Bears in a playoff victory over the Seattle Seahawks. A game where he accounted for four touchdowns. Arguably the best overall performance of his career. Now he’d have a chance to slay some demons in the NFC championship against the Green Bay Packers. Sadly, most people know the story.

At some point in the first half, Cutler suffered a slight tear to his MCL that took away the use of his knee. He was a sitting duck out there, unable to run or plant his leg to throw. So the decision was made to bench him in favor of backup Todd Collins in the second half. That soon became a switch to Caleb Hanie after a couple of series. Yet all people could talk about was Cutler sitting on the sideline, stonefaced watching the game.

This led to rampant social media rants from fans and players alike calling the quarterback out for not being tough enough. A stigma he would carry for the rest of his career. When asked about that during his appearance on the Pardon My Take podcast, Cutler admitted that it still bothers him to this day.

“I mean I’ve been through some crazy stuff. Concussions. Broken stuff. It just is what it is. So I think for me to have that part questioned? That hurt. That was tough. That was a tough one to swallow. To say I wasn’t good or anything else, I’m fine with that. There may be some truth to that. But to say I just didn’t want to play anymore?”

Jay Cutler describes the chaos of what happened

The truth is Cutler tried to gut it out. He wanted to play. However, it only took one pass attempt in the second half for him to realize that he was next to useless out there. So he made the tough decision to sit, putting his fate in the hands of somebody else. That obviously wasn’t easy. One thing he does admit made matters worse though was him staying on the sideline for the second half.

“It was right before halftime. We went in, taped it up, then I came out and I think I literally threw one ball and my knee just buckled. It went straight in the ground. Then I said like, ‘I don’t think I can throw and I don’t think I can run.’…And that’s where it gets tricky. Do I just stay on the sideline? I think now they take you in (to the locker room). You can’t just leave them sitting out there.”

It’s really unfair for Cutler to shoulder that much blame. He didn’t get a lot of help from his offensive line that day. It was just a case of bad luck made worse by a team that wasn’t prepared for how drastic an impact social media would have on the situation. Nobody should ever question his toughness. It wasn’t about pain in this situation. It was the functionality of a body part crucial to his position.