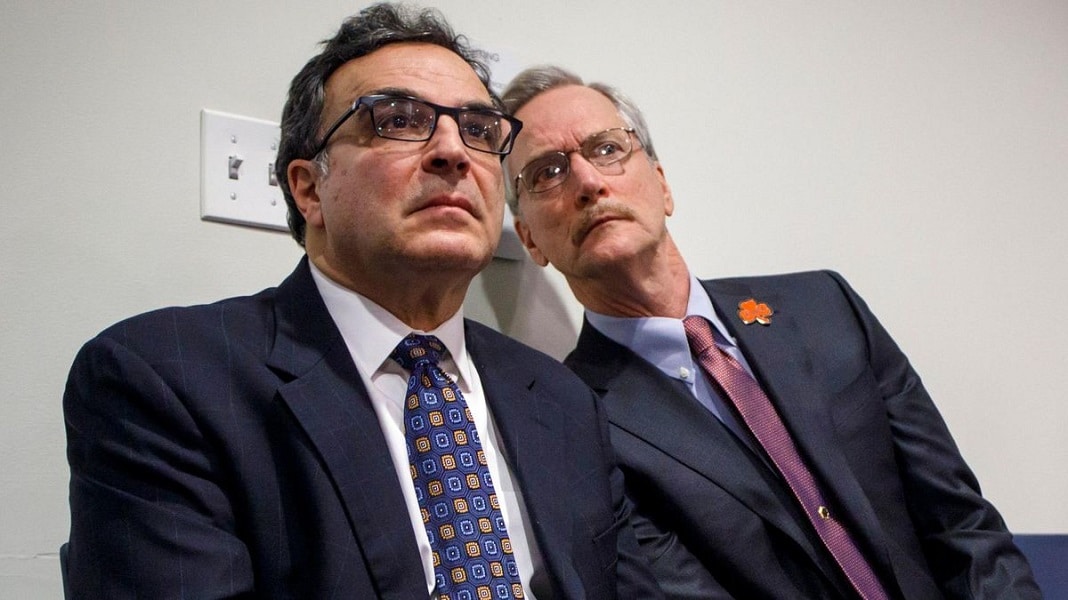 George McCaskey and Ted Phillips had to know what was coming. They had to know their decision to retain GM Ryan Pace and head coach Matt Nagy was going to be met with a ton of backlash. Yet it felt like the team chairman and team president were a little overwhelmed at times by the avalanche of hard-hitting questions they actually got from the Chicago Bears media.

That might explain why the entire session came across as an encapsulation of two men who know nothing about football living in their own little bubble. It started with the obvious question. After a disappointing 8-8 season that ended with a decisive loss in New Orleans, why did he feel it was warranted to bring Pace and Nagy back.

Some of the reasons he cited were predictable if rather weak.

George McCaskey's reasons why the Bears are still on track for a title:

That's really the best thing you can say: The Bears did a great job having a 6-game losing streak.

The Bears did seem to have a productive 2020 draft with tight end Cole Kmet, cornerback Jaylon Johnson, and wide receiver Darnell Mooney all becoming solid contributors as rookies. Yet it seems the primary selling point was how the head coach and GM managed to pull the team out of the six-game losing streak from October through early December. Not bothering to let it register the losing streak happened in the first place.

Being able to resurrect the offense, however briefly, and deliver three-straight wins to sneak into the playoffs was enough to convince them that both men still had a grip on the team. Phillips admitted he understands people think that shouldn’t be enough to save jobs, but argued that firing everybody isn’t how good organizations win. Continuity matters. McCaskey concurred.

George McCaskey re-iterates: "Retaining the continuity and sticking with these guys is the best route for the Bears at this time."

George McCaskey and Ted Phillips are clearly afraid of change

Everything points to a pair of men who fear making changes could make matters worse. Clearly, they’re haunted by what happened back in 2012. They fired Jerry Angelo in favor of Phil Emery who fired Lovie Smith after that season and hired Marc Trestman. Everybody knows what happened after that. McCaskey and Phillips don’t trust themselves to get things fixed if they do make changes. That would explain why the two were so complimentary of Pace despite his uneven track record.

Actual answer from George McCaskey. "Whether six years is the right amount of time for a general manager to grow into his position, I think it depends on the situation."

Where it gets really interesting is what George McCaskey said regarding this decision. He seemed to infer that some people weren’t behind it. That he actually made the choice despite opposition from inside the Bears organization. Maybe he just meant the fans but the comment was interesting. For what it’s worth, a source did inform SM a couple of weeks ago that some at Halas Hall were indeed urging McCaskey to move on.

Interesting comment by #Bears owner George McCaskey: I don’t think people have confidence in this course of action … it’s not a popular decision, we are aware of that and we are prepared for that

Either way, it’s clear the two men are digging their heels in.

#Bears CEO Ted Phillips when pressed on the length of contracts for GM Ryan Pace & Matt Nagy: "It's not really pertinent to what we're talking about."

George McCaskey and Ted Phillips are prepared to double down on Pace and Nagy. Why? The buzz word constantly used was “collaboration.” They like how the two seem to work together. That being said, it’s apparent what the likely plan is. Find a quarterback. While Pace was non-committal on if Mitch Trubisky would be back, it’s obvious the team views the QB position as the overwhelming focus of this offseason. Even better? It sounds like there won’t be any restrictions.

"Ownership has given us an opportunity and all the resources we could ask for". – Ryan Pace in regards to getting things fixed this off-season… #Bears

In other words, two guys who are on the hot seat have free reign to mortgage more of the future in pursuit of a position that neither of them has shown an ability to identify properly. Pace signed Mike Glennon, drafted Mitch Trubisky, and “collaborated” with Nagy in trading for Nick Foles. It’s really hard to feel any of the blind optimism the two men at the top seem to have.