The Chicago Bears begin their preseason this week against the Miami Dolphins. It is here where the true evaluations of the roster will commence. That is why head coach Matt Nagy and his staff released the first depth chart of the year. Now everybody will be quick to say the lineup is unofficial. That is true. The odds are good there will be some significant changes over the next three weeks.

That being said, the depth chart isn’t short on intrigue. It at least offers some glimpses into how the Bears currently view their roster both in terms of the starting lineup and also the competition for every backup spot. Rest assured there are quite a few nuggets worth talking about. Ones that could have a profound impact on the season if they end up coming to fruition a month from now. 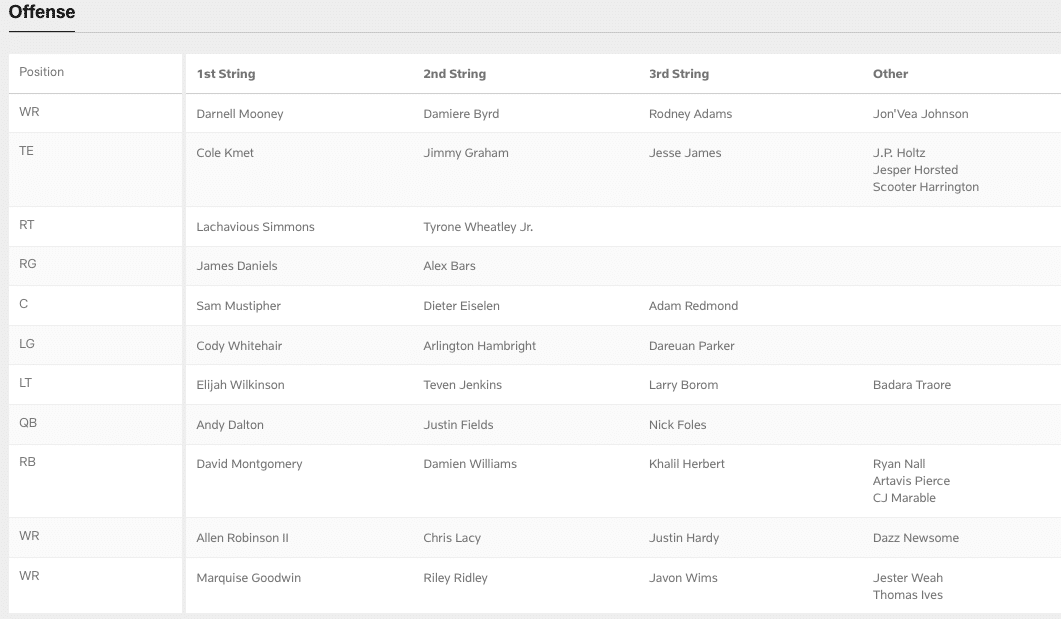 First is the wide receiver situation. As expected, Allen Robinson and Darnell Mooney are listed in the 1st string with Marquise Goodwin and Damiere Byrd right there with them. Where it gets interesting is that Chris Lacy and Riley Ridley are also 2nd stringers. Not Javon Wims. Probably not a great sign for the former 7th round pick.

The offensive line is predictably a mess. Elijah Wilkinson is back from his COVID-19 list stint, so he’s listed as the #1 left tackle because Teven Jenkins and Larry Borom are both hurt. On the right side, Germain Ifedi is on the PUP list. So it falls to former 7th round pick Lachavious Simmons to man that spot. The depth is going to get tested a lot this week.

Last but not least? Jesse James is already slotted into the #3 tight end spot despite having signed barely over a week ago. His performance in camp to this point justifies that though. He’s easily stood out as the best receiving option at the position not named Graham or Kmet. 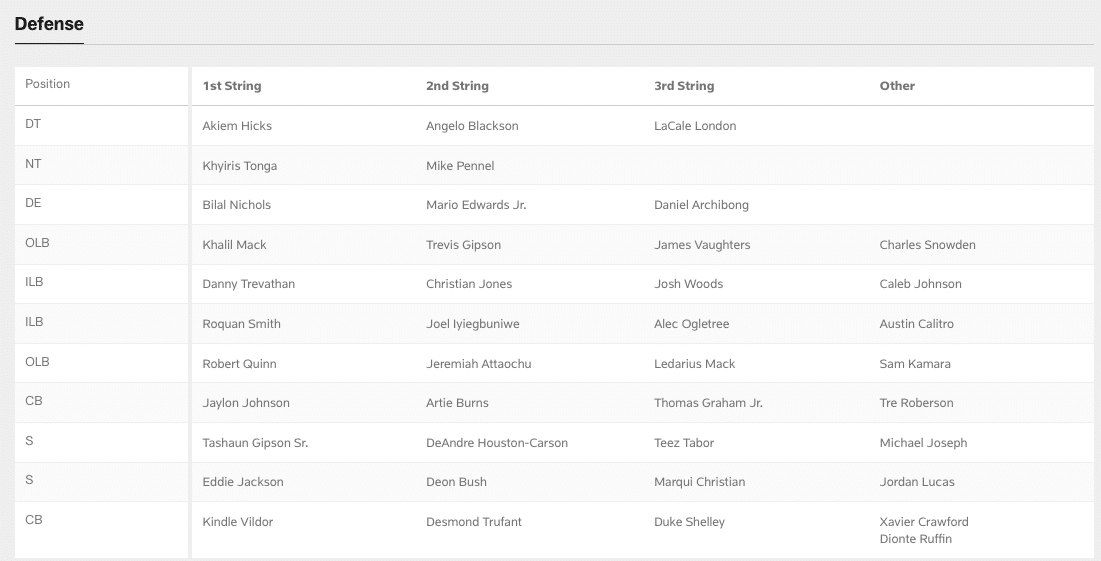 Not a lot of surprises on the defensive line. Khyiris Tonga is filling in as the starting nose tackle with Eddie Goldman out. Outside linebacker is the same although it is somewhat interesting that Ledarius Mack is listed ahead of the Bears’ prized undrafted free agent acquisition Charles Snowden. Definitely something to monitor.

Inside linebacker shifted really fast. Josh Woods suddenly finds his job in jeopardy with Alec Ogletree surging. One can safely assume Joel Iyiebuniwe is starting to sweat too. Right now only Smith, Trevathan, and Jones can be considered locks for the final roster.

Cornerback has become ground zero for the real intrigue though. It looks like Kindle Vildor, their 5th round pick from last season is ahead of Desmond Trufant in the race for the second outside corner spot opposite Jaylon Johnson. As for the nickel corner spot? That remains unclear though the two primary competitors, Duke Shelley and Thomas Graham Jr., seem to be on equal footing.

It will be interesting to see how all of this changes in the next couple of weeks.