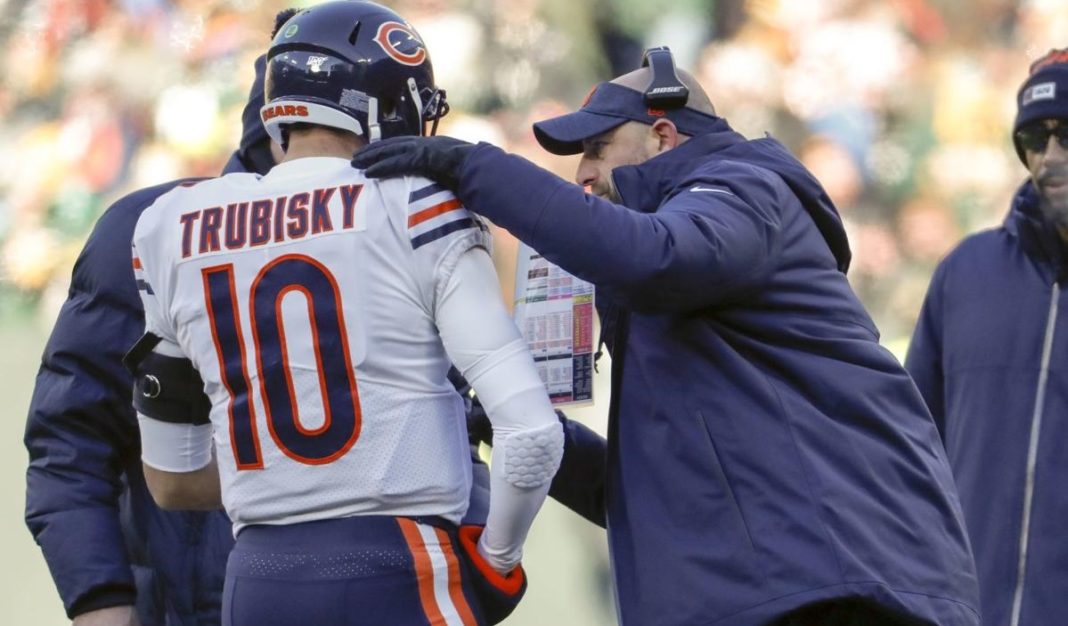 Matt Nagy is on the hot seat. This is well-established by now. A lot of Chicago Bears fans were upset that George McCaskey decided to retain him and GM Ryan Pace for 2021. The feeling is the head coach has had some success the past three years. Sure the Bears haven’t gotten as far as they’d prefer, but Nagy is responsible in a lot of ways for them being a respectable team.

That isn’t good enough for some people. Their biggest bone of contention centers around the offense. Nagy was brought in to do two things. One was to win, and the other was fix the offense. He did some of the former but not enough. He hasn’t done any of the latter. The Bears offense has yet to finish in the top 20 of the NFL during his tenure.

Blame for that falls on him. Or that’s the narrative anyway.

One person who is tired of hearing such slander is Ross Tucker. The former offensive lineman and national NFL analyst believes Nagy gets a lot of undeserved criticism. This despite proven success the past three years with two playoff trips. All despite bottom-of-the-league quarterback play. Something he explained on 670 The Score with Mully & Haught.

“I think everyone is in agreement that Ryan Pace and Matt Nagy are on the hot seat although I got to tell you guys…You know Matt Nagy’s 28-20 with bottom 10 for sure and probably bottom five quarterback play during that time. Honestly, their roster has been middling at best I would say.”

Tucker thinks Nagy isn’t the primary issue with the Bears. It’s their absence of a quarterback and also their overrated roster that he thinks Pace did a poor job building. Rather than just dump Nagy, people should wait until he has an actual quarterback.

When David Haugh tried to offer the excuse that Nagy didn’t do a good job developing Mitch Trubisky, Tucker shrugged it off with a simple reply.

“Well, but David maybe on some level Trubisky’s not developable.”

This is the crux of the issue. Nobody can say for sure Nagy failed Trubisky. Yes, the kid is a former #2 overall pick, but so was Marcus Mariota. So was Robert Griffin III and so was Ryan Leaf. Being drafted that high doesn’t guarantee you’re going to be a good quarterback. Trubisky has talent but it takes more than physical skill to thrive at that position.

Maybe Matt Nagy squeezed all he possibly could out of the guy. Two playoff trips. A Pro Bowl alternate nod in 2018. It wasn’t what the Bears hoped for but it’s quite possible that is the best anybody will ever see. Rather than say Nagy failed him, Tucker is arguing that the head coach got the most out of the guy that he could. There is only one way to know for sure. Trubisky has to go somewhere else and Chicago has to find the head coach a new quarterback.

If the offense falters again and Trubisky thrives elsewhere? There’s our answer.

Tucker isn’t convinced that will be the case. If the Bears manage to upgrade the quarterback spot even slightly this offseason, he believes fans will start to see the real Matt Nagy emerged. Not just the good leader but the smart offensive coach as well. Maybe then Chicago will learn to appreciate him a little more.

Trust one thing. Bets are already being placed on whether Nagy will lose his job by the end of next season. Think you know the outcome and can win a little money on it? Use PointsBet. They’ve partnered with the Chicago Bears and the promo code Mockery lands you two risk-free bets up to $2000.