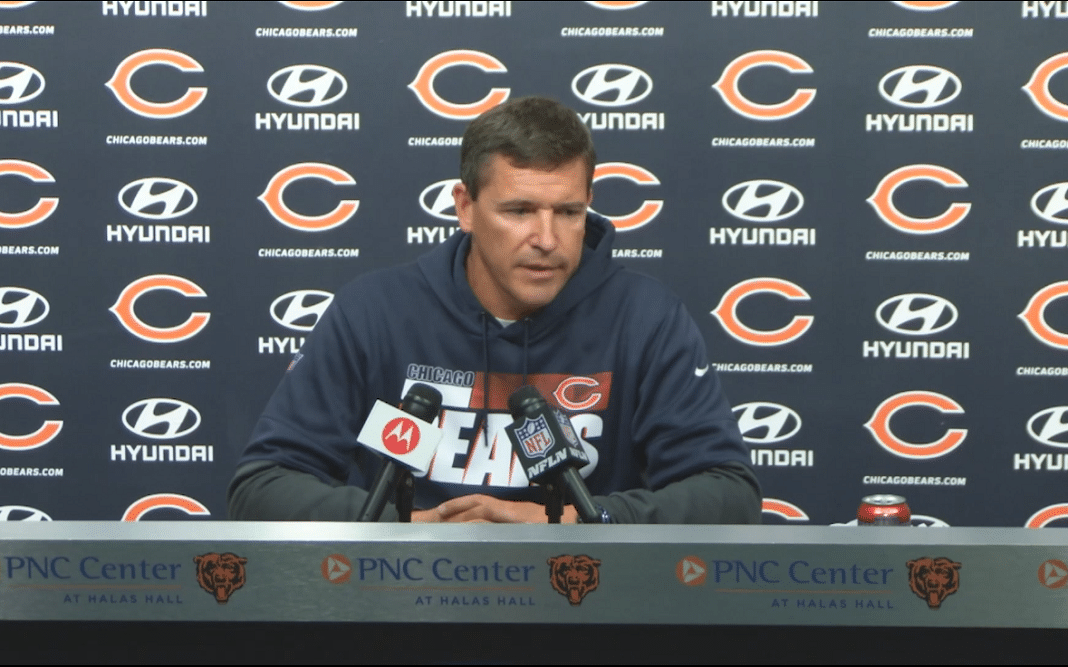 Matt Nagy is looking more and more like a man on an island when it comes to his decisions regarding the quarterback position. He’s said for months that he is trying to do what is best for the Chicago Bears by starting Andy Dalton over Justin Fields. The idea is to give the rookie as much time as possible to acclimate to the NFL. Fans and most of the media aren’t buying it. They think Fields is ready now. His two years at Ohio State and strong preseason was proof enough of that. As it turns out, Nagy’s own offensive coordinator Bill Lazor may sit in that camp as well.

He spoke to the media on Wednesday and had high praise of Fields’ brief appearances during the game on Sunday night, stating the rookie looked “like he belonged.” Nothing too major. However, that changed later in the presser when he was asked this question. Does he think Fields is ready to run a full offensive series? His answer to that and the follow-up question were as eye-opening as it gets.

It isn’t hard reading between the lines there.

Lazor made it as clear as possible without saying it outright. If it were his decision? Justin Fields would be starting. He saw enough in the preseason to show him the rookie has what it takes to handle the pressure. The decision to keep him out is Nagy’s and Nagy’s alone. The way he cut the line of questioning off told how uncomfortable he was going any further. Lazor didn’t want to fuel any controversy.

It might be too late for that. Nagy was already under a ton of scrutiny from the outside for his offensive decisions. After what happened in Los Angeles, that has only intensified. Marquise Goodwin had questions about his game plan which failed to engineer any downfield shots. Now his own offensive coordinator fueled even more doubts about everybody supporting the decision to keep Fields benched.

Bill Lazor is no doubt sensing the danger at hand

One must not forget he’s been part of a number of coaching staffs that were fired due to not winning enough games. He probably has a good sense of the danger this Bears group is in right now. No winning record since 2018. No playoff wins. Starting out the season 0-1 with another underwhelming offensive effort. It feels like Nagy is operating with too much idealism and not enough common sense.

He keeps talking about the future being what is most important with Fields. Has he stopped to wonder if he’ll have any part in that future if this team doesn’t start scoring more points? George McCaskey said he wanted to see progress going into 2021. If the Bears play like they did Sunday night the rest of this season, they aren’t winning a lot of games. That means Fields might be Nagy’s one lifeline to saving his jobs. Not to mention Bill Lazor and the rest of the coaching staff.

Nagy doesn’t have the luxury of time or near the credibility that Andy Reid did. There is nothing to indicate he is the best man for the job when it comes to developing Fields. Until there is evidence to alter such thinking. The only way that happens is if the kid plays. There is still time, but Lazor knows it can run out fast.