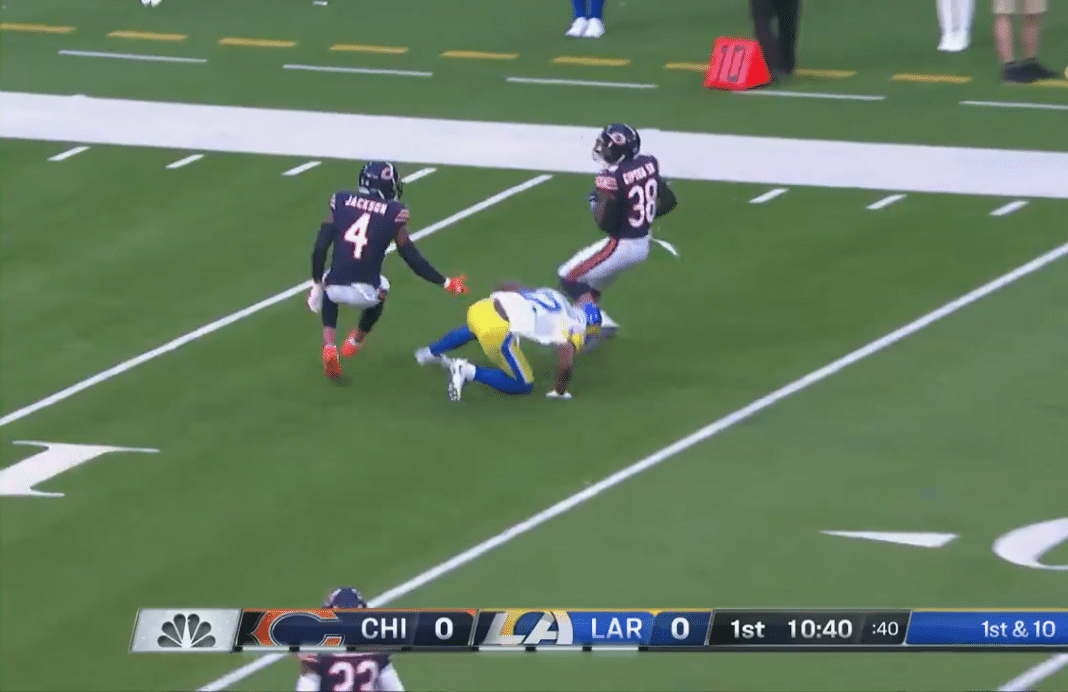 Everybody knew the Chicago Bears secondary was going to be a problem this season. They lost two starters in free agency, most notably Kyle Fuller, and didn’t do anything significant to replace them. Instead, they decided to gamble on youngsters like Kindle Vildor to pick up the slack. No doubt they were hoping others would step up to fill the void. Somebody like Eddie Jackson, a former All-Pro who had a rough 2020. It was hoped the elevation of Sean Desai to defensive coordinator might help him regain his old form.

If opening night in Los Angeles is any indication? People shouldn’t be holding their breath. The entire Bears secondary was sliced and diced by Matthew Stafford and the Rams. Yet it was the safeties who really stood out for all the wrong reasons. Jackson was at the center of it. Not only was he part of two massive coverage breakdowns that led to two scores over 50 yards, but he didn’t even have the presence of mind to touch the guy down on one of them.

This isn’t even accounting for his ongoing issues with tackling.

Jackson continues to insist he’s a good player and he will rebound. This despite growing evidence that whatever player he was three years ago is long gone. People likely think he was more a product of Vic Fangio at this point. His streak of games without an interception continues to grow. His tackling was never good and he offers the Bears little as a blitzer.

One must not forget what makes all of this so much worse. Jackson in the fifth-highest paid safety in the NFL. He’s making $14.6 million per year. The Bears are paying him to play like a superstar and he instead looks like somebody who should be a backup. This is the sort of fall from grace that hasn’t been seen on that side of the ball for Chicago in a long time.

Eddie Jackson might be playing for his job at this rate

That may sound a bit excessive but is it? Jackson turns 28-years old in December. It feels like a youth movement is coming for this Bears defense. While he isn’t exactly over the hill, it’s a safe assumption the team might start looking to shed as much salary as possible. Using the post-June 1st designation, the Bears would secure $6.1 million in cap space by releasing the safety. They’d get over $11 million if they found a way to trade him after that deadline.

Eddie Jackson was a good player. He isn’t anymore. Maybe that will change over the course of this season. He has time and the Bears defense won’t play great offenses like Los Angeles every week. That said, it feels like his seat is heating up like never before. He got one bad season because the credibility was still there. With each dud he delivers in 2021, the ticking clock gets louder.

This team is paying him way too much for this kind of return.

Patience with fans is already nearing the boiling point. It won’t be long before coaches and front office people start feeling the same way. This isn’t even accounting for the possibility that a lot those people who helped make him a start might be gone after this season.