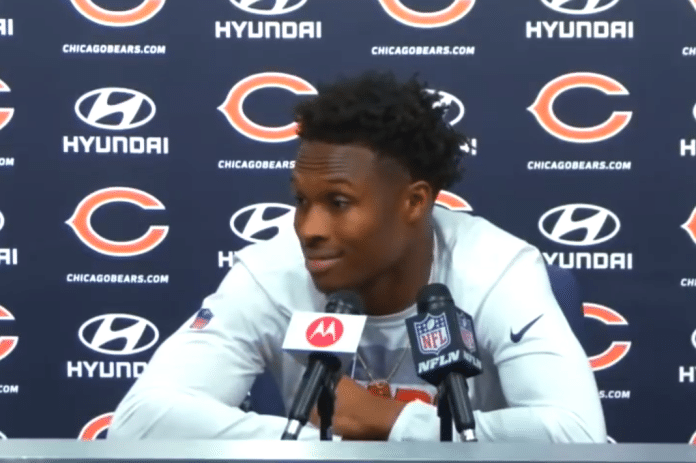 To quote Michael Jordan? There’s a new sheriff in town. Okay, that’s a little dramatic but the truth is hard to deny. The top dog in the Chicago Bears passing game is not Allen Robinson. That crown now belongs to Darnell Mooney. He leads the team with 261 yards. A big reason for this sudden surge is his surprisingly strong connection with Justin Fields. Since the rookie took over in Week 2, they’ve connected 11 times for 201 yards.

Their bond is impossible to deny. The trust and feel they already have for each is evident. It was similar to what Robinson had with Mitch Trubisky the past few years. So how did it come along so fast? How did Mooney find a way to circumvent one of the better receivers in the game to become Fields’ go-to target? This isn’t just something that magically developed in practice. It goes much further. Away from the field and the locker room. This is something the receiver has cultivated for months.

This is further proof that the NFL is about relationships.

Especially regarding quarterbacks and wide receivers. Practicing with Fields was never going to be enough. If Mooney wanted to get their connection to where he wanted it to be, he needed to spend as much time as possible with the rookie. That included bowling, video games, training, and other activities. As time went on, he began to gain an understanding of who Fields is as a person and how he thinks as a quarterback.

Can’t say it didn’t work. Their chemistry has been obvious for the past two weeks. Never more so than against the Raiders during the pivotal play of the game. Chicago faced 3rd and 12 from their own 27. Rather than opt for a check down, Fields trusted Mooney to find a crease in the Vegas coverage. Protection held up long enough and the QB found the receiver for a critical first down.

Darnell Mooney is a smart man for this approach

It’s another sign that the young receiver isn’t dumb. He understands that in order to be great in the NFL, it isn’t just about talent. He has that. What he needs are two other things. A vast library of route running moves and a strong connection with his quarterback. That last one can’t be understated. Just look at Davante Adams and Aaron Rodgers. The receiver was about ready to rebel in the Green Bay Packers locker room when it seemed like Rodgers might not show up this season. Their chemistry and relationship are obvious.

That is where Darnell Mooney is hoping to get. He and Fields are off to a great start. They compliment each other so well. Fields with the big arm and love of throwing deep. Mooney with the blistering speed and ability to get open down the field. Everybody knew that was a connection that could take off. The young receiver wasn’t going to let the opportunity slip away.

Don’t fret about A-Rob though.

He seems to be coming around as well. Fields has done a better job finding him the past two weeks. That should only improve as their timing syncs up in practice. Whether they go the extra mile and hang out together off the field? That remains unknown.