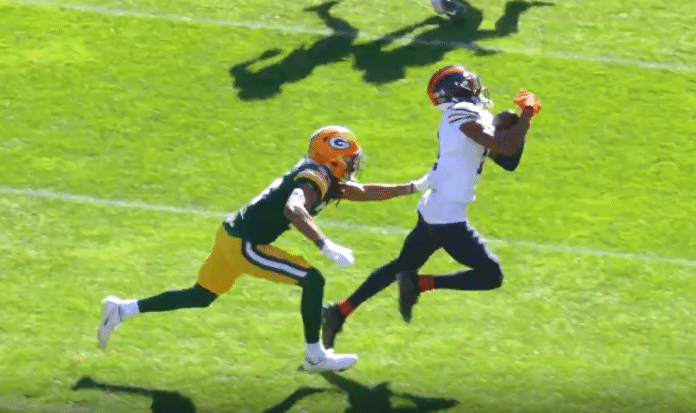 Everybody expected the obvious. Once Justin Fields became the starting quarterback, he’d establish a connection with Allen Robinson as the #1 receiver. That has not been the case. To the surprise of many, it is instead Darnell Mooney who seems to be the favorite target of the rookie quarterback. They’ve connected 16 times so far this season including Mooney’s first touchdown of the season against the Green Bay Packers.

That wasn’t their best connection of the day though. It came earlier in the 1st quarter during the Chicago Bears‘ opening drive. After a botched snap made it 2nd and 14, Fields found Mooney for 11 yards on a pretty out route to the sideline to make it 3rd and 3. That play provided the team with the momentum they needed to score a couple of plays later.

On the surface, it was just a nice connection in tight coverage. As it turns out? There was more to it than it seems. Mooney revealed as much since he was mic’d up for the game. Apparently, the receiver couldn’t see the ball in the air. Yes, really. Mooney just knew based on the route and timing that the pass should be there. So he stuck out his hands and the ball hit him right in stride.

That speaks to how in sync the two players actually are.

Mooney trusted Fields enough to put the ball where it needed to be and the young quarterback did exactly that. This is typically something only the best QB-wide receiver combinations pull off. Michael Irvin talked about something similar during his time with Troy Aikman. They were so locked in together that he confidently stated he could run 10 routes blindfolded and the ball would hit him in the hands seven times. It sounds like Mooney and Fields are already getting a taste of that.

Darnell Mooney is emerging as the Bears’ best receiver

That was not something anybody predicted when the season began. Sure the expectations were the second-year player was due for a big jump in production. Yet for him to clearly outperform Robinson six games into the season? That was not on anybody’s bingo card. The timing is certainly good for the Bears though. Remember that Robinson is a free agent in 2022. Mooney is the only notable receiver on the depth chart who won’t be.

So for him to emerge as Fields’ favorite target is certainly fortuitous. It means the team has something to build around moving forward if Robinson does indeed leave. Will he? There are no signs to indicate anything has changed regarding his contract. Maybe his stance will change if his intrigue with Fields is piqued. Then again he might not be okay with the idea of being the #2 guy in the eyes of his quarterback.

In such a case, the Bears will have work to do.

Not a ton of spending money and no 1st round pick next year. They may have to get creative. Still, it’s great to see somebody like Darnell Mooney succeed. A kid who got little attention at Tulane, became a 5th round pick, worked his way into the starting lineup and is now flourishing under difficult circumstances.