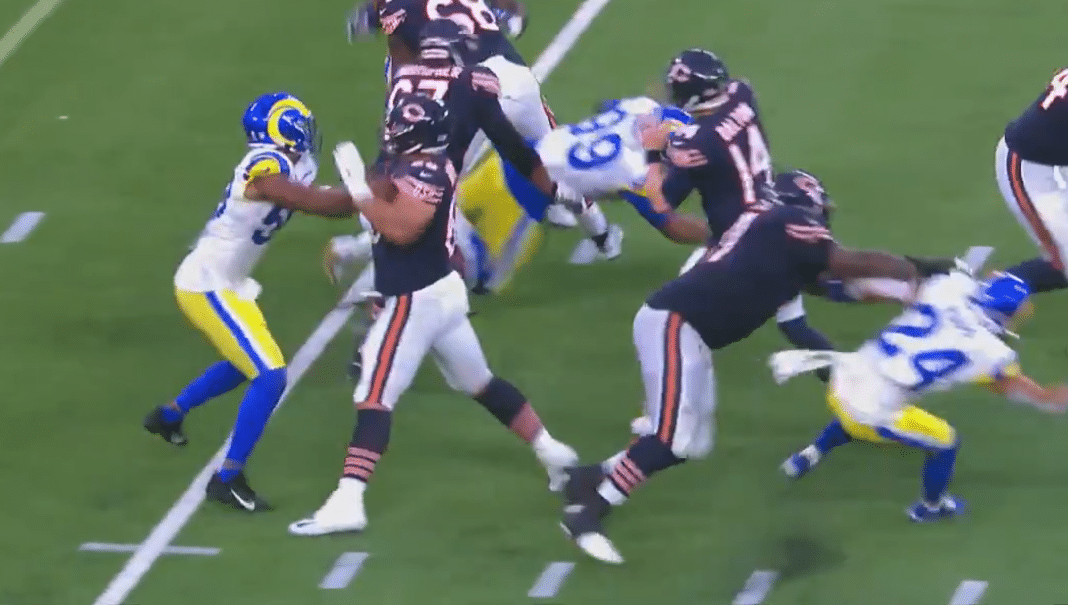 The Chicago Bears offense had a mixed bag of a night in Los Angeles last weekend. They only scored 14 points and committed two costly turnovers. At the same time, they ran the ball really well and had just one penalty. The offensive line was at the heart of this unexpected success, paving the way for David Montgomery’s big night and doing everything possible to hold off Aaron Donald. Unfortunately, not everything was so encouraging in that area.

The line saw not one but two of their left tackles leave the game with injuries and not return. Jason Peters came up ailing with a quad strain while Larry Borom suffered an ankle injury. This forced predominant right tackle Elijah Wilkinson to shift over to the left side. Going into this week, it wasn’t certain if Peters or Borom would be able to go against Cincinnati. Thankfully it appears some good news is coming on that front. Matt Nagy provided a recent update.

Matt Nagy said LT Jason Peters (quad) and NT Eddie Goldman (knee) have an "arrow up" after being limited in practice yesterday.

Peters was limited in Wednesday’s practice at Halas Hall. A sign the quad issue might not be as serious as feared. Nagy’s comments offer further hopes he might be able to play. There is no question the Bears absolutely need this upcoming game. They’re already 0-1 and falling to the Bengals means they’d face the Browns, Raiders, Packers, and Buccaneers in four of the next five weeks. That is how a season can spiral out of control fast.

Peters was a big help for the Bears’ ground attack in the opener against L.A. Aside from one misstep that caused a sack, he was solid in pass protection as well. The 39-year old looked surprisingly quick for his age. It remains a question of whether his body can hold up for a full season. Something that has only happened once since 2017.

Chicago Bears face a tough test in the Bengals

They are coming off a big overtime win over the Minnesota Vikings. They have a young and talented offense headlined by QB Joe Burrow while the defense appears rebuilt after years of ineptitude. Their defensive front held Dalvin Cook to just 61 yards rushing and sacked Kirk Cousins three times. This is not the same team that ended 2020 with such a thud. They appear improved.

The Chicago Bears aren’t in a position to consider this an easy win. That is why they need their offensive line to come ready to play. Their pass protection was an issue against the Rams and not having Peters would make it even worse. Having all five starters together for the second straight game can only help.

Can they get Montgomery going again?

If not, the burden will fall to Andy Dalton to create some points against his former team. Something plenty of fans don’t think he is capable of. Not with Nagy calling plays and the shadow of Justin Fields looming over everything. More than anything, this Bears offense just needs a big game. Something to restore their confidence and get them some momentum.