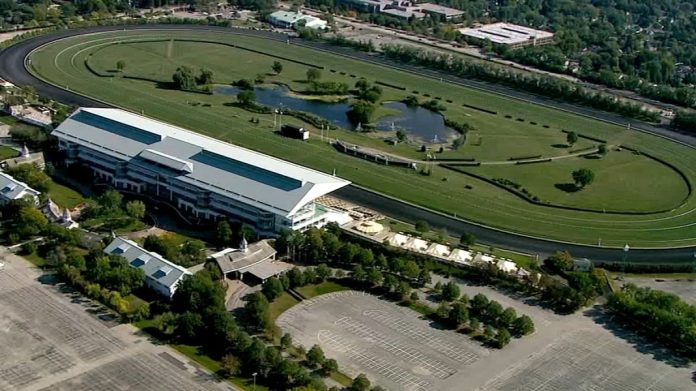 The Chicago Bears haven’t been saying much in regards to their plans for the 326-acre property of Arlington Racecourse International. It was quite a bombshell when the organization placed a bid to purchase it a few months ago. Now it appears only a matter of time before the sale goes through. A move that will cost the franchise $197 million. Nobody spends that kind of money without having big plans.

Danny Ecker of Crain’s Chicago Business had a chance to speak with Bill Carstanjen. He is the CEO of Churchill Downs, the current owner of the property. They too haven’t spoken about the situation much. That changed during a third-quarter earnings call. From what he understands, there is plenty of clarity on what the Bears will do once they own the land. They not only plan to build a new stadium there but aim to make it the envy of other teams.

The owner of Arlington Park said today that he expects the Chicago Bears will redevelop the northwest suburban racetrack with a “world-class stadium,” the first time a company official has commented publicly on the team’s highly anticipated plans for the site.

Speaking to analysts during the company’s third-quarter earnings call, Churchill Downs CEO Bill Carstanjen said the company is “sad” to be closing Arlington Park and “would have loved to continue to (have) racing” there, but said the Bears “will ultimately develop this prime real estate into a world-class stadium and development with numerous amenities for fans and residents to enjoy over the coming decades.”

Carstanjen reiterated that the company expects the sale of the property to close in late 2022 or early 2023, “subject to completion of due diligence and other customary closing conditions.”

This is further confirmation of what everybody thought.

The Bears have a plan, and that plan involves finally getting out of Soldier Field. Rumors have circulated going back many years the franchise has wanted out of that stadium. Mostly because they have no control over its operation. The Chicago Park District does. That is why every time they wish to make adjustments to the building, possible upgrades to increase revenue? They’re met with resistance.

A breaking point finally arrived when the CPD received communication from team president Ted Phillips about the possibility of opening a sportsbook at the stadium. No doubt an attempt to take advantage of the legalized sports gambling situation in Illinois. When the CPD dragged their feet in offering any sort of reply? The Bears had finally had enough. Two weeks later they put their bid in to purchase Arlington Park.

New Chicago Bears stadium will come down to cost

Money is always the bottom line. How much are they willing to spend? The McCaskey family has carried a reputation for being cheap in the past. Now that the organization is worth $4 billion, they have the cash to spend if they wish. It is difficult to say what their new stadium will cost because it isn’t clear what they’re going for. SoFi Stadium in Los Angeles required a cool $5 billion to build but that was meant to house two teams.

It is more likely the Chicago Bears shoot for something similar to what the Las Vegas Raiders did with Allegiant Stadium or the Dallas Cowboys with AT&T Stadium. That will likely cost the Bears somewhere around $2 billion depending on if they decide to keep it open-air, want a dome, or a retractable roof. The tricky part is finding the funds. There is no way the state of Illinois will offer public money to help. So they’ll need to find private investors.

That shouldn’t be too difficult.

The next step is closing the deal and beginning designs on what the stadium and surrounding property will look like. Once that happens and construction can begin? The Bears will likely start the process of getting out of their Soldier Fields lease. It runs through 2030, so an early exit will cost them tens of millions of dollars.