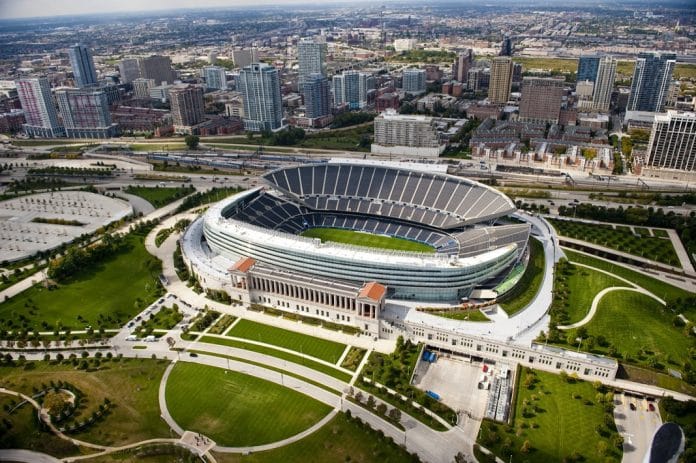 Tensions between the Chicago Bears and the Chicago Park District, owners of Soldier Field, have escalated in the past year. The team already suffers from playing in the smallest stadium in the NFL. One that is also outdated in terms of fan experience compared to other new venues. Yet things came to a head when the franchise approached the CPD about opening a sportsbook inside the stadium, hoping to take advantage of the newly legalized gambling in Illinois. They were brushed off.

Two weeks later they placed a bid to purchase Arlington Racecourse International and its 326 acres of land. Many believe if the Bears win the bid, which they’re favored to do, then it will start the process of them leaving Chicago for Arlington Heights within the next few years. No doubt into a new stadium that they will own. This has led to serious concerns from Mayor Lori Lightfoot and others who desperately want to keep them in the city.

There is a big problem with all this.

Even if the CPD were to acquiesce and consider making further renovations to Soldier Field? It might not matter. According to Fran Spielman and David Roeder, the stadium is a complicated structure in a complicated location. Part of the problem is the most practical areas to expand aren’t overly enticing. If they wanted to establish better seating, it would require a major sacrifice that many in the community would never agree to. A number of architects who worked on the building during its early 2000s renovation explained.

About 5,000 seats could be added in the least desirable and least expensive areas — the north and south end zones. But expanding sideline seating would be pretty much out of the question, given the outcry that would surely follow, they said.

“A lot of things are possible. But what do you have to do to expand the seating? Do you have to tear down half of it? Do you have to remove the old colonnades, for instance? Chicago would not stand for damaging or changing the historic architecture. It’s a monument to the soldiers of World War I,” said venerable Chicago architect Dirk Lohan, who worked with Boston’s Ben Wood on the much-ridiculed renovation.

To add more desirable and expensive seats on the east and west sides of Soldier Field, Lohan said, “You would have to have supporting structure outside the colonnades. Meaning in the parks. And on Lake Shore Drive. That side is severely restricted because of the road.”

As much as fans want better accommodations at Soldier Field, tearing down the colonnades to get them is almost certainly out of the question. One way that might achieve the Bears’ ultimate goal of generating more revenue is establishing an entertainment district around the stadium. However, even that is a problem because lakefront conservationists would immediately seek to shoot it down. Similar to the George Lucas museum that never materialized.

Soldier Field is at the mercy of location and complicated politics

This is a big reason why the Bears are warming more and more to the idea of leaving. The suburbs offer much more space for building a stadium and surrounding district to their exact desires. It also would involve far less bureaucratic red tape to go through. Playing within the city limits offers plenty of perks. That Chicago skyline and the unique attributes of playing right on Lake Michigan are big selling points.

At the same time, congested roads, difficult parking, limited seating, and outdated accommodations have begun to outweigh the positives. The Bears aren’t the franchise they were back in the 1970s. One still at the mercy of limited funds. They’re a billion-dollar organization now. It wouldn’t be difficult for them to find the necessary investors to help build a new stadium and surrounding entertainment district in Arlington Heights.

All without fear of interference.

This is why Lightfoot and others have finally woken up to reality. If they don’t start acting fast, the odds are reaching a point where it’s a matter when, not if, the Bears end up leaving Soldier Field. They have to find a solution that would make the McCaskeys happy. By the sound of it, that is way easier said than done.