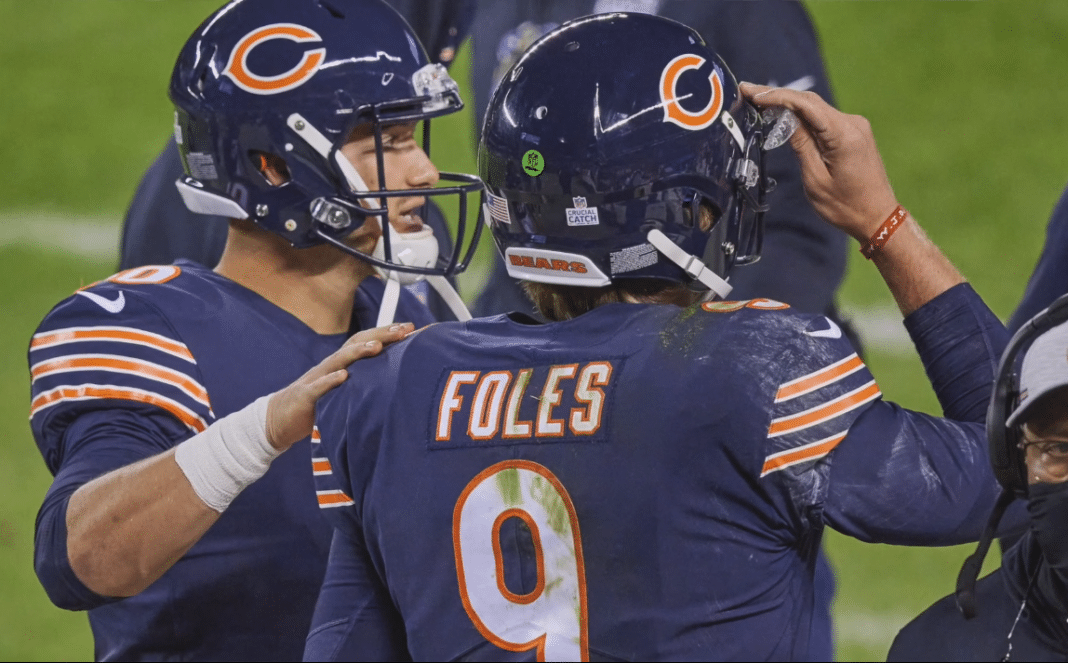 The Chicago Bears brass said “everything is on the table” regarding their quarterback plans for 2021. It’s crystal clear that something is going to change. Nobody knows what that is. Some hold out hope the team will give Mitch Trubisky one more chance. Others believe GM Ryan Pace and head coach Matt Nagy will go hunting for a top veteran. Deshaun Watson is the obvious name to watch but Dak Prescott, Matt Ryan, Matthew Stafford, and Derek Carr will be mentioned a lot too.

Second-tier guys like Jimmy Garoppolo and Ryan Fitzpatrick are sure to get a look as well. Everything points to this regime doing everything in its power to win in 2021. However, one person believes that plan may already be in motion. How? Based on a recent resource allocation. Brad Spielberger, a salary cap expert for Over The Cap and Pro Football Focus explained to Adam Jahns of the Athletic.

It centers around the forgotten man in all of this. Nick Foles.

“All of this points to Foles sticking around as the ‘bridge’ quarterback to the future,” Spielberger said. “Choosing Foles this past offseason among all the candidates in a way suggested that this was the long-term plan. Foles is one of the most well-liked players in the entire NFL and would serve as a great mentor/locker room galvanizer for a new quarterback. No disrespect to Mike Glennon whatsoever, but Chicago fans know that there is value in having a decent bridge QB option on your roster.”

Remember that Nagy and Pace stated quite clearly that there is still some evaluating to do in regards to Foles. That would seem to suggest they are considering him for a second look next season. A lot of Bears fans won’t want to hear that. However, it’s fair to remember Foles started out pretty well in his first few games as the starter including a big win over Tampa Bay. However, soon the injuries on the offensive line began to pile up.

Without any sort of adequate protection. Foles was a deer in headlights and the offense fell apart. By the time the Bears finally got the protection issues sorted out after the bye week, he was no longer the starter. It’s possible the Bears still think he can be viable with better protection. More than that though, it comes down to the primary thing he can give them.

Chicago Bears may have their eyes fixed on the upcoming draft

This point bringing back an interesting nugget that Brad Biggs provided a few months ago. He was discussing whether the Bears should give Pace another crack at quarterback after his failure in 2017 with Trubisky. While it wasn’t clear at the time, there was something he did reveal. According to key personnel guys around the NFL, there was a strong belief that if the GM survived, he would absolutely focus on drafting a quarterback in 2021.

The idea behind such a move would be buying himself more time to get the team pointed in the right direction. It’s not an uncommon tactic. Back in 2012, Dolphins GM Jeff Ireland was under a ton of heat from fans. Some even commissioned planes to fly over the stadium calling on ownership to fire him. In that subsequent draft, he took quarterback Ryan Tannehill 8th overall. Ireland ended up surviving through the 2013 season.

There are other examples as well. Does it work?

Sometimes. A lot will depend on if the young QB can make a good first impression. That comes down to whether the team can prepare him for the NFL quickly enough. This is where the idea of a bridge QB comes in. Look at the 2020 Chargers. They started the year with Tyrod Taylor under center, keeping prized top pick Justin Herbert on the bench where he could learn. Then Taylor got hurt. Herbert stepped in and had a terrific rest of the season.

That was enough to save GM Tom Telesco, if not head coach Anthony Lynn. Being able to secure a top young QB and putting him under the wing of an outstanding veteran and teammate like Foles isn’t a terrible plan. It comes down to whether the Chicago Bears can land the right young guy. Something that didn’t work for them last time.