This time of year it can be so easy to get caught up in conspiracies. Fans love them. So whenever an athlete posts something cryptic on Twitter or Instagram, there is immediate speculation about a potential move happening. The Chicago Bears got a taste of that on Wednesday when eagle-eyed fans spotted a post on the Instagram page of Akiem Hicks, his first since December. It was of him at Soldier Field last season sacking Aaron Rodgers.

Then, to further deepen the mystery, it was deleted. This raised tons of questions. Was it an accidental post? Did Hicks drop a hint at a possible Bears return? Or is he thinking about signing with the Packers? Nobody can say for sure because the former Pro Bowler has remained silent about his intentions for months. He made it clear last season he wanted to stay in Chicago. It just felt unlikely because a new coaching staff was coming in with a new defense. Perhaps minds have changed.

Credit to @ChiSportUpdates for the screenshot. 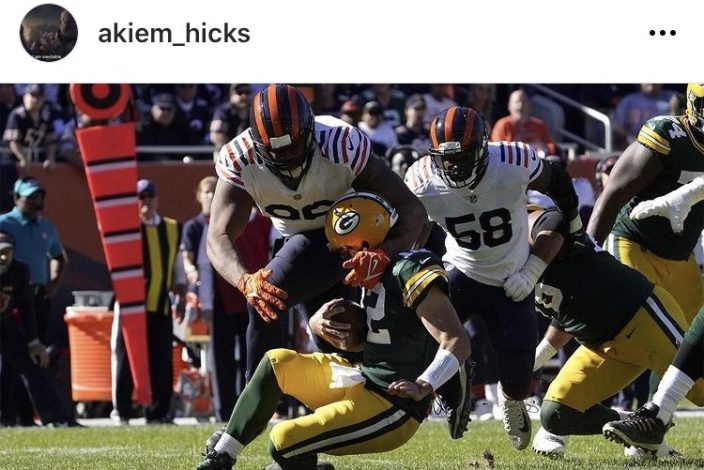 It is difficult to get too excited about something like this. Getting Akiem Hicks back would be great, but more often than not these sorts of things prove to be nothing. Then again, there is some logic behind the idea. Chicago has serious question marks on the interior of their defensive line. Outside of free agent Justin Jones, they haven’t made any significant additions in that area. Their biggest attempt fell through when Larry Ogunjobi failed his physical.

Under such circumstances, bringing Hicks back makes sense. When healthy he proved last season that he can still be a force on the interior, both against the run and as a pass rusher. Jones is more of a strong run defender, so moving him to nose tackle would be a better fit. Not to mention what bringing back #96 would do for the Bears’ locker room. His energy and leadership were infectious. Getting him back for at least one more year could give the entire enterprise a jolt.

The Chicago Bears likely won't be competing for the Super Bowl this year. It should be a rebuilding season...

During his four-year stint with the Chicago Bears, Matt Nagy only had one losing season. It was far from...

There is a certain hierarchy around the NFL regarding quarterback-wide receiver combinations worth respecting. Matthew Stafford to Cooper Kupp,...

Brian Urlacher never had what could be described as a buddy-buddy relationship with Jay Cutler. They were teammates and...

Max Scharping Has Trade Buzz. Why The Bears Should Be Interested

The Chicago Bears have an issue with their offensive line. With training camp three weeks away, they only have...

Training camp is still almost a month away for the Chicago Bears. This is the time of year when...