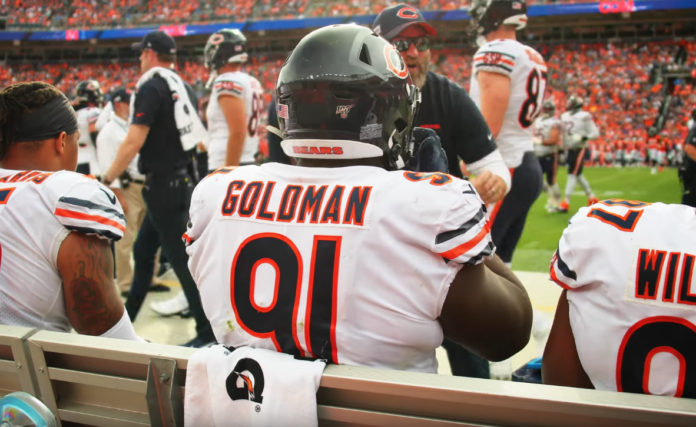 Warning signs blared a couple of weeks ago when Eddie Goldman failed to report for mandatory minicamps. It was something that caught many in the Chicago Bears locker room by surprise. They’d expected the 27-year old to return this season after opting out in 2020. By missing those practices without an excuse, it led to instant speculation. Could he be planning to stay away from the team again?

While some have carried it as far as retirement, new evidence suggests Goldman may have an ulterior motive. According to Tom Pelissero of NFL Network, the league is allowing another round of opt-outs for the 2021 season. Despite the arrival of vaccines, the risks for COVID-19 remain. Some players may not feel comfortable chancing it. Especially when some of them have the incentive to sit at home in the form of $350,000.

NFL players have until 4 p.m. ET next Friday, July 2 to inform their team if they’re opting out of the 2021 season, per source.

The NFL and NFLPA also agreed to more benefits for fully vaccinated players, including allowing them to collect per-game roster bonuses even if they miss a game because of a “breakthrough case.” From today’s memo to clubs: pic.twitter.com/E44E1NUsC1

Why is this important?

Goldman qualifies as a high medical risk due to previous medical issues. Dan Wiederer of the Chicago Tribune revealed as much last season when Goldman made his decision the first time around.

For Goldman, according to a source with knowledge of his thought process, the decision was “painful” but rooted in caution. The 26-year-old nose tackle qualifies as being of higher risk medically for complications from the coronavirus. He struggled to get past that.

So essentially Goldman pocketed $350,000 while sitting at home and doing nothing. Now he has a chance to do it for a second time. Think about it. Play a grueling 17-game season with the risk of COVID-19 hanging over you, or pocket a hefty check for basically nothing. Sure he stands to make a lot more if he plays, but $700,000 is plenty if you’re smart about it. Is it really so hard to think this might be what the nose tackle could be planning?

One thing is for sure. If Goldman does go through with this? His future in Chicago becomes more than questionable.

If he opts out again, he’ll be 28-years old by next offseason and will have not played football in two years. Like it or not, his health-first focus will have hung his team out to dry twice. As GM Ryan Pace has said before, “The best ability is availability.” If the Bears can’t trust him to be there for the team, then it is time to seek out alternatives. One could even say they might’ve seen something like this coming.

They drafted Khyiris Tonga in the 7th round back in April. Then they signed veteran Mike Pennel last week. They have much better depth in the middle than they did a year ago. While neither is what Eddie Goldman is as a talent, they should be able to keep the Bears’ run defense respectable. By next offseason, Pace will then be free to seek out potential long-term replacements.

Hopefully, it doesn’t get that far.

Despite training camp not beginning for over a month, the Bears suddenly have two major deadlines to watch out for. July 2nd is the opt-out deadline. Something that figures to determine whether Goldman will play in 2021 or not. Then the team has until July 15th to work out a possible long-term deal with Allen Robinson. Should be an interesting next few weeks. Perhaps the Bears can make some magic happen.