GM Ryan Pace and head coach Matt Nagy both made one thing clear. Andy Dalton is the starting quarterback in 2021. This shouldn’t be a surprise. They need to win this season. Their best chance to do that is with a veteran. Dalton was the best they could do. However, does this mean the Chicago Bears will avoid drafting somebody early? No. It comes down to who they might covet and how aggressive they’re willing to be. Is Justin Fields high on that list?

I reported last week that the Bears were keeping a close watch on the Ohio State quarterback. There was a sense at Halas Hall he might drop despite months of hype that he would be a top 5 lock. Now it appears those beliefs are growing. Not just in Chicago but elsewhere. A source informed me that a number of organizations feel it’s possible Fields might drop. ESPN draft insider Todd McShay even said he’s been hearing the same thing. His latest mock draft had Fields going 11th overall to the Patriots.

Why is Fields in such danger of falling?

There are a few factors. Despite being arguably the most physically gifted in the 2021 class, evaluators have concerns about his field processor. They think he’s too often a tick too slow in reading more complex defenses. His games against Northwestern and Alabama were good examples. Then there is the stigma of coming from Ohio State. Despite it being a powerhouse program, it has an ugly history with their quarterbacks in the NFL.

Art Schlichter was a monumental bust as the 4th overall pick in 1982. Then Dwayne Haskins was taken 15th overall in 2019 and lasted just two seasons in Washington before flaming out. This doesn’t even count 3rd rounders like Tom Tupa and Bobby Hoying who failed to last long in the league as well. Fields is battling against some ugly history that teams are having a hard time ignoring.

Could the Bears pounce if Justin Fields falls far enough?

That is the toughest part of the question. I mentioned a couple of days ago that drafting a quarterback in the 1st round isn’t going to win any points with Bears ownership this year. George McCaskey’s expectations are to win. Taking a QB early isn’t going to buy Nagy or Pace extra time. So if they plan to do it, they better think they can still find some help for the rest of the roster.

By that same token, the idea makes a ton of sense. Justin Fields spending a year learning behind Andy Dalton? It has to give Nagy visions of what the Kansas City Chiefs did in 2017. Putting an uber-talented prospect in Patrick Mahomes behind a consummate veteran in Alex Smith to learn. Then the next year unleash him when he’s ready. It would be a bold plan.

Will they do it?

That may depend on how far Fields falls. If it ends up being just to the bottom of the top 10 with teams like Carolina and Denver needing QBs? Don’t count on it. However, if he somehow slips out of the top 10 in the 11-14 ranged? That would significantly lower the price of moving up to get him. It sounds crazy but the draft has proven over the years that quarterbacks falling happen a lot. 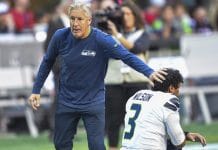