Covering a football team that’s massively frustrating and so unbelievably inept offensively is tough.  But that’s the Chicago Bears for you.  I meant this when I said it on Sunday:

Those of us who cover the Bears couldn't be more thrilled. We get to watch real football today. https://t.co/tZxmc2xwe1

Sports are meant to be fun!  But the Bears just aren’t very fun right now.  After starting 5-1, they’ve lost four straight games, each one in mind-numbing fashion, and find themselves with a tough road to the playoffs at this point.  Losing to the Minnesota Vikings last Monday night, at home, was the latest touch-base with rock bottom.

1. The best thing I can say about the Bears a day after they hosted a divisional rival, in prime time, in the middle of a playoff race?

All hail the bye week for sparing us from watching this miserable mess of an offense for two weeks.

The Bears are now preparing for the Green Bay Packers this Sunday night at Lambeau Field, and while another prime time game is not what the Bears, or America, needs right now, this is an interesting game.

Ryan Pace and Matt Nagy’s futures hang in the balance.  While there’s an outside chance both could return, even if Chicago misses the playoffs, losing (especially badly) to Green Bay could seal their fates.  Even when the Bears aren’t playoff-bound, games against the Packers matter — a lot.  If Pace and Nagy want to save their jobs, beating the Packers would go a long way to convincing the McCaskeys for at least one more year/attempt to get this right.

With that, let’s reach into this week’s Bears Mailbag.  Thank you to everyone who submitted questions.  Follow me on Twitter @DhruvKoul to continue the conversation.

— Move Phillips to a different role.

— Target someone like Marvin Allen or Thomas Dimitroff as GM.

To clarify this a little bit…

I don’t actually think the Bears will move Ted Phillips anywhere — fans should rest assured that Phillips doesn’t actually have any say in football operations.  However, it could be helpful, for everyone’s sake, to move Phillips to a new role to run the Bears’ business.

Why make Ryan Pace the new President of Football Operations?  Well, he still has value and is worth keeping around!  He has built an incredible defense, can clearly identify strong talent in the later rounds of the draft and the bargain bin in free agency, and has generally managed the cap well.  He does a lot of things well as a GM — it’d be worth keeping him and his input around, even if the Bears hire a new GM.

People may be concerned about seeing Dimitroff’s name here, considering how things ended in Atlanta for him and Dan Quinn.  But Dimitroff put together a heck of a team, talent-wise.  Coaching is the biggest reason they weren’t able to build on their Super Bowl loss to New England.

What do you think will happen in the offseason? Does the GM and coach get fired? Is Robinson back? Are some big defensive players traded for picks?

It really depends on what happens in these last six games — and frankly, more weight should be given to the games against Green Bay.  The McCaskeys use the Packers games to gauge where they are as an organization.  A bad showing against the Packers could seal their fates.

Since there is no reason to believe things will improve enough on offense to pull off a winning streak to qualify for the playoffs, my guess is both Pace and Nagy will be out.  The new regime will have many decisions to make — namely, should the Bears work on a soft retooling to compete one more time, or blow it all up.

I don’t think it’s likely that Allen Robinson returns — instead, he’ll probably be tagged and then traded.  (Yes, there should be a market for him.)

The new regime will likely be working with limited resources — especially with an expected salary cap in the $175 million range.  The Bears also have a massive discrepancy in cap dedicated to their defense vs. their offense, so they will likely have to make some difficult decisions with the defense.  I’d imagine a combination of these players would be available (as painful as it is):  Kyle Fuller, Akiem Hicks, and Khalil Mack.  Robert Quinn should definitely be made available, but it’s unlikely there will be a market for him.

Overall, expect a busy, intriguing, yet still painful offseason for the Bears.

I'm never going to speculate about Ted Phillips — I think it's clear from previous years that it's a wasted exercise.

I truly think significant changes depend on what happens on Sunday night. The McCaskeys will not tolerate another prime time embarrassment vs. Green Bay.

It depends on where the Bears end up draft-wise. Assume they remain 16th, I think it's too difficult to trade up, and I don't think there will be a QB worth taking at 16 (value-wise).

IMO, the Bears are better off investing in infrastructure, first (rebuild the OL, etc.).

I think he is "a" problem; we will see if he has solutions this Sunday night. While the last four weeks have been very bad, this bye week was their first true opportunity at a thorough evaluation. If they run the same scheme out there, the results will be the same.

Ironically, I think this team *needs* Mitch's skillset (namely, his mobility) right now. So it should be Mitch.

I think if the Bears simplify the scheme to Weeks 1 & 2 type stuff, it should help him. But Trubisky has generally been an overly amped player. We'll see.

Assuming Bobby Massie is still out and Sam Mustipher is healthy, here is the OL combo I'd like to see:

Ifedi and Coward have both been liabilities, and I think Hambright and Simmons are probably still too raw to throw out there right now.

I think the following players are, and should be, safe, at least for next year:

If the Bears are rebuilding, guys like Mack, Hicks, Fuller, Quinn (obviously), A-Rob (tag and trade) should all be available.

Ultimately, the owners are responsible, but they can't fire themselves, and they're not going to sell the team.

They tried a different approach six years ago when they used a consultant to guide them through the GM interviews. It's up to them to keep trying.

It appears that's the direction things are moving. As far as points go, the Bears need to show they can score an offensive touchdown in prime time. They haven't in their last two games!

My game preview thread comes out Friday with a prediction. (It won't be good.)

1. Lower your expectations now to prepare.

Why was it a blissful bye week?

Because no one had to watch the Bears' offense. Instead, we could all watch functional ones! 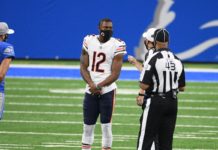