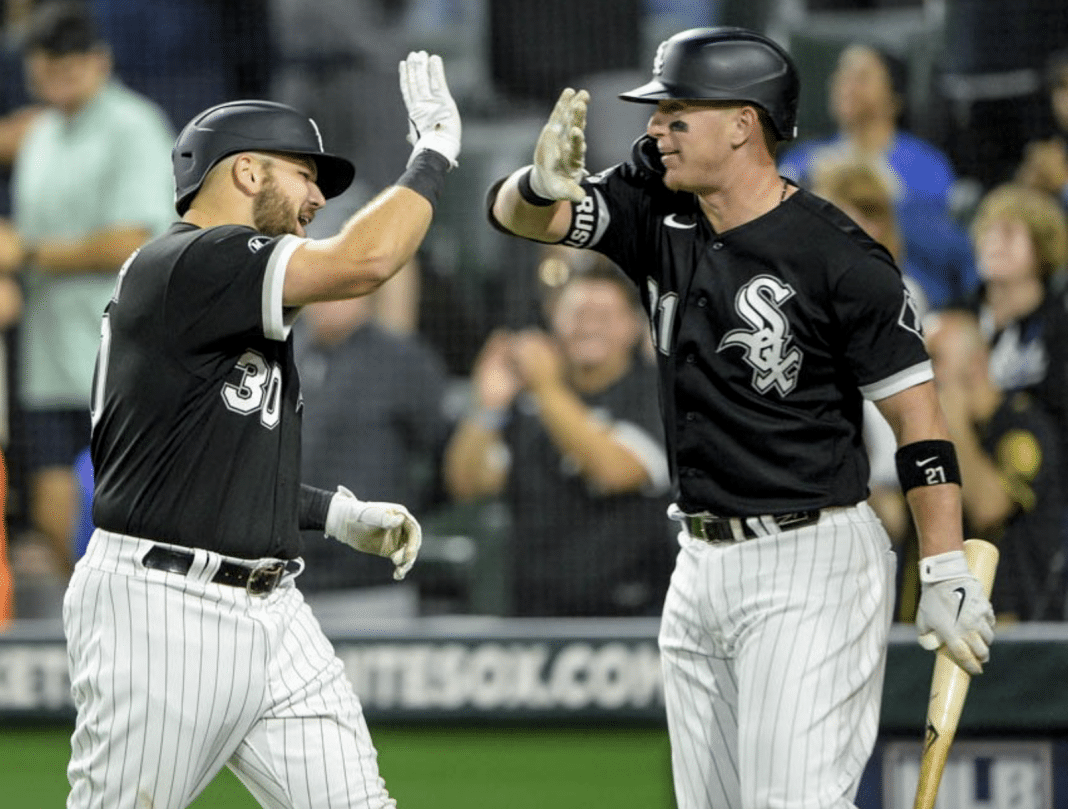 Simply put the White Sox have been dominated by the Astros this season. Heading into Sunday’s game the White Sox were 0-5 against the American League West leaders and had been outscored by a combined 25 runs.

“We just had to beat them,” Tony La Russa told the media after Saturday night’s 10-1 romp of the Astros. After growing concerns that the White Sox were incapable of beating good teams, the White Sox put those fears to bed. At least for now.

The White Sox put on a show in front of a raucous crowd of 34,304 people. The tone was set early when a fan tossed an inflatable trash can onto the field. The amusement didn’t stop there.

Lucas Giolito was brillent. He turned in his fifth career complete game and his second against the Astros. Giolito was working on a one-hit shutout through seven innings until Abraham Toro hit a two-out home run in the eighth inning.

The tall right hander finished the day with eight strikeouts and no walks. It only took him in 107 pitches to get through nine innings. Giolito recorded 17 swings and misses and lowered his ERA to 3.90.

“I love our team because we’ll pick each other up, Giolito said. “Today was the night where everything was going. We were able to get that momentum going early, some early runs, and riding through it for nine innings.”

Lucas Giolito recorded his fifth career complete game tonight! He is the fourth White Sox pitcher to throw a complete game this season, the most by any team in baseball. pic.twitter.com/vamS95PMcP

The White Sox bats stole the show, however. Zack Collins and Tim Anderson got the party started with back-to-back home runs in the third inning to give the White Sox a 2-0 lead.

Tim Anderson was not done. He singled in the fourth inning to drive home another run. Anderson extended his hit streak to 14 games and was a triple shy of the cycle. He also extended his run scored streak to ten games which ties a franchise record for consecutive games with a hit and a run scored.

Gavin Sheets hit a two-run homer in the sixth inning to extend the lead to 6-0. It was the rookie’s fourth home run of the season. Later in the game, Jose Abreu rifled a ball to left-center field for a three-run homer. If you blinked you may have missed it leaving the ballpark. The home run tied Carlton Fisk for fourth all-time on the White Sox leader board for home runs.

RT this post to enter for your chance to win a @dunkindonuts gift card! Rules: https://t.co/gJHcLpnxvS pic.twitter.com/JDR0aHqc9n

The final home run of the night was the most memorable. Jake Burger connected for his first career home run off Austin Pruitt. The home run was not cheap either. The ball traveled 456 feet to deep left and had an exit velocity of 115.2 mph. A smile wore across his face as he touched first base.

“I was floating around those bases for sure,” Burger said. “Right when I hit it, I’m like, ‘Oh, that’s gone in my head. That’s when I cracked a smile. You think about that growing up and when you are little, hitting a big league home run and stuff. Nothing is like it. That experience is pretty awesome.”

The White Sox have hit 25 home runs in their last 13 games, homering in 11 contests and recording six multi-homer efforts. They are also now 55-36 and have won six of their last seven. The ugly taste of losing to Houston five games in a row was quickly washed away.

“They beat us five games. You think we’re going to let them beat us six games? No,” Tim Anderson said. “We’re definitely going to go out and stop the bleeding and win one. That’s what we did tonight.”