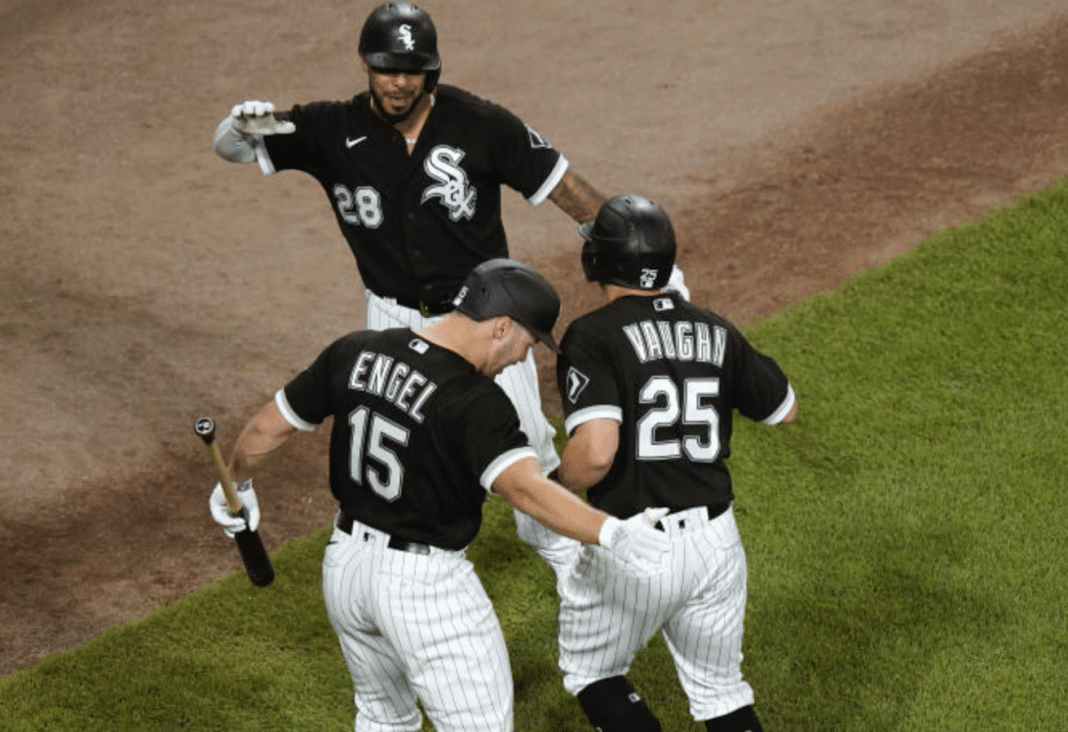 For the second time in less than a week, the Chicago White Sox found themselves trailing by a run in the seventh inning. Unlike last Friday’s game against the Tigers, the White Sox had yet to get on the scoreboard.

Robbie Ray had the White Sox baffled through six and third innings. White Sox hitters had only been able to muster four hits while falling victim to a strikeout thirteen times. Andrew Vaughn then changed the game with one swing of the bat. He took a 97 mph fastball the other way and blasted it over the right-field fence to tie the game at one apiece. It was a great piece of hitting that spoiled Ray’s gem and electrified the 12,761 fans in attendance.

Vaughn is beginning to have a knack for a home run in clutch moments. Earlier in the season, he hit a game-tying home run in the ninth inning off of Aroldis Chapman. It was the first run Chapman had allowed all season and it sent the game into extra innings.

Tuesday night was a game that could have gotten out of hand early. The fact that the White Sox were within one swing of tying the game is a testament to how hard Carlos Rodón battled throughout the evening. Rodon did not have his best stuff and had to work hard early on. In the first inning, he needed back-to-back strikeouts to work out of a jam with runners on the corners.

GOT HIM TOO! Andrew Vaughn gives it a ride. pic.twitter.com/IyM33AcaeG

In the second inning, he surrendered two straight hits allowing Jonathan Davis to push across a run with a sacrifice fly. Rodón was able to limit the damage however and punched out Marcus Semien with a runner on third base to end the inning. Rodón was north of 50 pitches when the inning ended.

Toronto put traffic on the bases once again in the third inning, making it difficult for Rodón once again. He responded by striking out Teoscar Hernandez then inducing an inning-ending double play.

It was a battle for Carlos Rodón all night yet, he was able to keep the White Sox in the game. Rodón finished the night with a pitching line of five innings, six hits, one run, two walks, and eight strikeouts. The grit he showed on the mound is one of the countless examples of why this team is special.

“All hail Carlos Rodón,” Tony La Russa said after the game. “What he did those first five innings to keep it at one run, he’s the star of the game and everybody knew it. The bullpen did a good job but Carlos, just an amazing five innings. This wouldn’t have happened without him.”

The bullpen did their job slamming the door. Jose Ruiz, Evan Marshall, Garrett Crochet, and Liam Hendriks each tossed a scoreless inning.

The offense finally rewarded the effort from the pitching staff in the eighth inning. Jose Abreu started things off with a base hit. Yermín Mercedes followed suit, then Yasmani Grandal did what he does best, walk. Who should come strolling to the plate in the game’s biggest moment? The rookie Andrew Vaughn. Coming off his game-tying homer an inning earlier, the rookie rose to the occasion once again. He was mere feet from a grand slam, sending a ball to the warning track that scored Abreu and sent Mercedes to third. His long sacrifice fly opened the flood gates and, the rest of the offense flexed their muscle.

Adam Eaton hit an RBI single, Leury Garcia hit an RBI triple, then Tim Anderson hit a sac fly to score Garcia. When the dust settled, a 1-1 tie had flipped into a 6-1 lead.

This team does not quit. The entire team scrapped and clawed to win a game that they had no business winning after six innings.

“We have the fight in us,” Andrew Vaughn said. “One through nine and every pitcher who goes to the mound. It’s unbelievable. We can go out there and know we have a potent lineup and just got to get our shot.”

“They didn’t care about the results prior to the upcoming at-bats and they made some big hits and we scored runs. They turned the page pretty quick and that’s the kind of offense we have. They can spark up in a second. ”

Overall it was a gritty effort on the Southside. The White Sox have made it clear La Russa’s boys don’t quit.