At 4-5, the Chicago Cubs aren’t necessarily coming out of the gates hot, especially after dropping two of three to the Pittsburgh Pirates this past weekend — two of which were blowouts. Let’s take a look at the body of work as we give the Cubs their first offensive progress report of the season after nine games.

While this is covered in more detail on the Pinwheels & Ivy Podcast, there is plenty to be concerned about despite it just being nine games in. Problematic may be a better word, and a majority of issues will clear up over a larger sample size.

Offense: Ghosting in the Big Moments

Other than third baseman Kris Bryant and shortstop Javy Baez, the Cubs offense has been a collection of failure. And, while KB and Javy are by no means tearing it up, the Cubs have still managed to manufacture enough runs to hover at near .500 despite one of the worst offensive starts to a season in quite some time.

Bryant is doing what Bryant does: getting on base. Last year, when KB took a pitch outside of the strike zone, 24% of the time, it was still called a strike. Only Brandon Belt was close (14%) in 2020. In 2021, the strike zone has returned for KB, allowing him to work into 3-1 fastball counts instead of being forced into a 2-2 count after getting jobbed by a ball being called a strike.

The results have been six extra base hits (two homers, four doubles), which has him already nearing his 2020 production, especially in doubles (he hit five in all of 2020). He has set the table, taken five walks, has a .361 OBP and has scored five runs while driving in another four. He has been the most production player on the roster thus far.

Baez has also been decent, after a slow start in the first series. Javy ripped a solo homer for the Cubs’ only run Sunday, after he collected a pair of hits on Saturday. The walk-year shortstop leads the team in average (.242) and RBI (six) but only has a .286 OBP with a team-high 15 strikeouts in just 33 at-bats. Still, in a field of underperformers, Javy’s numbers dwarf a majority of the roster.

While Baez isn’t far behind but has seemingly drawn more ire than recent seasons with his failure to show better plate discipline. In his three strikeouts Sunday, Javy swung and missed at just one pitch inside the strike zone. Every other strike (including one on a ball 18 inches off the plate and in the dirt with one out and a runner at third) was out of the zone. He is actually hitting more groundballs this season than any of his career (61.1% vs his previous high in 2019 at 49.9%) while striking out almost 50% of his at-bats. That must improve until the rest of the lineup gets straight.

But KB and Javy aren’t the problem. The rest of the lineup has been a minefield of failure. When you take away KB and Baez’s numbers, the Cubs lineup is batting a collective .145. Hideous. Anthony Rizzo and Ian Happ have just four hits, new addition Joc Pederson has just five, and David Bote — who “won” the starting 2B job over red hot Nico Hoerner — has just two hits all season. Thanks to a pair of hits on Sunday, Willson Contreras was able to bump his average to .200, making him the third Cubs starter hitting .200 or better.

Not great, Bob. The Cubs are going to need to put up more than 2.9 runs per game, their current clip. Hopefully manager David Ross and hitting coach Anthony Iapoce can start pushing the right buttons. With the hottest hitter of Spring Training, Hoerner, playing exhibition games as the Cubs front office plays service time games once again, somebody is going to have to snap out of it.

With the Milwaukee Brewers series opening today, it doesn’t get any easier as the Cubs will be facing Freddy Peralta-Brandon Woodruff-Corbin Burnes at Wrigley North. These numbers may actually get worse before they get better but stranger things have happened for the progress for the Cubs may be a week out. Right now, it’s a watchful waiting approach with a side of hopefulness as so many of the starting nine struggle to make progress and get their sea legs early in the 2021 season. 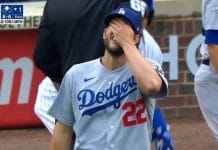 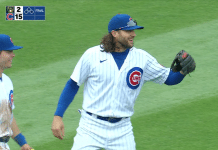