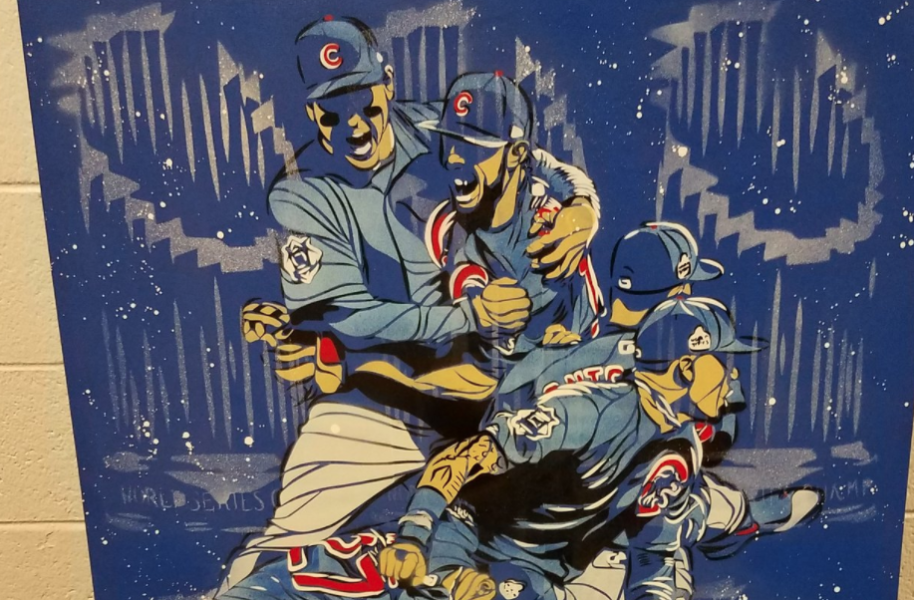 “It’d be so Cubs for Javy to homer here after Rizzo tanked one last night.”

That’s what I messaged a buddy of mine last night as I kept tabs on baseball while binging Season 3 of All American.  (Great show, by the way.  Highly recommend.)

“I mean, sure.  What else would you expect?”

A moment later, a Wade Miley off-speed pitch was deposited into the left-field seats.  Cue the crowd, the Javy jog, and the Francisco Lindor excitement.

For those that follow or read me here on sportsmockery.com, you know me as a Bears analyst.  While I grew up a fan of all Chicago sports teams, I learned to compartmentalize emotion while covering the Bears and to be objective.  You’ll never see “FUCK YOU BEARS” or “SUPER BEARS SUPER BOWL” from me.  I love the NFL and care about the game at an obsessive level way too much to get too high or too low on either the Bears or anything else I see.  Everything I say about football is based on true, objective analysis.

But I’ve never gotten to that point with the Cubs.  I’ve never been able to.  They were my first love.

I remember opening up a Chicago Tribune paper when I was four years old — during peak Michael Jordan / Bulls dynasty years — and looking for the Comics section.  While perusing, I stumbled upon a picture of Sammy Sosa in the Sports section.  Something about a two-homer game.  I also saw the adorable Cubs logo of the bear cub taking a step on his jersey and was immediately hooked.  I wanted to learn more about this baseball thing.

You can proceed to laugh.

Eventually, I learned what WGN AM 720 was and I started listening.  And I just couldn’t get enough of listening to Pat Hughes or Ron Santo.  They were engaging, funny, and genuinely cared about the Cubs.  Cue the Cubs fandom.  And while most games ended with the other team having a bigger number in the “R” column, I still loved listening and watching.

In fact, my favorite thing to do was to watch with the game on mute and the radio on.  (I’ve learned since then that I’m not the only one who thought that was clever.)

In 2003, I was in 7th grade.  Close to a decade of disappointment already in as a Cubs fan, I, along with all of my classmates, could basically taste an NLCS victory and a trip to the World Series.  The buzz at school was INTENSE.

While some of my friends were planning a watch party for Game 6, I declined.  At 13 years old, I was bad company for watching sports: nervousness, excitement, anger, the whole deal.  And I thought I should watch this where it all started — at home.  And while my parents — being first generation immigrants — weren’t really sports fans, but they understood my excitement and opted to watch with me.

We all know what happened.

I went to school the next day a nervous wreck for Game 7.  And I remember our principal, right before school let out, said on the PA system: “…get home safely.  And yes, the Cubs WILL win today.”  The confident words of an adult seemed very reassuring at that moment.

We all know what happened.

I was in college when Ron Santo passed away.  I couldn’t believe it when I read it, and then the memories from childhood — listening to him get emotional with every bad Cubs error or timely Cubs hit — flooded back.

I skipped classes that day (like most days) to read tributes to him and his legacy as a Cubs player and beloved analyst.  And while the Cubs were in a rough stretch at that time and not quite close to competing for a title, it hit me hard that the Cubs’ #1 fan would never see a championship.  I thought about how many generations had also departed never seeing a Cubs championship.

Twenty or so years in myself, would I be the same way?

I remember the day when the Cubs hired Theo Epstein.  The palpable excitement and trust that, “OK, this guy is a fucking genius.  If anyone knows how to construct a team, it’s him.”

Slowly but surely, a worthy team was taking shape.  And when Joe Maddon was hired and Jon Lester was signed, THAT signaled the “all in.”

I still remember the news of Lester breaking.  I was cooped up in my hotel room in Detroit, dying of the flu and not being at work like I was supposed to.  But the Lester signing woke me from the doldrums.  And the “Cubs have signaled they’re competitors” analysis healed me.  (And Tamiflu, of course.)

The Cubs “were back.”

So many moments from the 2015 season still seem incredible to this day, from a team that was supposed to be quite good, but not NLCS good!

Kris Bryant’s walk-off homer against the Rockies seemed to signal their true arrival.

Kyle Schwarber’s barrage of moonshots, especially his world-famous one against Kevin Siegrist in the NLDS.

Jake Arrieta’s world-class season, including no-hitting the Reds in a 16-0 shellacking.

Hector Rondon’s brilliant NLDS pitching nailing down a spot in that NLCS.

Just wow.  That 2003-level excitement (and nervousness) started to rear its ugly head.

Of course, getting mowed down by New York Mets’ pitching staff hurt, but it was clear that this wasn’t some “last gasp” attempt.  The Cubs were going to be back.

We all know what 2016 was like — for the generations of Cubs fans who’d suffered for so long, for so many of their loved ones who never got to see what we saw on that November night, it was a flood of emotions experienced like never before.

I remember being at Pub Royale in Chicago for Game 6 of the NLCS.  We’d seen the Cubs jump out to an early lead against Clayton Kershaw, and Kyle Hendricks looked to be on his game, settling the nerves a bit for the walk over.  After Anthony Rizzo’s big homer against Kershaw, the food went down much more easily.  And when Rizzo finally caught the second-leg of Yasiel Puig’s double-play ball in the ninth inning, Pub Royale exploded in cheers.  Hugs.  Laughter.  Crying.  I was the only actual Cubs fan in the group of friends that I’d come with, but suddenly, it seemed that group had expanded.

Thank you, Cubs, for that elated night.

*Fast forward to the World Series*

Going down 3-1 in the Series was certainly heartbreaking, but there was almost a sense of resignation at that point.  A clutch Kris Bryant home run in Game 5 against Trevor Bauer to tie things at 1 seemed like a “last gasp” bit of good news before the curtain fell.  But alas, a gritty 3-1 win in the special season’s final game at Wrigley sent the series back to Cleveland.

When the Cubs jumped on Josh Tomlin in Game 6 — a 3-0 lead in the first inning and a 7-0 lead after three — I couldn’t believe it.  We were getting a Game 7 of the World Series.  And the Cubs were going to be playing in it, on the road, in a city that’s experienced similar baseball heartbreak for so long.

We all know what happened in that game.  But a quick story about my own Game 7 roller coaster:

I was at a work dinner in Overland Park, KS for first pitch.  We’d gotten there early — at my request — so I could lock myself in my hotel and watch the most torturous several hours of my life as a sports fan.

But unfortunately, with an order for 14 people, the food took time and folks were still eating when first pitch rolled around.  Luckily, though, they had a TV set to Game 7.

A few seconds later, I yelled, “Let’s go!” as Dexter Fowler’s leadoff fly ball just cleared Rajai Davis’ glove over the center-field fence.  My team reacted with a, “That was quick.”

By the time I got to the hotel, it was 1-1.  So the nerves were back.  The middle innings  didn’t help, with the giddy comfort of a 5-1 lead evaporating to 5-3 on a FUCKING WILD PITCH.  David Ross’ shocking homer helped again.

I’ll never forget my stomach dropping when Jason Kipnis connected on Aroldis Chapman’s slider in the ninth inning at a scary launch angle … only for that thing to curve foul.

And when the rain delay came, I couldn’t take it anymore.  I had to turn it off and go to bed.  I had work in the morning.  This was just too scary.  Whatever happens, I’ll read about it in the morning.

As my heart raced with the lights off and me trying to channel it into some shut-eye, my phone buzzed.  I had to look.

“Here we go…” was the text from a friend of mine.

Fuck it, I’ll just turn it back on and I’ll just drink a truckload of coffee tomorrow.

You know the rest.

I jumped up and down, yelling at the top of my lungs — calling friends and basking in the delight of being a fan of THE WORLD CHAMPION CHICAGO CUBS.

I was describing everything I described above to a friend when there was a knock on my hotel room door.  I hadn’t ordered anything…

“Sir, we’ve gotten noise complaints about your room all night.  Everything okay?”

“My man, I’m from Chicago.  Cubs fan til the day I die.  I’m right there with you.  Come down to the hotel bar where we were watching.  Now we’re all celebrating.  Drinks on me.”

Obviously, the Cubs never made it back to the World Series.  It was all a bit downhill from there.  Offensive struggles at inopportune times plagued this team from their “lightning in a bottle” 2016 season.  While the Cubs enjoyed regular season success, they just weren’t the same team.

The Brewers caught up to them and surpassed them.  The Dodgers finally exorcised their 2016 NLCS demons against the Cubs.  The Cubs had simply reached their peak and plateaued.

It was time for changes.

But the carnage we just saw at the 2021 trade deadline was anything we’ve ever seen, and I have no idea when the Cubs will return to prominence again.  Tom Ricketts and Jed Hoyer have touted this breakup as a “retooling”, but it’s deeper than that.  This round of moves isn’t an ordinary round of moves.  A total decimation of a once-great roster and players whose legacies in Chicago are secure forever.

Rizzo, the heart and soul of the Cubs since his acquisition, dealt to the Yankees.

Baez, the most electric player the Cubs have ever seen, to the Mets.

KB, the savior, to the Giants.

And just like that, the Cubs as we knew them were gone.

I know I’ve said a lot, but what I haven’t said enough of yet is “Thank you.”

Thank you, Theo (and Jed Hoyer), for constructing a roster that’s been immortalized.  Though I’m mad at Hoyer at the moment.

Thank you, Rick Renteria, for your contributions to several of these young players before Joe Maddon took over.

Thank you, Joe, for bringing a style of managing Chicago’s never seen before, and for pushing many of the right buttons en route to the World Series.  (Some, though, I’ll always question.  Like, why take out Kyle Hendricks so early in Game 7?!?!)

And for the dearly departed players, thank you to Rizzo, Javy and KB, for making baseball fun again.  Thank you for being easy to root for.  Thank you for doing so much for Chicago beyond the baseball field.  And finally, thank you for delivering something we never thought we’d see — and what so many never got to see.  It was truly life-changing.