The Chicago Cubs are an American professional baseball team that plays in the National League Central Division of Major League Baseball in the United States. The Cubs were originally known as the White Stockings and were a founding member of the National League in 1876. It wasn’t until 1907 when the team officially became known as the Chicago Cubs. The team plays its home games at Wrigley Field, their home ballpark since 1914, located in the Lake View neighborhood on the North Side of Chicago. 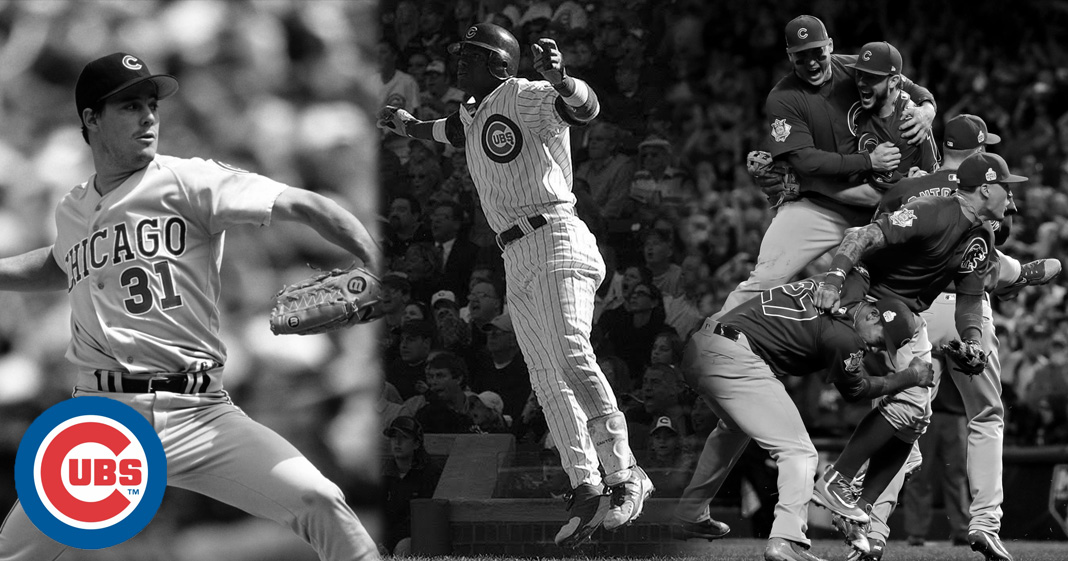 A few years later, William Hulbert, the president of the Chicago White Stockings, was a key figure in forming the National League of Professional Base Ball Clubs following the 1875 season. Hulbert was able to convince the owners of the St. Louis Browns, Hartford Dark Blues, Philadelphia Athletics among other teams to form the new National League, marking the end of the National Association.

Led by Adrian “Cap” Anson, the team won six National League pennants from 1876-1886, capturing league titles in 1876, 1880-82, 1885-86. During Anson’s era with the team, sportswriters began to refer to the club as the Chicago Colts or simply “Anson’s Colts” because of his dominance on the baseball field.

Following Anson’s departure from the franchise in 1897, the media began to refer to the team as the Remnants or Orphans. The nickname “Cubs” first appeared in the newspaper in 1902, gaining popularity through the next four years. In 1906, the team was only referred to as the Cubs and the team acknowledged the nickname in 1907. A cub was added to the team logo in 1908 and “Cubs” first appeared on uniforms in 1909.

The first official World Series in Major League Baseball history happened in 1903. During their franchise history, the Chicago Cubs have won the World Series three times. The first two championships came in consecutive years, winning back-to-back titles in 1907 and 1908. The Cubs did not win their next World Series until 2016 when they ended the longest championship drought in American sports history.

The 1907 World Series featured the Chicago Cubs and Detroit Tigers. The Cubs ended the regular season with a 107-45 record, winning the National League pennant by 17 games. Meanwhile, the Tigers went 92-58, finishing 1.5 games ahead of the second-place team in the American League.

The 1907 World Series took place between Oct. 8-12, as the Cubs beat the Tigers, winning the series 4-0. The first three games were in Chicago, while games 4 and 5 were in Detroit. The first game of the series ended in a tie. The Cubs outscored the Tigers 16-3 in the four games they won.

Jack Pfiester, Ed Reulbach, Orval Overall, and Mordecai Brown were the winning pitchers for the Cubs.

The 1908 World Series featured the first rematch in the early history of the event, as the Cubs and Tigers once again matched up for the championship. The Cubs won the World Series 4 games to 1, outscoring the Tigers 24-15 in the five-game series.

Mordecai Brown and Orval Overall each won two games as the starting pitchers for the Cubs, while George Mullin was credited with the lone Tigers win in the series, earning the victory in Game 3.

While the Cubs appeared in several World Series in the next 108 years, the team did not win their next title until 2016. After winning the division by 17.5 games and leading MLB with 103 wins, the Cubs began the 2016 postseason by facing the San Francisco Giants.

The 2016 World Series pinned the Cleveland Indians against the Cubs. The Indians stormed out to a 3-1 series lead, but the Cubs erased the deficit and on Nov. 2, 2016, the Cubs defeated the Indians 8-7, in Game 7 to win the World Series 4 games to 3. Ben Zobrist was named World Series MVP.

Since 1876, the Chicago Cubs have won 17 National League pennants, but Major League Baseball officially started to count postseason play in 1903, when the first World Series happened, featuring the winners of the National League and American League.

Since MLB began to recognize the playoffs, the Cubs have officially made 21 postseasons in team history.

In the 1910s, the club won two pennants in 1910 and 1918 but did not win either World Series. From 1929-1945, the Cubs won another five pennants but were unable to win a World Series title in any of those five appearances.

The franchise then entered a long playoff drought after 1945, not appearing in the postseason until 1984. After finishing the 1984 regular season with a 96-65 record and winning the National League East Division Title, the Cubs matched up against the San Diego Padres in the National League Championship Series. Despite having a 2-0 lead in the best-of-five series, the Cubs lost three games in a row and were eliminated by the Padres. San Diego went on to lose the World Series to the Tigers.

The Cubs won their second East Division title in 1989, ending the season with a 93-69 record. The Cubs faced the Giants in the National League Championship Series and lost to San Francisco 4 games to 1. The Giants eventually lost the World Series to the Oakland A’s.

The Wild Card era in Major League Baseball began in 1995 and in 1998 the Cubs made the playoffs as a Wild Card team. The Cubs were swept by the Atlanta Braves in three games.

In 2003, the Cubs won their first Central Division title and played the Braves in the division series. The Cubs beat the Braves 3 games 2, winning their first postseason series since 1908 when the Cubs won the World Series. The Cubs were then eliminated from the playoffs by the Florida Marlins, losing in seven games after going up in the series 3 games to 1. The Marlins then won the 2003 World Series, defeating the New York Yankees.

The Cubs won back-to-back Central Division championships in 2007 and 2008, but both teams were swept in three games by the Arizona Diamondbacks and Dodgers, respectively, in the divisional round of the playoffs. Despite the failure in the playoffs, this marked the first time since 1907-1908 that the Cubs made the postseason in two straight seasons.

In 2015, the Cubs won 97 games and were the second Wild Card team in the National League. They beat the Pittsburgh Pirates in the Wild Card Game and then defeated the St. Louis Cardinals in the division round to advance to the NLCS for the first time since 2003. The New York Mets beat the Cubs in the 2015 NLCS 4 games to 1, before losing to the Kansas City Royals in the World Series.

The following season, the Cubs had the best record in MLB, won the Central Division, and defeated the Giants in the divisional series and the Dodgers to clinch their first NL pennant since 1945. The Cubs ended their World Series drought, beating the Indians 4 games to 3, winning their first World Series title since 1908.

The Cubs won their division again in 2017 and advanced to their third consecutive NLCS after beating the Washington Nationals in the divisional round. The Cubs were bounced from the playoffs by the Dodgers, losing the NLCS in five games.

In 2018, the Cubs made it to the postseason for the fourth year in a row, the first time in team history that has happened. It was the club’s third playoff appearance as a Wild Card team. The Cubs hosted the Colorado Rockies in the Wild Card Game and lost 2-1 in 13 innings.

The 2020 MLB season was cut to 60 games because of the COVID-19 pandemic. The Cubs ended the regular season with a 34-26 record, winning their sixth Central Division title. The Cubs were then eliminated in the first round of the playoffs by the Miami Marlins, losing both games of the best-of-three series.

As of 2021, 11 of those 15 players appear in the Baseball Hall of Fame wearing a Cubs cap on their respective plaque. Brown, Evers, and Tinker do not have a logo on their Hall of Fame plaques, while Sutter has a Cardinals cap on his.

The Chicago Cubs have six retired numbers including #42 for Jackie Robinson.

The following numbers have been retired by the Cubs for players who were on the team throughout the franchise’s history; 10, 14, 23, 26, 31. The #31 is retired for two players.

Ron Santo played in 2,102 games for the Cubs from 1960-1973 and was a nine-time All-Star third baseman during his Cubs career. Following his playing days, Santo remained a beloved figure in Chicago and served as the team’s radio color commentator from 1990-2010. Santo was inducted into the Hall of Fame in 2012.

Ryne Sandberg was a 10-time All-Star second baseman with the Cubs and also won nine gold gloves for his defensive work. The right-handed hitter finished his career as a .285 hitter, with 282 home runs and 1,061 RBIs. Sandberg went into the Hall of Fame in 2005, the same year the Cubs retired his number.

“Sweet swinging” Billy Williams was the second player in team history to have his number retired. Williams was a six-time All-Star and was named 1961 National League Rookie of the Year with the Cubs. He was elected to the Baseball Hall of Fame in 1987, after hitting 426 home runs in his career.

The Cubs waited until 2009 to retire the #31 as Greg Maddux joined fellow pitcher Ferguson Jenkins in the Baseball Hall of Fame that year. Jenkins led the National League in wins twice during his career, making four All-Star teams and winning the 1971 Cy Young Award. Maddux led the National League in wins three times and won the ERA title in the National League four times during his career. Maddux was also an eight-time All-Star and won the Cy Young Award in four consecutive seasons, from 1992-95. Jenkins was elected to the Hall of Fame in 1991, while Maddux was inducted in 2009.

Who could be the next Cubs Hall of Fame Player?

Sammy Sosa is still on the Hall of Fame ballot, but voters haven’t been kind to the steroid era sluggers, Sosa included. It’s possible Sosa can make it via the veteran’s committee. Jon Lester could be a Hall of Famer, but he also has ties to the Boston Red Sox.

What Cubs player will be next to have their number retired by the team?

Sammy Sosa is the logical answer, as he carried the franchise for the better part of a decade. However, the relationship between the team and the former slugger remains less than ideal. Although loved by many in the fan base, Sosa’s number might not be retired in the immediate future.

Who is the Cubs’ all-time leader in home runs?

Who is the Cubs’ all-time leader in hits?

Cap Anson is the Cubs’ all-time leader in hits according to Baseball-Reference, which lists his hit total at 3,012 when he was with the Chicago White Stockings. Ernie Banks is second on the all-time Cubs hit leaderboard with 2,583, which is ahead of Billy Williams, who had 2,510 hits with the Cubs.

Who is the Cubs’ all-time leader in strikeouts by a pitcher?

The all-time strikeout leader in Cubs history by a pitcher is Ferguson Jenkins. He struck out 2,038 hitters in his Cubs career. Jenkins is the only pitcher on the list with more than 2,000 strikeouts. Carlos Zambrano, Kerry Wood, Charlie Root, and Rick Reuschel round out the top-five for most strikeouts.

Who is the Cubs’ all-time leader in wins by a pitcher?

Who have been all the owners of the Cubs?

What is the Billy Goat Curse?

This curse that supposedly kept the Cubs from winning the World Series until 2016, started because Billy Goat Tavern owner William Sianis’ pet goat named Murphy was bothering fans during Game 4 of the 1945 World Series. He was asked to leave and Sianis declared, “them Cubs, they ain’t gonna win no more.”