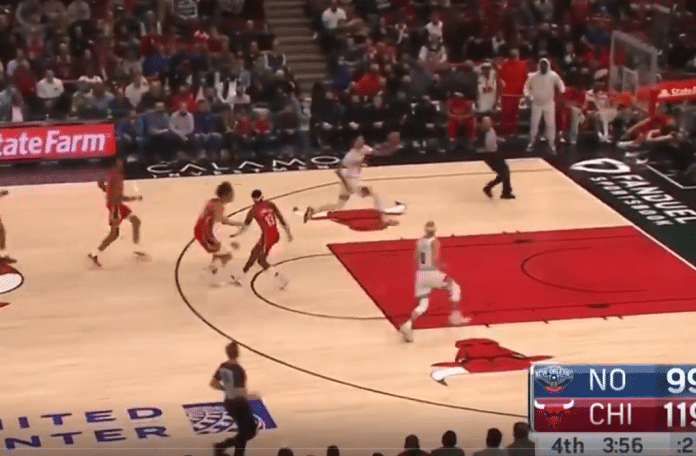 The Chicago Bulls were out to make a statement in their home opener against the New Orleans Pelicans. Not only did they do that in blowout fashion, but they provided an incredible list of highlights along the way. Nobody was more fun to watch on the night than Lonzo Ball. The team’s major free agent addition has lived up to the hype in every way. He was everywhere doing everything. Shooting? Passing? Defense? Yep.

On a night where he delivered a triple double in just his second game, Ball fittingly capped everything with a bang. Needing one more assist to notch the accomplishment, the Bulls got out on a fast break. Alex Caruso delivered a pass to Ball. Rather than just go for the basket himself, the point guard decided to let his teammate have more fun. This courtesy of a terrific lob that Caruso slammed home on an alley-oop.

It was a fun night.

Chicago cruised to a 128-112 victory. Lonzo Ball finished with 17 points, 10 rebounds, and 10 assists. He also had three steals and a block. In a game where Zach Lavine scored 32 points, there was no denying that Ball was the best player on the floor. A surefire sign of how much better this team has gotten in the past few months. Arturas Karnisovas had a plan and it looks like he executed it to perfection.

Are the Bulls contenders? It’s too early to say. The Eastern Conference isn’t short on good teams. That said, there is no denying this is an improved basketball team. They have multiple offensive options and now seem much better on defense. Ball is a big part of all that. It is no wonder the organization has worked so hard to acquire him dating back to last season. Two games in and he looks worth every penny.