There was a lot of noise heading into tonight around what the Chicago Bulls would do with their first-round pick. The team has been tied to multiple trade rumors ranging from Rudy Gobert all the way to Kevin Durant. Were they going to include the 18th pick in a potential deal to land one of the above stars? No one really knew what to expect. Draft night is always crazy. Obviously, they decided to keep the pick as they end up selecting 6’7″ Arizona point guard Dalen Terry. It’s a great pick overall but is there an even deeper meaning behind it? Stay with me here.

Reports surfaced today that Kyrie Irving might be on the move which in turn would likely lead to Kevin Durant requesting a trade himself. Obviously, this has led to a lot of rumors and speculation as to where KD might end up. Brooklyn isn’t going to be able to just send him to the highest bidder. KD will have the final say. He is going to want to be in a situation that fits him and allows him to contend. Would Chicago make sense? I think it would. And perhaps Artūras Karnišovas and Marc Eversley do too. The funny/interesting thing is, it looks like their most recent addition, Dalen Terry, has ties to KD. 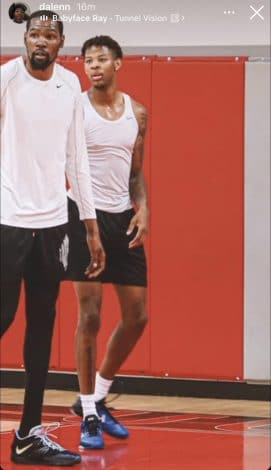 I did a little digging and found out this was posted back in June on Dalen’s Instagram story. I verified the username and it does belong to Dalen. The two were clearly in the lab together and working on their craft.

Is this strictly a coincidence? Perhaps. But maybe AK and Co. are playing chess while everyone else is playing checkers. Is Dalen the Coby White replacement who could very well be involved in a trade package to land KD? It makes sense but then again I do really want to see KD in red and black so this could be a stretch. All in all, I think it’s pretty cool that these two do have a connection. It will make this NBA off-season even more interesting as the Kevin Durant sweepstakes seem to be well on their way. Let’s just hope it ends up with him catching lobs from Lonzo.

KD would be temporary. If you are close to a championship, then sign him.
But, don’t expect KD to stay around for long. You cannot build a dynasty or legacy with KD.

No thanks stay in brooklin