The Bulls were one shot away from getting things back on track last night against the Golden State Warriors. After opening the season with a 20 point and 19 point loss the Bulls needed to bounce back and get a win. Last night they came up just short of getting that much-needed victory. With five seconds left in the game, Bulls SG Zach LaVine put the team up by two with 5 seconds remaining. The Bulls just needed to make a stop and they had the win. Unfortunately, that didn’t happen as the Warriors hit a three and the Bulls fell to 0-3.

This loss stung more than the first two. The Bulls offense looked like they were clicking for the first time this season and put themselves in a position to win. All of that came crashing down as the defense couldn’t get it done on the final possession. The Bulls are sitting in a pretty poor position considering what’s to come on their schedule. The Bull’s schedule over the next 12 games includes teams like Milwaukee, Dallas, Boston, both LA teams, and the Wizards. This is not going to be an easy stretch for a team that’s already struggling. However, don’t lose hope just yet. There are a few things the Bulls can do to right this ship before it gets out of hand.

The main reason the Bulls got blown out in the first two games was that the teams they were playing were capitalizing off of the turnovers. Last night the Warriors weren’t taking advantage of the Bull’s many turnovers.

The Bulls have averaged 20.3 turnovers over the first 3 games. If teams are capitalizing off those turnovers then the Bulls will have no chance to win. In the first two games, the Hawks had 29 points off turnovers and the Pacers had 25 that’s why the scores were so lopsided. One of the main focuses for this team needs to become limiting the turnovers and it begins with the starting unit.

The Bulls turnover leaders thus far include Zach LaVine, Coby White, and Wendell Carter Jr. The starting cast needs to set the tone for the rest of the team, and right now that’s not happening when it comes to turnovers. While this is something that doesn’t necessarily have one fix it needs to be a key focus for the Bulls if they want to stand a fighting chance over the next stretch of games.

The Bulls are allowing 126 points per game over the first three games and as you can see from above they are letting teams get to that 100 point mark early. While it has gotten better each game it’s still very bad. This young team has struggled mightily when it comes to defense. They were a terrible defensive team last season and that is trending the same way through three games. The Bulls are in the bottom tier of defensive teams thus far and that needs to be addressed. Head coach Billy Donovan appeared to be happy with the effort set forth on the final possession of the game but it still didn’t work out.

Donovan liked what he saw out of #Bulls' defense for most part on Warriors' game-winning 3. They took away Curry.

Satoransky jumped in effort to block inbounds pass, which caused him to trail Lee a bit right after initial pass, Donovan said.

There have been a lot of moments Donovan can use to teach this young team. While it sucks to watch there’s a lot that can be taken from these losses to help teach them. The defensive issues definitely need to be addressed ASAP.

Don’t be afraid to change up the lineups

It’s obviously important to allow the starters to get comfortable in their positions but that doesn’t mean they can’t be moved around midgame. This starting cast is young at an average age of 21.6. They need time as starters to learn and develop. However, Donovan can certainly mix up the lineups more to see what the best pairing is during the game. He has started to do that as the Bulls have come to full strength and he needs to continue doing so.

I’m late to it but just got done watching Bulls-Warriors.

I love this move.

Donovan has experimented in games like running with no backup center and putting different players in their non-dominant position. This team could go many different routes when it comes to lineups and Donovan needs to continue exploring that. This could be key to keeping the Bulls in games when the starters rest. It’s also a good way to mix things up and keep opponents on their toes. This is something that will take time to see who fits well with one another. This could be something that helps the Bulls in a bigger way than you think.

On to the next one

While this 0-3 start sucks there’s simply no time to dwell on it. The Bulls are back up and running tomorrow night against the 0-3 Washington Wizards. The Bulls will meet them two games in a row and don’t let their record fool you. While they are in the same boat as the Bulls they at least have some better weapons that the Bulls do offensively. The Bulls will still need to lock down defensively in order to not let PG Russell Westbrook take over. Billy Donovan has his work cut out for him as he will have to make adjustments quickly with the condensed season. 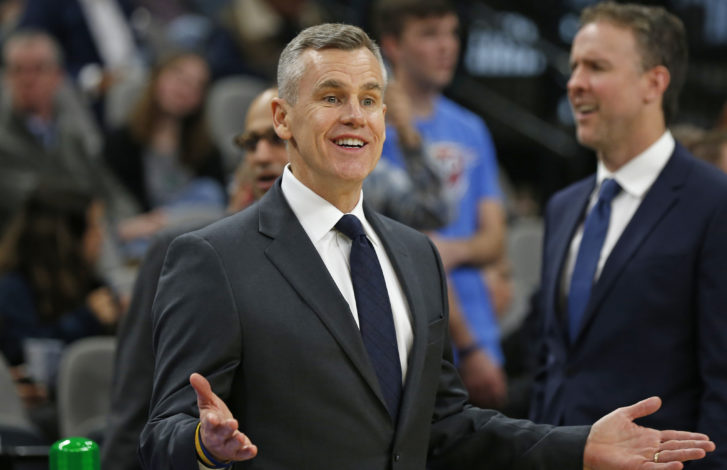 This young team is going to make mistakes but Donovan needs to make adjustments to limit those mistakes. There is a lot of work to be done and the Bulls need to get it figured out quickly. If they can’t make the necessary adjustments this could be a very long season for this team.