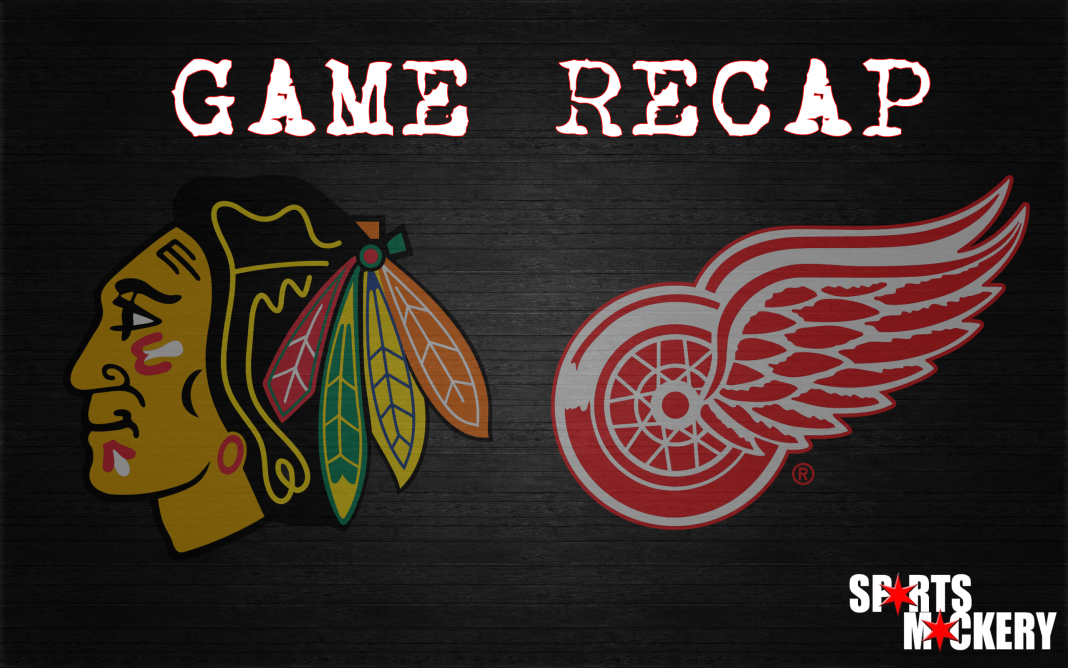 The Chicago Blackhawks defeated the Detroit Red Wings 4-1 on Friday night in their home opener to earn their first victory of the 2021 regular season. Patrick Kane (one goal, one assist), Dylan Strome (two assists), and Alex DeBrincat (two assists) each recorded two points, but goaltender Kevin Lankinen was named the first star of the game after a tremendous performance in goal. Lankinen, 25, stopped 30 of 31 shots faced to earn his first NHL win and kept the Blackhawks with a comfortable lead in the dwindling minutes of the contest.

Kevin Lankinen: No. 1 star of the game after stopping 30 of 31 shots for his first career NHL win. #Blackhawks pic.twitter.com/AJ6kCSCYiX

“What can I say? Friday night in Chicago, home opener at the United Center, get your first NHL win… feels awesome,” Lankinen said during his post-game Zoom conference. “I would lie if I would say a [shutout] didn’t cross my mind… But I wanted the win so bad. I wanted to win whatever it takes.”

Have The Blackhawks Found Their Goaltender?

Lankinen was the star of the show on Friday, looking far from a rookie in just his second game of NHL action. Although, even in his debut on Tuesday against the Florida Panthers, Lankinen kept his composure and made all the stops he was supposed to. With the defense providing their best 60-minute effort of the young season against Detroit, the Finnish netminder was able to steer the Blackhawks to their first win.

“Made some huge saves for us, especially early on to keep us in the game,” Kane said about Lankinen’s effort. “He was great tonight and he’s a confident kid. He believes in himself.”

With an exceptional performance last night, Lankinen will likely get his third consecutive start for the Blackhawks on Sunday in their second game of the series against the Red Wings. As for the open competition in goal for the Blackhawks, clearly, Lankinen is the front runner at the moment, but it’s still too early to tell if he will be their go-to guy going forward.

Coming into Friday, the Blackhawks had tallied power-play goals in all four games to start the season. Who saw that coming? Well, that streak was extended to five games in last night’s victory thanks to Kane and Andrew Shaw.

With just under seven minutes to play in the first period, Strome centered a pass towards the slot, and Kane corraled the loose puck and beat Wings’ goaltender Thomas Greiss to put the Blackhawks up 1-0.

Strome makes a nice feed to Kane down low, and ‘Showtime’ put its home to extend his point streak to four games! The #Blackhawks also now have PPG’s in 5 consecutive games to start the year!pic.twitter.com/kV25q6I5LK

Then, early in the third period, the Blackhawks pulled off a perfect passing play, capped off by a Shaw back-door tap-in for his first goal since November 17, 2019.

DeBrincat➡️Kane➡️Shaw🚨#Blackhawks pull off a perfect passing play for their 2nd PPG of the night to go up 3-0! Kane & DeBrincat both now have two-point games. Shaw scores his 1st goal since Nov. 17, 2019. pic.twitter.com/KSeu24qwlb

As a result of their two power-play goals on Friday, the Blackhawks now have the NHL’s third-best powerplay with a 41.2 percent conversion rate. Only the Dallas Stars (62.5 percent, but only through one game) and Toronto Maple Leafs (44.4 percent) have been better on the man advantage so far.

Finally, Some Stellar Play By The Defense

In addition to the Blackhawks’ success on the powerplay, the penalty kill also put together a great outing on Friday. For just the second time in 2021, the Hawks did not allow a power-play goal, and they went five-for-five while shorthanded. Mattias Janmark was also credited with a short-handed goal on his empty-netter to seal the deal.

Not only did the Blackhawks’ defense hold Detroit to just one goal, but they also provided offensively as well. Calvin de Haan tallied the game-winning goal near the midway point of the game, and Ian Mitchell was credited with the secondary assist for his first NHL point. A bunch of first for the Blackhawks on Friday.

If the Blackhawks can continue to help out their goaltender and win the special teams battle, then there will plenty more victories to come in 2021. 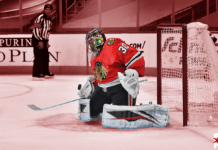 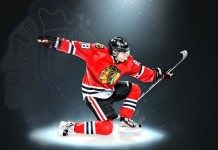 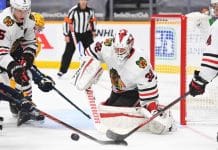 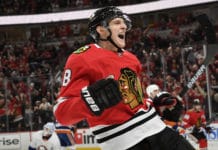