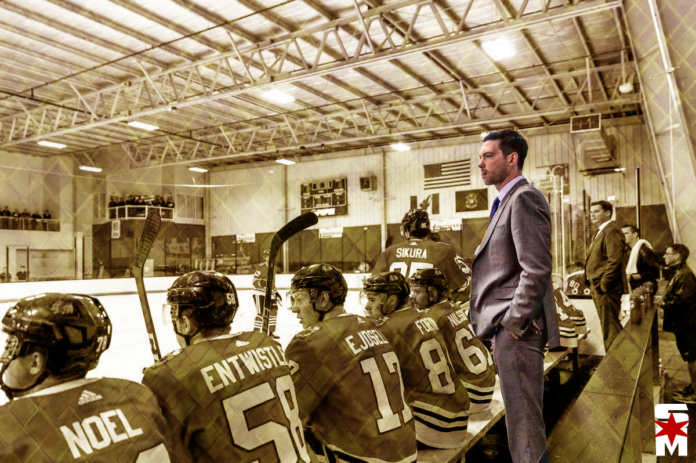 People couldn’t understand what the Chicago Blackhawks were doing. How could they justify keeping Jeremy Colliton as the head coach even as the team spiraled out of control to start the 2021-2022 season. A year that started with such optimism after their aggressive moves in the offseason. Once GM Stan Bowman was forced to step down, it felt like the time might finally come for Colliton to get axed.

Still, nothing. At last on the three-year anniversary of the man taking over the job from Joel Quenneville, Colliton received word from interim GM Kyle Davidson that he and other members of his staff were being dismissed. Derek King, the head coach of the Rockford IceHogs, will be taking over in his place. He’ll try to dig the team out of their 1-9-2 start to the season. One of the worst Chicago has had in many years.

Interim GM Kyle Davidson made the call. Derek King will be the interim coach.

Colliton never lived up to expectations in Chicago.

He came in with a lot of promise but failed to turn around the Chicago Blackhawks in the wake of Quenneville’s departure. The head coach went a combined 86-83 during his first three seasons, making the playoffs just once and losing in the first round to Las Vegas. Expectations were high after an offseason that seemed to see the team improve their overall roster. Particularly on defense. Then they went on to lose their first nine games of the season.

Not only that but the team has allowed at least four goals in eight games.  There is no excuse for how poorly they’ve played. Fans wanted Colliton out months ago. Only now after a 5-1 humiliating loss to the Jets did they finally oblige. It isn’t certain whether King will remain the coach moving forward or even if Davidson will remain the GM. For the time being both are placeholders until ownership sorts this mess out.