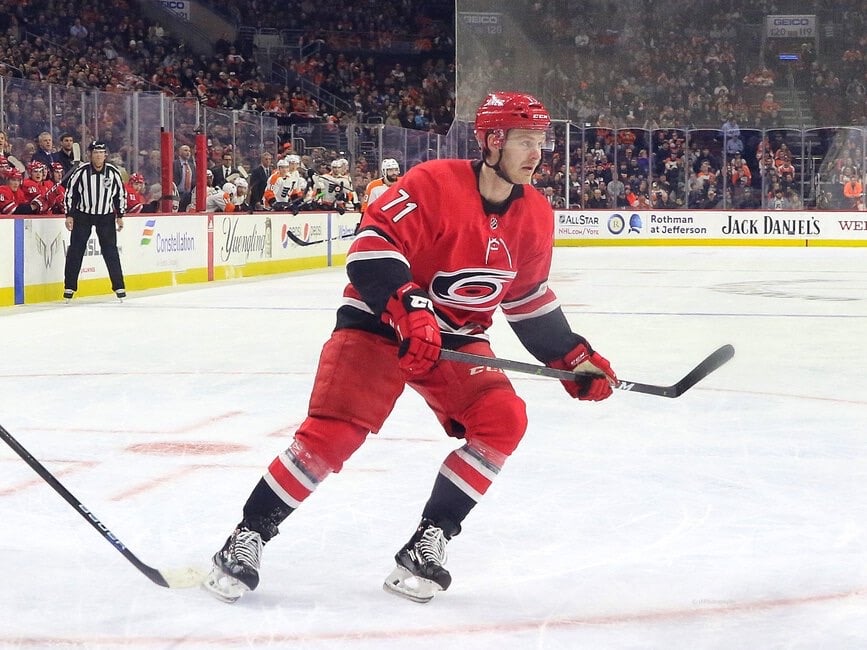 Wallmark, 25, was a fourth-round pick by the Carolina Hurricanes in the 2014 NHL Draft.

The Chicago Blackhawks have reportedly signed center Lucas Wallmark to a one-year, $950,000 contract, according to TSN’s Pierre LeBrun. Wallmark recorded 25 points (12 goals, 13 assists) in 67 games split between the Carolina Hurricanes and Florida Panthers last season. The 6-foot, 176-pound center was part of the trade that sent Vincent Trocheck from Sunrise to Raleigh at the trade deadline.

Hearing UFA Lucas Wallmark has agreed to terms with the Chicago Blackhawks. One year, $950k.

Wallmark became an unrestricted free agent last week when the Panthers did not tender him a qualifying offer. The Swedish forward has 56 points (23 goals, 33 assists) in 167 games across four NHL seasons.

After signing Mattias Janmark to a one-year contract on Monday morning, the Blackhawks bottom six was already starting to get a bit crowded. The addition of Wallmark makes it a full-blown logjam. GM Stan Bowman ensured that the young players down in Rockford (Kurashev, Entwistle, etc) would get their opportunity to play this season, but his actions are not matching up with his words.

One thing is clear. Bowman is obviously addressing the team’s defensive woes this offseason. Janmark and the 6-foot-6 Nikita Zadorov were brought in to help out on the penalty kill and in the defensive zone. Wallmark will be asked the same.

A natural center, Wallmark has never had a season with a faceoff-win percentage below 50 percent. He won 50.3 percent of his faceoffs in 2019-20 and is 50.9 percent for his career. Wallmark also averaged over one minute per game on the Hurricanes’ fourth-ranked penalty kill last season.

The Blackhawks have entirely too many forwards for a limited number of roster spots. Bowman is likely not done making moves. Restricted free agent Dylan Strome has yet to sign with the Blackhawks since the free-agent window opened last Friday, and the addition of a solid faceoff man like Wallmark could make him expendable.

Zack Smith was unable to be bought out last week due to an injury, but there could be a chance to trade him if the Blackhawks are willing to retain salary. No one wants to pay a fourth-liner over $3 million this season, which is precisely the problem with trying to move him.

On the defensive side of things, the addition of Zadorov makes either Calvin de Haan or Connor Murphy expendable as well. With Zadorov, Duncan Keith, Adam Boqvist, and Brent Seabrook all (theoretically) locked in for next year, plus Ian Mitchell, Wyatt Kalynuk, and Lucas Carlsson on the horizon, there is no room for both de Haan and Murphy. The former carries the higher cap hit of the two at $4.55 million over the next two seasons. Murphy will only cost the Blackhawks $3.85 million over that same timeframe, which makes de Haan the likely candidate.