The Chicago Blackhawks, along with each of the 30 other NHL teams, will play a 56-game regular season in 2021 rather than playing 82 games. The 2019-20 NHL season was forced into a pause from March 11 through July 1 due to the COVID-19 pandemic, pushing the 2020 Stanley Cup Final all the way back until early October when the 2021 regular season was supposed to begin. As a result, the NHL’s only option was to push back the start date for 2021 and have a shortened campaign. Regular-season contests begin on Wednesday, January 13, and run through Saturday, May 8. 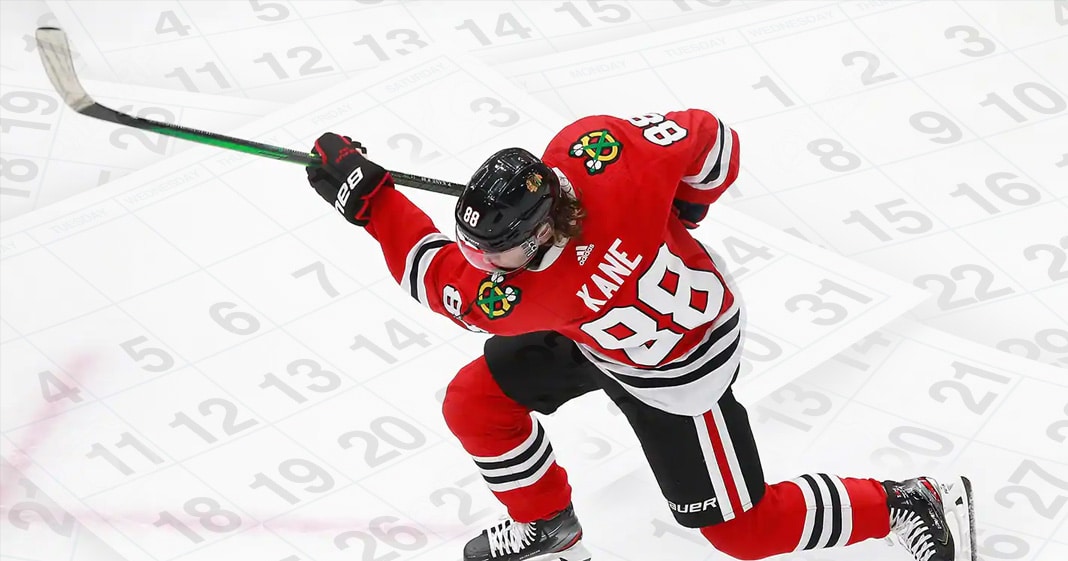 With COVID-19 cases continuing to surge across the United States, the NHL decided to realign its four divisions for 2021 to minimize the amount of travel. The Blackhawks remain in the Central Division, which is technically now the Discover NHL Central Division, but the rest of the division has taken a completely new shape. The rival Dallas Stars and Nashville Predators are the only other clubs to remain in the Central, while the Carolina Hurricanes, Columbus Blue Jackets, Detroit Red Wings, Florida Panthers, and defending Stanley Cup champion Tampa Bay Lightning now fill out the rest of the division. Carolina and Columbus moved over from the Metropolitan Division, and Detroit, Florida, and Tampa Bay moved from the Atlantic Division.

Another change to the schedule in 2021 is that all teams will play only divisional opponents in the regular season. In the Discover NHL Central Division, teams will play each other eight times. All 31 clubs are allowed to play in their own arenas, with fan attendance varying from team-to-team. The Stars and Lightning are two teams currently expected to allow around 5,000 fans at their home contests.

The NHL will return to a 16-team, best-of-seven, four-round playoff format following the 2021 regular season. Four teams from each division will qualify for the postseason, and the first two rounds will be intradivisional play. Then, the four division winners moved forward to the semifinals and reseeded based on their regular-season points. The two final teams will matchup in the Stanley Cup Final, which is expected to begin in early July.

The Blackhawks and their fans grew accustomed to finishing at the top of the Central Division from 2010-2015, but life post dynasty era has not been filled with similar success. However, after winning the Stanley Cup in 2015, the Blackhawks went 47-26-9 with 103 points in 2015-16 and finished third in their division behind the Stars (109) and St. Louis Blues (107). Patrick Kane recorded 106 points (career-best 46 goals, 60 assists) and won the Hart Trophy for NHL MVP, and his sidekick Artemi Panarin racked up 77 points (30 goals, 47 assists) and took home the Calder Trophy for NHL rookie of the year. But the dynamic duo was not able to lead the Blackhawks past the hated Blues in the first round of the playoffs, losing the series in a heartbreaking seventh game in St. Louis.

In 2016-17, the Blackhawks put together one of the best seasons in franchise history with a 50-23-9 record and 109 points. The Hawks topped the Minnesota Wild by three points to win the Central Division and were awarded the first seed in the Western Conference. Once again, Kane and Panarin led the way on offense, and Duncan Keith, Brent Seabrook, and company held down the fort on defense. Corey Crawford also recorded his third consecutive 30-win season in the net and had the Blackhawks primed to make yet another run for the Stanley Cup. But in the first round of the playoffs, the eighth-seeded Predators shocked the world and swept the Blackhawks in four games. Preds’ goaltender Pekka Rinne pitched a shutout in Games 1 and 2, and the Hawks finished with a miserable three goals COMBINED in the series. In the following offseason, general manager Stan Bowman traded away Panarin and warrior defenseman Niklas Hjalmarsson. Future first-ballot Hall-of-Famer Marian Hossa was forced to retire due to a skin condition. The Blackhawks have seemingly never recovered.

While the Blackhawks were expected to take a step back in 2017-18 after trading away a couple of key players, no one anticipated a drop off to the NHL’s bottom. Captain Jonathan Toews had the worst statistical year of his career (52 points). Crawford suffered a season-ending concussion in December. Brandon Saad and Connor Murphy struggled to fill in for Panarin and Hjalmarsson. Consequently, the Blackhawks finished last in the Central Division with a 33-39-10 record and 76 points. For the first time since 2007-08, the Blackhawks failed to qualify for the Stanley Cup Playoffs.

After a disastrous season, Bowman and the Blackhawks’ front office made very few moves to improve the team heading into 2018-19. Veterans Chris Kunitz and Cam Warm were their two “notable” offseason acquisitions, and European prospects Dominik Kahun, David Kampf, and Jan Rutta were brought in from overseas to provide depth. The Blackhawks got off to a shaky 6-6-3 start through 15 games and made the controversial decision to fire head coach Joel Quenneville after 11 seasons. At the time, Quenneville was the longest-tenured head coach in the NHL. The Blackhawks named Jeremy Colliton as Quenneville’s replacement and finished sixth in the division with a 36-34-12 record and 84 points. While the Blackhawks may have missed the playoffs for a second consecutive year, young players like Alex DeBrincat, Erik Gustafsson, and the newly-acquired Dylan Strome had tremendous seasons that showed promise for the future. Toews also bounced back and set career-highs in goals (35), assists (46), and points (81).

With a full offseason and training camp under Colliton’s belt, the Blackhawks headed into the 2019-20 regular season with hopes of cracking the Stanley Cup Playoffs. Robin Lehner and Crawford gave the Hawks the NHL’s best one-two punch in goal, and the additions of Calvin de Haan and Olli Maatta provided an immense boost to the aging defense. Kane and Toews carried the torch per usual, and thanks to outstanding goaltending, the Blackhawks were 32-30-8 with 72 points through 70 games when the NHL paused the season due to COVID-19. After much debate, the NHL and NHLPA agreed upon a 24-team postseason in 2020 beginning on August 1, with the Blackhawks sneaking in as the 12th and final seed in the Western Conference. In their best-of-five play-in series against the five-seeded Edmonton Oilers (37-25-9, 83 points), the Blackhawks pulled off a sizeable upset and won the series in four games. Unfortunately, their momentum did not carry over into the first round against the top-seeded Vegas Golden Knights, as the Blackhawks lost the series in five games. But even with the season coming to a disappointing conclusion, the Blackhawks fought hard throughout the playoffs. They gave top prospects like Kirby Dach, Dominik Kubalik, and Adam Boqvist valuable postseason experience early on in their careers.

The Blackhawks are allowed to play all 28 of their home games in 2021 at the United Center in Chicago, but fans will not be permitted for at least the beginning of the regular season. Only a select few teams have announced they will allow a limited number of fans at their home games, with all three being in the Discover NHL Central Division. Dallas, Florida, and Tampa Bay will have roughly 5,000 fans on hand early in the season. With teams only playing intradivisional contests in 2021, the Blackhawks will see those three clubs early and often.

After opening the season with four consecutive games on the road, the Blackhawks will have their home opener on Friday, January 22, against Red Wings’ long-time rival. Detroit left the Central Division after the 2012-13 season to move to the Eastern Conference, and the Blackhawks got the last laugh by overcoming a 3-1 series deficit and besting the Wings in seven games during the 2013 Stanley Cup Playoffs. Thanks, Brent Seabrook. The Blackhawks host the Red Wings for two games in three nights and then return home next on Friday, January 29, for a four-game homestand against the Blue Jackets (1/29, 1/31) and Hurricanes (2/2, 2/4).

From February 7 through March 22, the Blackhawks only play seven games at home (Columbus, 2/11-2/13, Detroit, 2/27-2/28, and Tampa Bay, 3/4,-3/7) compared to 14 on the road. But after a rugged stretch in the schedule, the Blackhawks have their longest homestand of the season from March 23 to April 1, spanning six games. Six of their next eight games following the homestand come on the road, but the Blackhawks wrap up the regular season with seven of nine back at the United Center. They finish the year at home on Saturday, May 8, against Dallas.

The Blackhawks open up the regular season on Wednesday, January 13, in Tampa Bay against the Lightning for their 2020 Stanley Cup banner ceremony. After a two-game series against the top team in the division, the Blackhawks head over to Sunrise, Florida, for a pair of contests against former head coach Joel Quenneville and the Panthers (1/17, 1/19). Quenneville’s Panthers are not thought of as a playoff contender in 2021 and could be an ideal squad for the Hawks to squeak out a few ugly wins against.

Who are the toughest teams in the Discover NHL Central Division?

The Lightning, Hurricanes, and Stars are likely to finish as the top three in the division in 2021. Tampa Bay has most of the core returning from their Stanley Cup team, and Carolina and Dallas have two of the deeper rosters in the NHL.

Who are the worst teams in the Discover NHL Central Division?

The Blackhawks and Red Wings are undoubtedly the bottom two teams, but the Panthers, Blue Jackets, and Predators all have a chance to finish near the bottom of the division as well. As a whole, the Discover NHL Central Division is not very deep.

Where will the Blackhawks finish in the division?

With the team currently in the rebuilding process and Jonathan Toews, Kirby Dach, and Alex Nylander out of the lineup indefinitely, the Blackhawks are in line to finish towards the bottom the NHL standings in 2021, let alone the division. Chicago and Detroit are expected to finish seventh and eighth in the Central.

How will Joel Quenneville and the Florida Panthers fare?

Florida took a bit of a new shape this offseason by bringing in Patric Hornqvist, Radko Gudas, and former Blackhawks Vinnie Hinostroza and Anthony Duclair offseason. The superstar power is there with Barkov, Huberdeau, and Bobrovsky in net, but the lack of depth may hold them back. It could be an up and down year for Coach Q and the Panthers.

Is head coach Jeremy Colliton on the hot seat in 2021?

Now that Dach, Toews, and Nylander are out, the Blackhawks’ expectations in 2021, which were already fairly low, took an even further dip. But even if the Hawks finish toward the bottom of the NHL, it is hard to judge Colliton by the outcome of the season with so many pieces missing.

Will the Blackhawks be sellers at the trade deadline?

The focus in Chicago is now on the youth movement, and with the 2021 regular season looking like a wash, the Blackhawks will likely be trying to ship away a couple of older players at the trade deadline. Look for Carl Soderberg, Calvin de Haan, Zack Smith, and possibly Andrew Shaw to move in April.

Which Blackhawks prospects will step onto the scene in 2021?

Top defenseman prospect Ian Mitchell finally made the jump to the NHL this offseason and could take on a top-four role for the Blackhawks in 2021. Philipp Kurashev and Pius Suter are two forward prospects who are cracking the lineup with Dach, Toews, and Nylander.

Who will be the Blackhawks captain without Jonathan Toews?

The Blackhawks will likely move forward with three alternate captains instead of naming another captain in place of Toews. Kane, Keith, and Seabrook are the obvious candidates, but if one were to get injured, look for Connor Murphy or Alex DeBrincat to be honored with a letter.