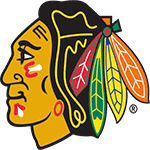 After finishing last in the Central Division for the Eastern Conference (32-30 with 72 points), the Chicago Blackhawks have several rumors surrounding the team. Jonathan Toews and Patrick Kane are now 32 years old and the Blackhawks find themselves in the middle of a rebuilding phase. This section covers all Chicago Blackhawks rumors and gossip. We report on trade speculation, free agent chatter, and anything concerning the future of the Blackhawks. After two seasons as head coach, Jeremy Colliton has a 62-58 record. Let’s hope he can resurrect the dynasty and bring success back to the Blackhawks in 2021. With the pressure mounting, it will be interesting to see how Colliton and the Blackhawks respond to the pressure in Chicago. Blackhawks fans have become used to winning, they won’t tolerate mediocrity for very long. 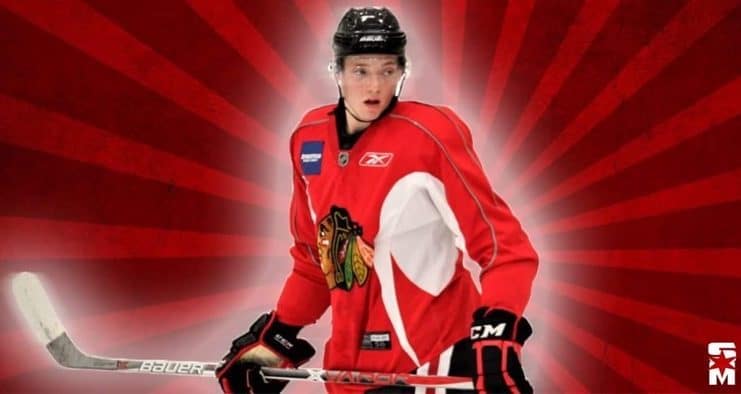 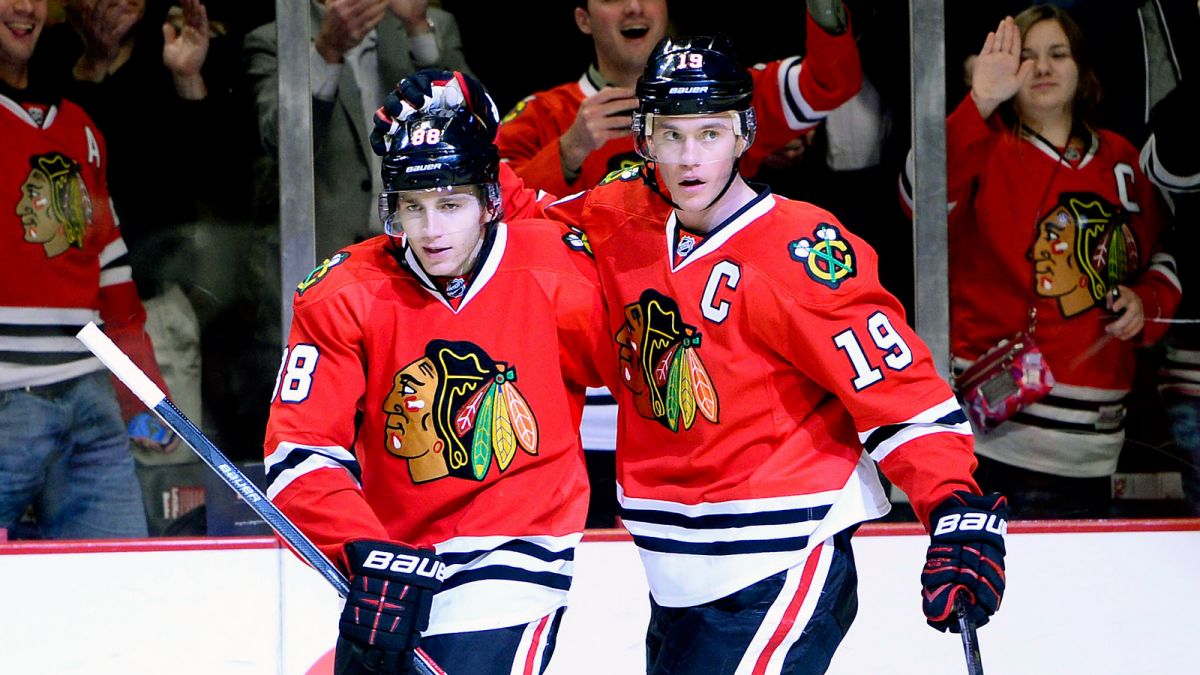 The Blackhawks would have had a chance at landing the No. 1 overall pick in the 2020 NHL Draft had they not defeated the Edmonton Oilers in the best-of-five play-in series. Instead, they wound up with the 17th selection in the first round and tried to trade up with the Nashville Predators and Winnipeg Jets at Nos. 10 and 11. A deal could not be reached, and the Blackhawks stayed at No. 17 and selected Reichel.

Restricted free-agent forward Dylan Strome has still not signed a contract extension with the Blackhawks, but the two sides will eventually reach an agreement. Strome is not arbitration-eligible, which means he does not have much of a bargaining chip in negotiations, and the Blackhawks are expected to play hardball with him this offseason.

With Crawford now in New Jersey, either Malcolm Subban, Collin Delia, or Kevin Lankinen will start in goal for the Blackhawks on opening night. Lankinen is the only one of the three netminders who does not have to clear waivers to be sent to the AHL, and that loophole in his contract likely will cost him an NHL roster spot at the start of the 2020-21 regular season. The Blackhawks cannot afford to lose either Subban or Delia through waivers at the moment.

The Blackhawks are likely done making major moves this offseason, but one player who still could be traded is a veteran defenseman, Calvin de Haan. The 29-year-old has two years left on his current deal with an AAV of $4.55 million, and the Blackhawks might want to make room on the backend with Seabrook expected to return and top prospect Ian Mitchell making the jump to the NHL.

After the additions of Wallmark and Janmark in free agency, plus the Pius Suter signing from overseas, the Blackhawks have a bit of a logjam in their bottom-six forward group. Veteran forward Zack Smith was expected to have his contract bought out, but because he was on long-term injured reserve with a back injury, the Blackhawks were not able to do so. The 32-year-old winger carries an astonishing $3.25 million cap hit for next season and a modified no-trade clause, which will make him hard to trade without sweetening the pot for another team. Smith likely will be stuck watching Blackhawks games from the press box more often than not next season if he cannot be moved.

It's hard to imagine a world where Kane is not the top player for the Chicago Blackhawks. When he's healthy, he's a top 10 player globally year in and year out, and arguably even top 5. Kane, who will turn 32 on November 19, has shown no signs of slowing down in the last few years. In 2018-19, 2007, the No. 1 pick recorded a career-high 110 points and 66 assists. Kane followed that up with 84 points (33 goals, 51 assists) in 70 games for the Blackhawks last season, and in the past decade, the Buffalo, New York native has averaged less than a point per game in just two seasons. He is a lock for the best player on the Blackhawks.

Fans have been tough on the Blackhawks captain since leading the team to their third Stanley Cup in six seasons and for fair reasons. Toews failed to record 60 points in three consecutive seasons from 2015-2018 and looked nothing like the dominant offensive player he was earlier in his career. His game's defensive side remained phenomenal, but Toews barely hit 20 goals in 2016-17 and 2017-18. In the midst of all the criticism, Toews responded with his best offensive season in the NHL in 2018-19 with 35 goals, 46 assists, and 81 points, all of which were career bests. In 70 games last season, Toews was second on the Blackhawks in points with 60 (18 goals, 42 assists). The days of 'Captain Serious' being the team's top-line center may be limited with Kirby Dach in his shadow, but Toews has answered back in a big way offensively the last two seasons and is still one of the best two-way players in the NHL.

Now at 37 years old, Keith is not nearly the same player he was during the dynasty era, but he remains the top minute-eater on the backend in Chicago for a reason and plays a vital part in the Blackhawk's success as a team. Last season, Keith averaged 24:23 per game, which was his highest in three years, and the two-time Norris Trophy winner has not led the Blackhawks in average time on ice in his 15 seasons with the team. Even though the offensive numbers likely will never return to an elite level, Keith is still the workhorse on defense for the Blackhawks. It will continue to play a large role in all scenarios throughout the rebuild.

The No. 3 pick in the 2019 NHL Draft got off to a slow start in his first professional campaign, but by the time the Blackhawks were in the playoffs, Dach was arguably the team's most noticeable player. In nine postseason games, Dach tallied one goal and five assists for six points and averaged 19:24 per game, which was more than five minutes higher than he averaged during the regular season. There were even a couple of games against the Vegas Golden Knights where Dach led all Chicago forwards in time on ice. Dach will likely slot in as the Blackhawks' second-line center next to Kane for the 2020-21 regular season, and the sky truly is the limit with his combination of size and skill.

After tallying 41 goals and 76 points in just his second NHL season, DeBrincat took a big step back last year. The former Erie Otter scored a career-low 18 goals and finished with just 45 points in 70 games. One possible reason for DeBrincat's struggles, though, could be his unusually low shooting percentage, as he shot nearly 10 percent worse than he did during his breakout 2018-19 campaign. DeBrincat will turn just 23 this December and is primed for a bounce-back year if he can get some better puck than he did in 2019-20. DeBrincat is a top-six winger for the Blackhawks and locked in as a key piece of rebuilding in Chicago.

Mitchell was one of the premier defensemen in college hockey the past couple of seasons with the University of Denver Pioneers. He served as captain last year and ranked in the top 10 before the COVID-19 pandemic canceled the season's remainder. The Blackhawks 2017 second-round pick (No. 57 overall) has been one of the system's top prospects for the last couple of years, and he will finally make his professional debut in 2020-21. Mitchell has the offensive upside and two-way skillset to become a top-pairing defenseman in Chicago if all goes well.

Reichel just turned 18 years old in May but immediately became the Blackhawks' top forward prospect when they drafted him with the 17th overall pick in October. The German winger already has two professional seasons under his belt with Eisbaren Berlin of the DEL and plays a style that should translate well to the NHL level. Reichel may not have the offensive upside to become a top-line forward, but he has a complete skill set and can make a difference without the puck on his stick. The Blackhawks 2020 first-round pick is expected to be NHL ready by the beginning of the 2022-23 regular season.

Suter took a very similar path to the NHL as Blackhawks winger Dominik Kubalik, who finished third in Calder Trophy voting last season after leading all first-year players with 30 goals. Both Kubalik and Suter signed a one-year, $925,000 contract with the Blackhawks after winning the NLA's MVP, the top league in Switzerland. Suter tallied 30 goals and 23 assists for 53 points in 50 games for the ZSC Lions, while Kubalik had 25 goals and 32 assists for 57 points in 50 games for Ambri-Pitta. Now, both the Blackhawks and Suter are hoping for Kubalik-like results in the NHL during the 2020-21 regular season. Suter likely will not tally 30 goals or find himself in the race for the Calder Trophy, but he still could play a crucial role in the depth scoring department for the Blackhawks next year.

The Blackhawks' 2018 fourth-round pick (No. 120 overall) burst onto the scene at the 2019 U20 World Juniors when he scored six goals in seven games for his native country of Switzerland. Kurashev recorded 19 points (seven goals, 12 assists) in 36 games in his first professional season with the Rockford IceHogs last season and is expected to make his NHL debut with the Blackhawks at some point in 2020-21. The 6-foot, 192-pound forward has played both center and wing so far in his career, but some worry about his faceoff ability at the NHL level. Regardless, Kurashev has the ability to make an impact on the wing as well, and he projects as a middle-six forward that can help the Blackhawks in all situations.

Kalynuk elected to let his draft rights expire this summer and signed with the Blackhawks as an unrestricted free agent. The 2017 seventh-round pick of the Philadelphia Flyers have made tremendous strides in his game since barely being drafted a few years ago. Kalynuk captained the incredibly talented Wisconsin Badgers in 2019-20 and recorded his third consecutive 25-point season before foregoing his senior year. The 6-foot-1, the 181-pound left-handed defenseman is expected to get a chance to make the Blackhawks opening night roster out of training camp, but with limited spots available, that is going to be easier said than done. Expect the talented offensive defenseman to look at some point during the 2020-21 regular season for the Blackhawks.

How long before the Blackhawks are competing for the Stanley Cup again?

After officially committing to the youth movement in October, the Blackhawks essentially threw in the white towel for 2020-21. The primary focus going forward is developing young players like Dach, Boqvist, Mitchell, Kubalik, etc., and hoping they can come together and create something special by 2022-23 or 2023-24.

How much longer do Patrick Kane and Jonathan Toews have in Chicago?

Kane and Toews are signed for the next three seasons with an AAV of $10.5 million and a full no-movement clause. Even when those contracts expire after 2022-23, it is hard to imagine the Blackhawks letting either player walk in free agency with all their history.