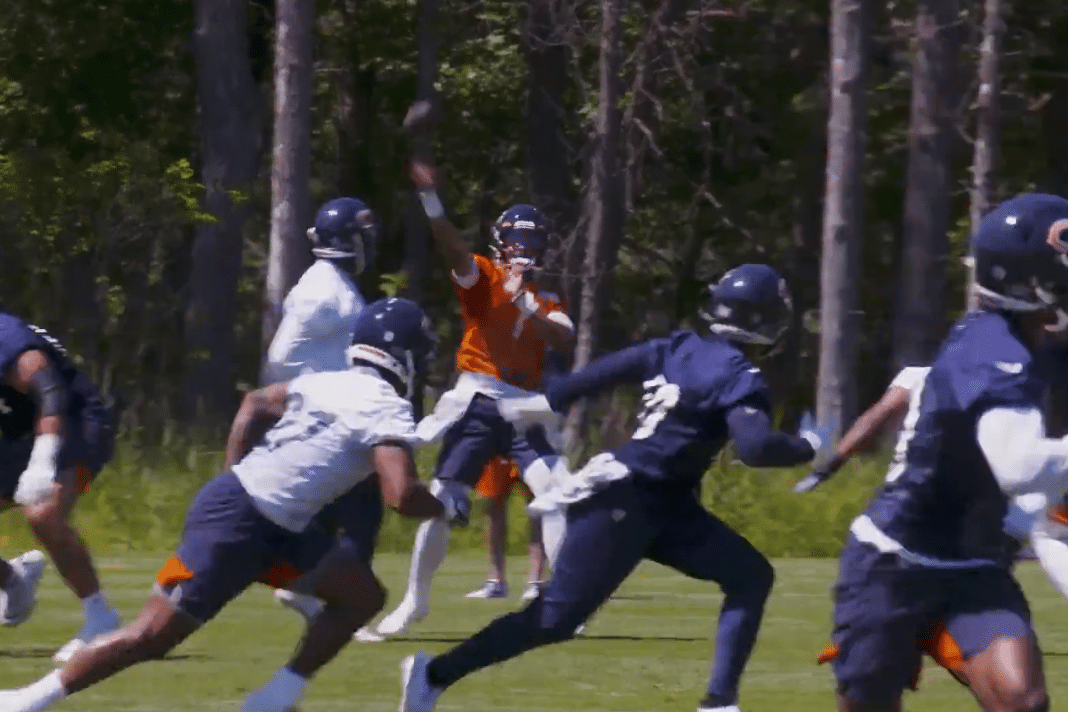 Justin Fields is the center of attention at Chicago Bears practices thus far. That is hardly a surprise. Fans know he is the future of the organization. The great hope for a franchise that has been haunted by quarterback missteps for decades. In him, they see somebody with the talent, work ethic, and mentality to finally end the curse. So they’ll take any little highlight they can get.

The Bears, to their credit, have provided them with a steady stream of clips in the past couple of weeks. They had another one locked and loaded after the second day of mandatory minicamps. Going through 7-on-7 drills, Fields is seen sliding to his left. He then fires an arcing pass that gets over the outstretched hands of linebacker Joel Iyiegbuniwe to wide receiver Damiere Byrd who had rookie corner Thomas Graham Jr. on his heels.

It was a pretty ball.

People shouldn’t underestimate the difficulty of that throw. Not only is it to the left, which is a bigger challenge for right-handed quarterbacks, but Fields has had to throw it with enough touch 15-20 yards down the field to get it over two defenders to a wide receiver who is only 5’9. Fields hit him in stride. That is a really good pass. The reaction by Riley Ridley on the sideline says it all.

For the quarterback, it is the type of throw he made several times during his run at Ohio State. People always talk about his arm strength, which is considerable. They constantly undersell how much touch he’s able to throw with. His accuracy is consistently good. Pro Football Focus rated him as the most accurate college QB they’ve ever tracked dating back to 2006. Obviously, the NFL is a different animal, but this demonstrates how good the kid can be.

Justin Fields time will come, and his coach is watching

Nagy admitted the rookie has stacked good days together with the most recent being among his best. The head coach is excited just like everybody else. However, the man remains resolute. He is not going to deviate from the plan he and the rest of the coaching staff have constructed. They will go with Andy Dalton this year. Fields will use that time to learn the offense inside and out while taking in the speed of the NFL from the sideline.

When the time is right, he’ll get the nod. No matter how hard the media or fans press the issue, Nagy hasn’t budged. He believes this course of action is the correct one. He saw it work in Kansas City. His mentor Andy Reid also used it to great success in Philadelphia too. There is plenty of merit behind sitting a rookie QB. However, it just isn’t the norm these days.

Most tend to start right away.

Justin Fields is clearly demonstrating that he could do that if the Bears asked. However, they don’t think it’s necessary. Not with a steady veteran like Dalton on the roster as well. He too has looked sharp in practices thus far. While he may not be what fans want, he’s shown he can produce when given help. If he does play well, then it should work out for the team in both the short and long term.